How to Face Unpleasant Chess Openings? 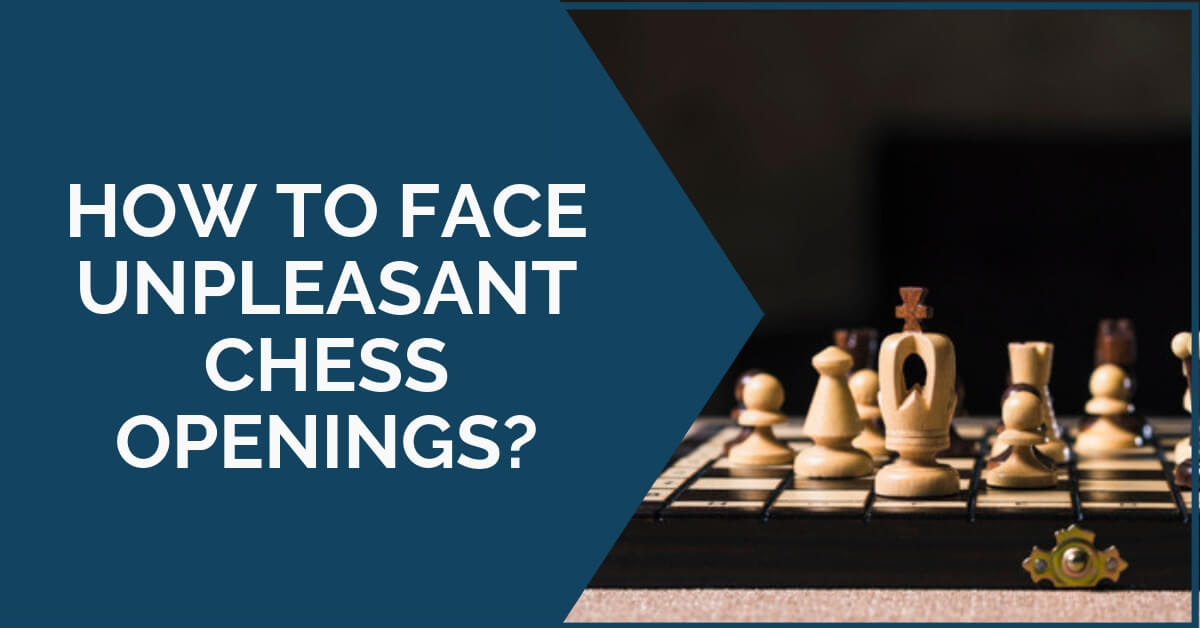 Unpleasant Chess Openings: There comes a moment in every chess player’s game preparation when he is faced with a variation he would not really like to see on the board. Let us take as an example the situation when a King’s Indian player faces the prospect of playing against the Exchange Variation. In such a situation the player has two choices – he can either allow the annoying variation or he can change his usual choice of 6…e5 (let us assume the player’s repertoire is the Mar del Plata variation where he enjoys his rich attacking chances) and play something like 6…Nbd7 or 6…Na6 (after 1 d4 Nf6 2 c4 g6 3 Nc3 Bg7 4 e4 d6 5 Nf3 0-0 6 Be2).

None of the two seem appealing.

Allowing the exchange on e5 changes the character of the game completely, as opposed to the Mar del Plata or the other lines like the Petrosian Variation (7 d5) or the Gligoric Variation (7 Be3), where Black has a complex strategic battle to look forward to.

The deviations with 6…Nbd7 or 6…Na6 also change the character but in a different manner – there the positions remain strategically complex but are less sharp and less forcing. Additionally, these lines require quite some theoretical knowledge on their own. If the player had not studied them before, it is not very practical to start doing so a few hours before the start of the game.

While it is good to have flexibility with one’s openings, whether that be playing different openings or varying the sub-lines within one’s repertoire, there is something to be said about being principled and playing your openings no matter what.

Unpleasant Chess Openings: So what to do?

In the above situation of the “unfortunate” King’s Indian player, who is facing “a coward” who wants to take on e5, in case he decides to allow the Exchange Variation, the first thing he should do is accept the fact that this time perhaps he will not get the positions he likes. It is crucially important to mentally adjust to the possibility to play an equal endgame as opposed to the wild attacks in the Mar del Plata. Endgames require a different state of mind so it is important to do this work before the game.

The second thing is to be theoretically prepared for the endgame. In fact, the endgame, while objectively equal, can become very unpleasant for Black if he is not playing precisely.

Additionally, as in most “dead-drawn” lines, the position is not completely devoid of life, so a lot of patience can go a long way for Black. “Dead drawn” endgames are won with patience.

I have observed a curious phenomenon when it comes to the Exchange Variation in the King’s Indian Defence. In fact, the same applies to a lot of Exchange Variations – in the Slav, in the Spanish, in the French. What often happens is that the White player who chooses the Exchange Variation may think that simply by exchanging pieces a draw can be achieved easily. (Often this player is a weaker one and aims to make a draw.)

Nothing can be further from the truth! In fact, if we are talking about the King’s Indian, the pawn structure after the exchange on e5 is favorable for Black in view of the hole on d4 that cannot be defended by a pawn and it is actually White who needs to play precisely to avoid ending up in a strategically lost position.

As an illustration, let us take a look at a (relatively) famous game.

Here we are. The stronger player is facing the danger of playing a draw against a weaker one. Kasparov continues as if nothing happened.

Nowadays, players consider this imprecise. The best move is 9…Re8.

White’s best option here is 10.0-0-0 when Black has some problems to solve. But these theoretical nuances were not known in 1980.

It was better to take precautions against the attack on the e4-pawn and play 13.Nd2.

It was better for White to sacrifice the pawn and keep the pair of bishops. Perhaps White was hoping the opposite-colored bishops and the reduced material would help him draw easily? If so, it is a gross misconception, but one that less experienced players easily make.

Black is already strategically winning thanks to the hole on d4 and the more active bishop. The rest is a demonstration of Kasparov’s technique.

Sooner or later facing annoying variations is inevitable. It may not happen very often, but it will happen. A motivating thing to remember is that these lines are usually not the theoretically best lines, so the psychological edge should be with the player who faces them – it implies that the opponent shied away from the best moves in favor of a less critical line.

To stress again, the main preparation against annoying lines is psychological.

Acceptance, patience, and a calm state of mind are must-haves. Bear in mind that the opponent is avoiding the best lines and that he is most likely happy with a draw – these two factors give you a psychological advantage even before the game has started because he has already placed himself in an inferior psychological position while playing with White!

But perhaps they should not be – trust yourself and with a bit of good luck, you would eventually be happy that they happened!

We also recommend reviewing the 7 Reasons Why Magnus Carlsen is World Champion.