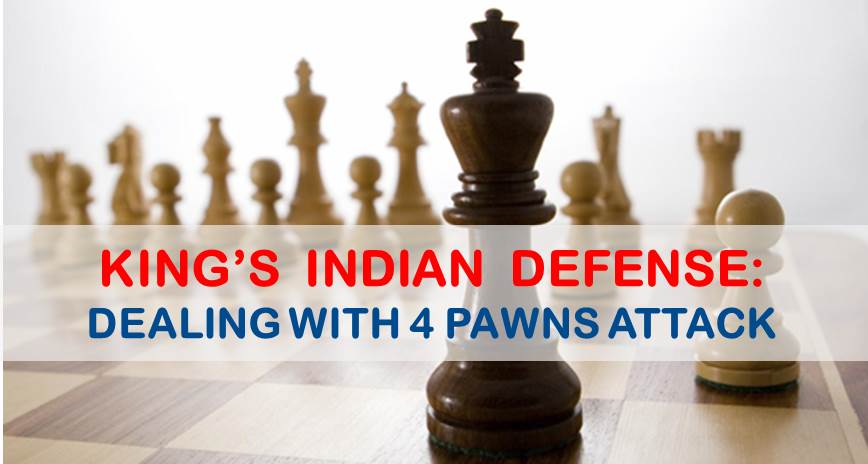 King’s Indian Defense: The four pawns attack is one of the most aggressive lines against the King’s Indian Defense. From a very early stage in the opening white grabs a considerable amount of space, hoping to put black in a crammed position. The drawback of this system is that sometimes white finds himself overextended and his mass of pawns in the center becomes a weakness rather than a strength.

Nevertheless, this variation is highly popular at all levels, from beginners to Grandmasters. Among the most notorious references for the white side, we have Viktor Moksalenko, who scored several victories with his own pet line in the Four Pawns 8.dxe6!? which will be discussed later.

In this article, we will have a look at how to deal with this variation from a black’s point of view. We suggest playing the mainline with c5 in Benoni Style, but let’s examine the exact move order:

This is our first stop in the variation. Now white is left with a choice between advancing and capturing on c5. The mainline is to play 7.d5, but 7.dxc5 should not be underestimated. White adopts a type of Maroczy position and black needs to be accurate to maintain the balance. The main response to 7.dxc5 is 7…Qa5, but we are going to suggest the trickier 7…Na6!? in order to spice things up a little bit. See the details of this move in the following game:

In the position above white has two big choices at his disposal. He can capture on e6, which is Moskalenko’s pet line we mentioned earlier, or he can play 8.Be2, which is considered to be mainline. In both lines, the character of the play is very sharp. We shall look at both moves separately, as they deserve close attention.

Larry Christiansen played this move against Garry Kasparov in 1982. Kasparov won that game convincingly, but deeper analysis demonstrated that not all of white’s options were exhausted. Grandmasters like Moskalenko or Turov took the line and started scoring very well with it. Black can take on e6 with the pawn or with the bishop.

The positions arising after 8…Bxe6 is uncomfortable for black. For example, at some point white will play f4-f5, forcing the bishop to go back to d7, followed by Bf4 or Bg5 with pressure on black’s position. Therefore, we prefer to recapture with the pawn 8…fxe6, keeping control over the important d5 square. White has a few attacking ideas here too, but it seems black has very good chances of counterplay. See the following game:

The position in the diagram above can be reached by the Benoni move order as well. Here black has a wide range of options; he can try 9…Re8, 9…Bg4, 9…Nbd7. These are the three most popular moves and the overall assessment is that they all lead to very unclear positions. The move we’d like to suggest is 9…Na6, in pure Benoni spirit.

We want to continue with Nc7-Nd7 and later a6-Rb8 and start our counterplay on the queenside. The move 9…Na6 has not been tried much in this particular position, although we can find transpositions after 10.0-0 Nc7. Of course, one of the main concerns black should have is the advance 10.e4-e5, but it seems that after the accurate response 10…Nd7! black is doing well. See more in our analysis here:

We have covered the three main branches of the Four Pawns Attack in the King’s Indian and we have proposed a dynamic and somewhat less played repertoire for black in order to avoid going through well-known paths of theory. We hope you enjoyed reading this article and feel free to leave any feedback.

Looking for more on King’s Indian Defense? Here are Surprising Your Opponents in This Opening and 7 Best Games on It.