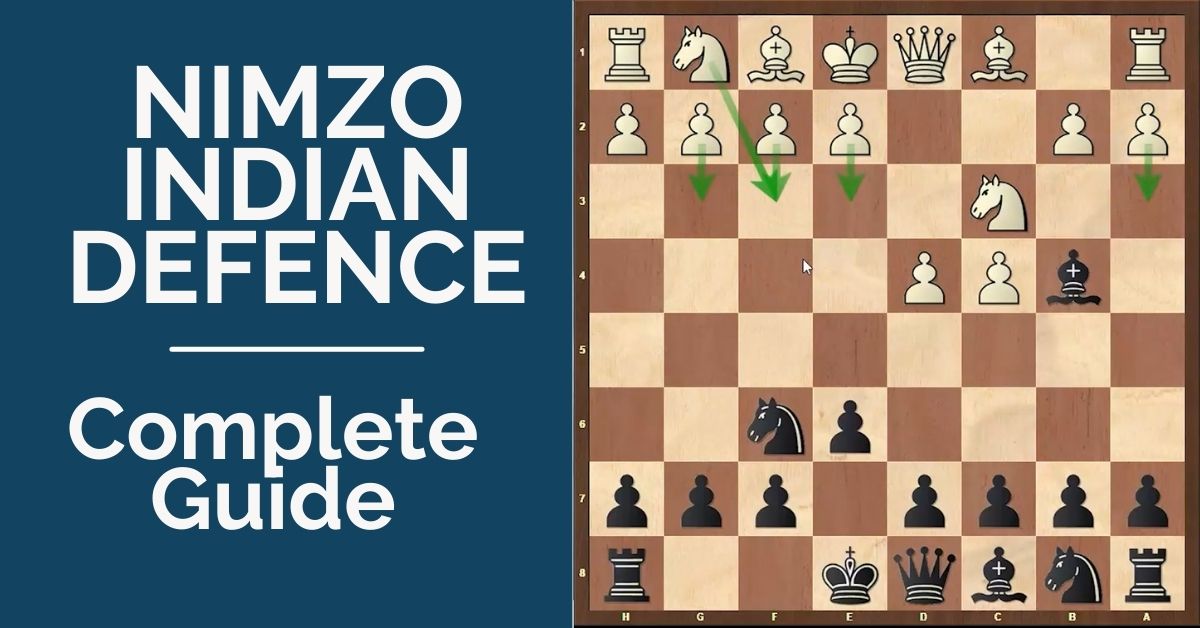 Nimzo-Indian Defence is probably one of the most common answers against 1.d4 nowadays.

The defense was introduced by Aaron Nimzowitsch, the founder of hypermodern chess. Black doesn’t occupy the centre with pawns right from the start and plays for quick development.

The center is controlled first by the pieces and only later on black will decide on the central pawn break. 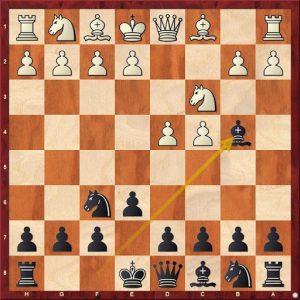 As mentioned before, black lacks pawn in the centre, but, as you can see, this doesn’t translate into a surrender of the centre. The second player is fighting for its control with the pieces and, with the last move, 3…Bb4, white’s e2-e4 idea has been stopped. This is one of the main ideas for white throughout the whole game and black shouldn’t allow it to happen in good conditions for white. As soon as white pushes this pawn or threatens to push it, black is usually ready to strike in the centre with d7-d5 or c7-c5.

By playing Bb4 black pins the white knight on c3 and is ready to give up his/her bishop pair in return for a better pawn structure. However, he/she shouldn’t hurry with this decision; black usually waits for a2-a3 to happen before taking this knight. Another important point is that this bishop won’t be traded for the knight anymore if white is not forced to take back with the b pawn.

The main plan for black here is to eventually strike in the centre by means of d7-d5 or c7-c5. The decision about the pawn break depends a lot on white’s response, but also on the type of positions that you prefer to play with black. Take a look at a few games with both ideas, see the plans and decide on your favorite.

And if you like both, why not have a second option in your repertoire?

Need a strong opening against 1.e4? I recommend reading this post on Sicilian Defence.

Advantages of the Nimzo-Indian Defense

The Nimzo-Indian Defence is highly popular at any level. It can be easily played at the highest level, by top Grandmasters and World Champions, as well as by amateurs or beginners.

So, what makes it so popular? There are a few reasons why so many players decide to include this defense in their repertoire:

Many players consider Nimzo-Indian Defence to be the best reply for black to 1.d4.

Black achieves solid positions in almost all lines. It is very difficult for white to obtain a big advantage or create messy positions in this opening if black doesn’t want it. The resulting positions are most of the times balanced, but still very rich, with fighting chances for both sides.

Since black is counting on a quick piece development to control the centre, the pawn structure has not yet been defined.

This will happen later and you can choose between different set-ups, depending on how white plays. Flexibility is a very important part of this defense and once you start studying it you’ll see that you can transpose to many well-known structures, like for example the Hedgehog. You can choose one main set-up, but you can always change plans in order to make your opponent uncomfortable.

The theory in the Nimzo-Indian Defence is well-developed, but the amount of lines you will have to learn is quite decent compared to other openings.

Moreover, the moves and ideas are most of the times logical and easy to understand, which makes them much easier to remember and reproduce over the board. There aren’t many sharp lines where you have to know everything by heart, so even if you don’t remember exactly the moves you have in your repertoire, the chances of something really bad happening to you are quite low.

Nimzo-Indian Defence is an opening that will help you improve your chess in general.

There is a lot of piece play and the fight for the initiative is always important. But there is also a lot of positional understanding involved – how to handle different pawn structures, which pieces to keep, what type of endgames to look for, and how to take advantage of the weaknesses in your opponent’s structure.

The classical games are a precious source of inspiration, as many of the plans used by ex-World champions can still be used today. So, as you can see, the Nimzo-Indian requires a lot of middlegame and endgame study, which can only help improve your chess. You don’t have to spend hours learning by heart-opening moves, you can learn a new opening and polish your overall chess understanding at the same time.

We also recommend reviewing the 5 Best Opening Systems for Club Players for Black.

Before mentioning the main options white has after black’s 3…Bb4, you have to know that white has other systems at his/her disposal on the second move.

One popular system nowadays is the London and white can still employ it against our move order: 1.d4-Nf6 2.Bf4. However, black has some interesting options here. One of the ideas that is worth taking a look at is 2…c5. The point is that after 3.e3 black continues with 3…Qb6, with interesting play.

Here too black has interesting options and if you don’t want to go into the main lines with 2…Ne4, 2…e6, 2…c6 and 2…d5 can all be investigated.  Kasparov occasionally has been playing this very solid line. There isn’t much theory to learn in either one of them, but the plans will slightly differ.

White tries to play actively and create an attack on the kingside, but here too black has ways to equalize. However, even though they are sidelines, you should study these early options for white, since finding a suitable answer over the board is rarely successful.

Now onto the Nimzo-Indian Defence theory.

After black’s 3…Bb4 white has a few set-ups. One of the main moves here is 4.Qc2, widely known as the Nimzo-Indian Defence Capablanca Variation.

This is a very natural move as it prevents one of black’s main ideas – doubling the pawns on the c file – and at the same time takes control over the square e4. Among the reference players of this line, you can find Grandmasters Dreev, Carlsen, and Kramnik.

Another main option is 4.e3, the Nimzo-Indian Defence: Rubinstein variation.

This is a classic set-up where white has the idea of developing the knight from g1 to e2 and then playing a3.

With this move, white wants to take immediate control over the centre by advancing e2-e4. It is a very aggressive move and has always had its fair share of popularity. One brilliant game in this line is Viswanathan Anand versus Wang Hao. Anand won a brilliant game against Wang Hao. But, possibly the most well-known expert on this line is Grandmaster Viktor Moskalenko.

There are many other moves that white can play, but the three mentioned above are the ones black needs to know most theory against. Against other moves, black’s development is usually quite logical and the amount of theory you’ll need to know is significantly less.

Want to learn more about this opening? Make sure to read Playing against the Nimzo. as well as 4.f3 System.