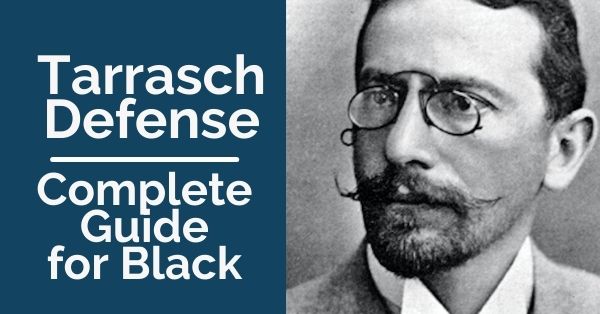 Tarrasch Defense is named after the German chess player, Doctor Siegbert Tarrasch, it is considered to be an ambitious, but sound opening.

1.d4 is generally considered as a solid option for white. The center remains closed for a longer time and we expect a long battle ahead. For active players, who prefer complications and are looking for a wild game, choosing the right answer as black is not an easy task.

Some of the black’s top choices for an imbalanced game are the King’s Indian Defense (although here, too, white has a few solid choices at their disposal) and the Grunfeld. In both cases, there is a big amount of theory to learn, as there are sharp lines where both players need to know exactly what they are doing or the game could go terribly wrong.

If white plays the Queen’s Gambit, another active option that black has is the Tarrasch Defense. Black fights for the center-right away with the move 3…c5 and forces white to make a decision. The most common move order for the Tarrasch is 1.d4-d5 2.c4-e6 3.Nc3-c5, but you can reach the same middlegames from other move orders as well: 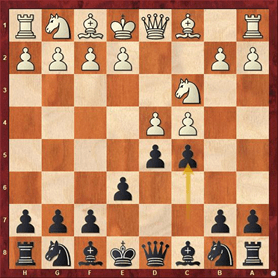 Generally, after the pawn trades in the center (the mainline goes 4.cxd5 exd5 and later dxc5 will be played), black will remain with an isolated Queen’s pawn on d5. At the very beginning of this opening, many players considered it to be bad precisely because of this. According to Steinitz, the isolated pawn represented a weakness, so masters of the time remained skeptical. Nowadays, we know that positions with an isolated pawn are double-edged. Although a weakness, the pawn offers plenty of activity and the game could end very quickly if white doesn’t know how to handle these positions.

Dr. Tarrasch understood this and believed that the mobility black obtains in this opening is more than enough to compensate for the isolated d pawn and achieve favorable positions. Getting into positions with an isolated pawn is usually up to white and whether dxc5 will be played. In any case, black has some interesting options and we will take a look at them in a moment.

As mentioned before, black is playing actively right from the start. It is an ambitious defense, where black is playing aggressively and willingly accepts an isolated pawn. In return, he gains space and freedom of development for all the pieces. In general, black’s light-squared bishop is known to be problematic in most of the Queen’s Gambit Declined lines. Here, however, this is not the case. And this is just one of the reasons why black’s pieces are more active compared to other approaches to the Queen’s Gambit.

Plans in positions with an isolated pawn.

Most of the time, black ends up with an isolated pawn on d5, so it makes sense to start here. First of all, why would black accept an isolated pawn? There are a number of advantages, with dynamic play being the main one. The pawn on d5 may become a target at some point, but by then it offers space, controls the central squares, and gives support for the black pieces. The disadvantage is, of course, that the isolated pawn is a long-term weakness and white will try to put pressure on it.

To know how to play these positions, it is important to know what each side wants. White will try to prove that the pawn is a weakness and finally win it. This is more difficult to achieve in the middlegame, where black’s pieces are controlling the center and creating threats. For this reason, white will try to:

Black’s plans depend on white’s set-up, but the main ones include:

The following game is a very good example of how to play actively and put pressure on your opponent. American Grandmaster Varuzhan Akobian is one of the specialists of this line and has played many good games in it. In this game you can see how he keeps white from realizing his idea (Nc5) and puts pressure on both flanks – the b and e files and kingside, by pushing h5-h4:

As we have seen, most of the time white will capture on c5 and play against an isolated pawn on d5. However, if white delays this capture, black has an extra plan – to close the center by advancing the c pawn. After this, black will usually follow up with b7-b5, gain space on the queenside, and eventually leave white in an uncomfortable, cramped position. White’s main reactions to this advance are b2-b3 and e2(e3)-e4, trying to weaken the c4 pawn. If black has good control over the center and the latter pawn break can’t be achieved, the threats on the queenside can be combined with threats on the kingside. In general, the dark-squared bishop will stay on d6, looking at the square h2.

Dr. Tarrasch himself has played a few good games with this idea, with the following being one of them:

Black can develop in a similar way against both of them, but the plans in the middlegame will differ. With the bishop on the f1-a6 diagonal, the play tends to be more dynamic, and black has more tactical ideas available. For example, the sacrifice on h2 is a common theme in these positions, and white needs to be extra careful when removing the knight from f3. The following game illustrates this clearly: 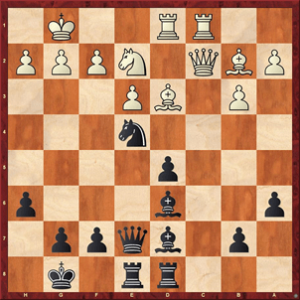 The game continued, of course, with 19…Bxh2 and black got a very strong attack:

With a bishop fianchettoed on g2, white’s position tends to be more solid, but here too black has interesting options. The pawn on d5 will not be so easy to attack, the knight will usually get installed on e4 and black should be fine. As GM Akobian demonstrates in the game above, black can sometimes have ideas of h5-h4, trying to create some weaknesses in white’s position.

All in all, the Tarrasch Defense is a viable defense to the Queen’s Gambit. Black obtains dynamic positions and can play for all three results. The amount of theory that black needs to learn is moderate, but it is important to know how to play with an isolated pawn and study many model games. Among the players who have used this opening successfully are former World Champions Boris Spassky and Garry Kasparov, American GM Varuzhan Akobian, and more recently GMs Daniil Dubov or Nodirbek Abdusattorov.

We also recommend reviewing this opening with GM Marian Petrov [TCW Academy] and The Opening Principles According to Dr. Siegbert.

Learn how to Win with Tarrasch Defense: