In his last article chessbibliophile offered a review of the site ChessPublishing.com:

From this month he would discuss selected opening updates from the site-Ed.

The gladiators fight unto death and even as the vanquished fall by the wayside and bite dust they are trampled by the horse hoofs of the victors. The roar in the amphitheatre reaches a crescendo. It’s chaos and frenzy out there. No, you are not watching Roman Games. You are in Tromsø, Norway watching World Cup 2013. I wonder if anyone can do justice to the agony and ecstasy of this spectacle. It’s terrifying.Any way I had to get back on an urgent mission: collecting TNs found in the arena by our friends from ChessPublishing.com.

Their first find is the demolition of an Anti-Sicilian system. If you are a practitioner of the regular Rossolimo (1. e4 c5 2. Nf3 Nc6 3. Bb5)* relax, it still remains intact. It’s the other line, 1.e4 c5 2.Nc3 Nc6 3. Bb5 that has taken a body blow. The game itself was played in dramatic circumstances. Alexie Shirov and Hou Yifan had already contested 5 games in the first round with Shirov leading by one point. So it was imperative for the talented Chinese player to beat Shirov to even the score. As it turned out, it was he who was better prepared and David Smerdon’s analysis shows why. In examining the game I have also consulted the ebook on this variation released by ChessPublishing.com.

A well-played game by Shirov. It appears that White has problems after 3…Nd4 followed by …g6, …Bg7 and…Nh6.

Among other updates I found Glenn Flear’s examination of the Grünfeld games from the World Cup interesting.

Both encounters (El Gindy-Dominguez and Sambuev-Morozevich) are fluctuating struggles, with the player possessing better nerves winning in the end. In the second game White chose to place his bishops on c4 and e3 and then tried to prise open Black’s kingside with h4. An ambitious strategy.

White did miss an improvement in the following position: 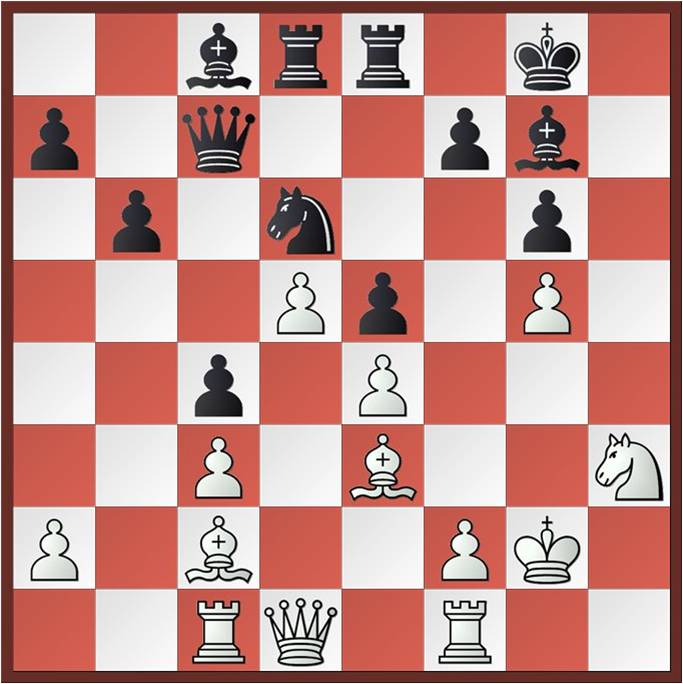 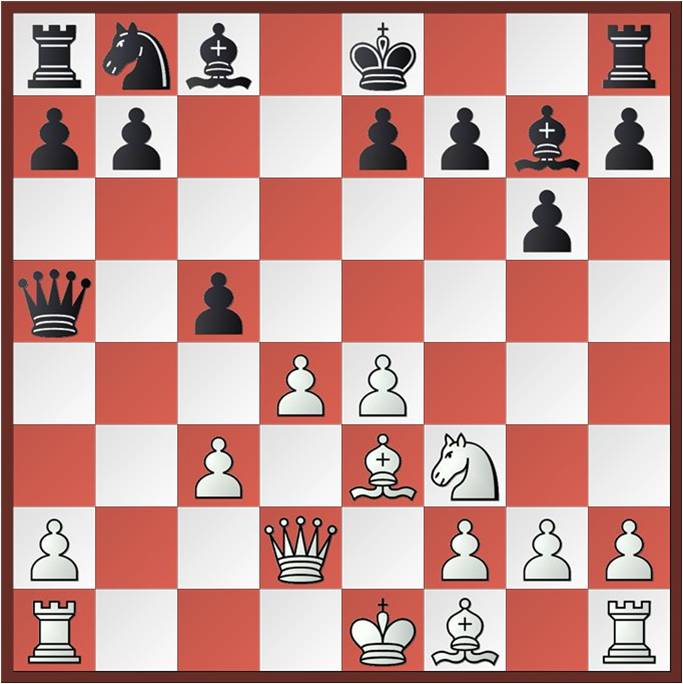 White has a nagging edge as shown by the game Kramnik-Svidler, London, Candidates, 2013. Glenn Flear had done a commendable job of analysis on this line: (After 9…Nc6 10.Rc1 cxd4 11.cxd4 Qxd2, Kramnik produced a remarkable TN with 12.Kxd2. 1-0, 40 moves). One game that I have been planning to show is a King’s Indian from an earlier update. Experienced readers are quite familiar with this encounter from the European Individual Championship. The battle was fought between the experienced Swiss GM Yannick Pelletier and the relatively unknown Danish IM Andreas Hagen. So what is new? It’s Vigorito’s treatment of the opening and the middlegame. I have simplified his notes a bit for the uninitiated player and added explanation wherever necessary (marked CB).

A dramatic victory. But as the game shows, Black has serious problems with 9….Ne8 in this system. The defence of d6 continues to be a worry after White’s pawn exchange on the 15th move. Consequently he is not able to prevent White making inroads on the queenside with a5 and N-b6. In his notes Vigorito hints that Black may have to give up 9…Ne8 line in favour of other lines like 9…a5. One line that he does not mention in the game commentary is 9…c5 with which Fischer beat Korchnoi and Larsen. It does figure in the ebook released by ChessPublishing.com. Perhaps the line deserves a fresh look.

There is much else to see and explore on this site. The fact that it is a pay site should not deter you from checking out the free areas. If you read the observations by commentators you can make a shrewd guess of what is going on in theory. Also check out the Pub area that may have discussion of your favorite lines. See you next month!