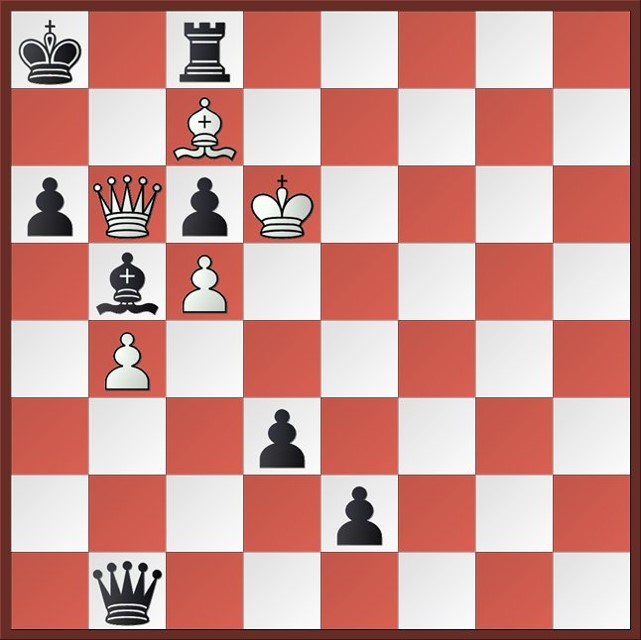 “I can’t see you saving this game,” said the player with Black. “I’m a rook up already,

and I’m going to get a second queen for good measure.”

“You’re celebrating your victory too soon,” came the unexpected retort. “I’m the one who’s going to save the game, and you definitely won’t manage to.”

*The example given here is taken from Soviet Chess Primer by Ilya Maizelis soon to be published in English.

When our columnist saw the position he assumed that it arose in a game over the board.

Now it turns out that it is a composition. The author was a German chess master and happened to be the brother of Dr. Emanuel Lasker, Second World Champion-Ed.

1. Pawn is one square too many away from queening
2. Pass pawns blocks it’s own queen making it a tempo down
3. Black’s king safety visually looks unappealing, even though his rook and bishop controlls the queen “somewhat”
4. Black’s bishop is almost tall pawn.

Basically black’s pieces are positioned horribly and the black king is feeling a bit cold.

Saying all that, I still never found that decisive win. My idea was 1. Kd7 attacking the rook. I even came to the conclusion that it was the only candidate move. After 1. Kd7 if the rook moves to safety, then 2. Bd8, e1=Q 3. Kc8 and I saw black giving checks like crazy (draw). If after 1. Kd7, e1=Q; Then 2. Kxc8 and again I saw black checking like crazy because if

As mentioned in the article, this problem was taken from a famous Russian book, The Soviet Chess Primer.
The English edition has been published:
http://www.qualitychess.co.uk/products/2/231/the_soviet_chess_primer_by_ilya_maizelis/

There is no win for white

Bishop b8. Took takes bishop. Kc7.RxB6. Cxb6. There is no way to avoid checkmate

Dear Alfred,
Some times the “Impossible” is possible in chess.

Dear Denisse cortez,
Could you give your moves in standard notation?