Our columnist offers review of a recent issue-Ed. 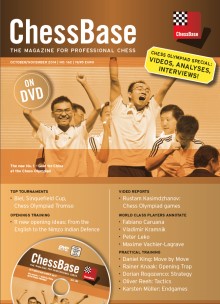 A chess Olympiad is an occasion for celebration. It’s an event in which all chess players participate as members of one fraternity. Cultures mingle even as players drink to each other’s health. Battles do rage with fierce national pride. But no one forgets the precious motto, “gens una sumus”. This issue of ChessBase Magazine carries all the games from this event, a number of which are deeply annotated.

That brings me to the sporting results. With the victory of the Chinese at the Chess Olympiad a new era has begun. For once the domination of former USSR states, Russia, Armenia and Ukraine has come to an end. How did this miracle happen? There are no easy answers to the question. One needs to take a close look at the critical encounters and see how the Chinese team passed the test. This issue of ChessBase Magazine offers ample evidence that the Chinese are a force to reckon with.

They had their baptism of fire as early as the fourth round when they met the Russians. 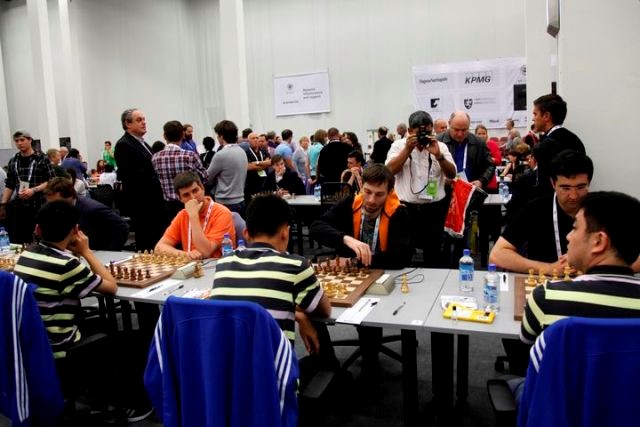 The top board encounter between Vladimir Kramnik and Wang Yue is annotated by GM Sumets in this issue. I have simplified it a bit for younger readers and also added a little explanation wherever necessary.

A dramatic game in which Kramnik overreached himself and came close to losing. However, his opponent deserves full credit for his resourceful play. As Sumets shows, he would have even won with more precise play in the ending. But what about Kramnik? Days after this game Vlad was asked why he chose to make a speculative sacrifice when he had such an overwhelming position. Had he not seen 19. b5? Vlad replied, he did consider 19.b5, but did not find a clear win. Then he saw his team mate Sasha Grischuk in real danger of losing on the second board. So he took a risk and sacrificed the knight on f7. Meanwhile Sasha managed to recover his spirits and save the game. There were hard-fought draws on the remaining boards as well and the final score between Russia and China read 4-4. From this point the Chinese went from strength to strength. It speaks for the strength of their performance that they lost just one out of 44 games they played.

The Hungarians claimed silver with a fine farewell performance by Judit Polgar (+4 =1-1). The Indian team’s win of the bronze medal won a wave of applause back home. But there were dissenting voices abroad. In the tournament report Jonathan Tisdall wrote:

The fact that the only Top 10 seeded team that India encountered were 4th seeds Armenia (a 2-2 draw) may provide ammunition for critics of the tiebreak and pairing system.

In fairness there would be occasion for the Indians as well as others to prove their mettle in future. Every one needs a level playing field.

As for the Russians, one can only feel sorry for their failure (they came 4th-Ed.) In my view every team facing the Russians plays with extra motivation. That itself is a mark of respect for a great chess nation. One consolation was the victory of the women’s team that claimed gold ahead of China (!) and Ukraine.

If you are an ambitious player hoping to represent your country in Olympiad, this issue is all the more for you. You get to know how other teams play and also what to do when you meet big players in the arena.

At the individual level the great event was the 2nd Sinquefield Tournament won by Fabiano Caruana with a superlative score of 8.5/10 ahead of Carlsen, Topalov and Aronian. 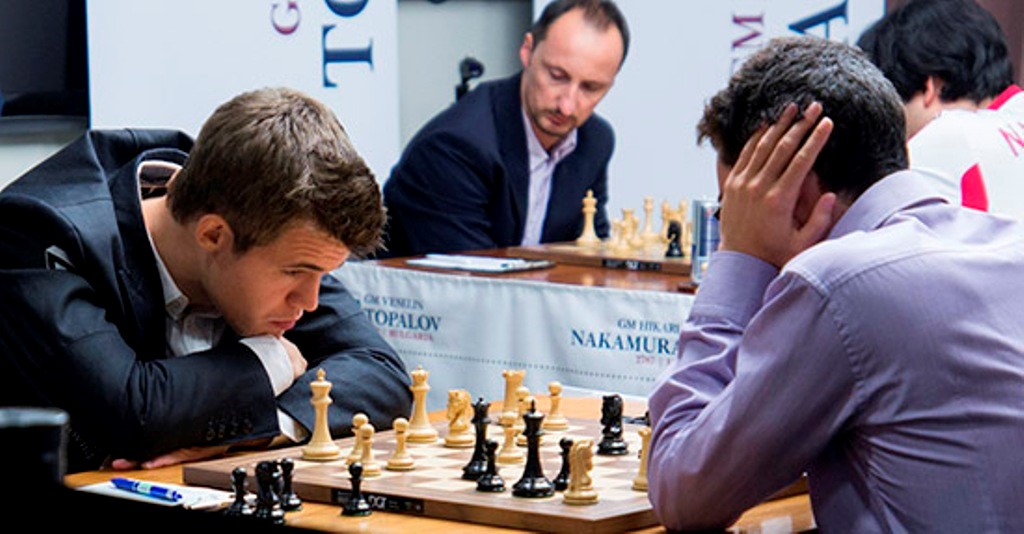 In their individual encounter Caruana beat Magnus and the game is well-annotated by GM Postny in this issue. I may add only two additional points of interest. 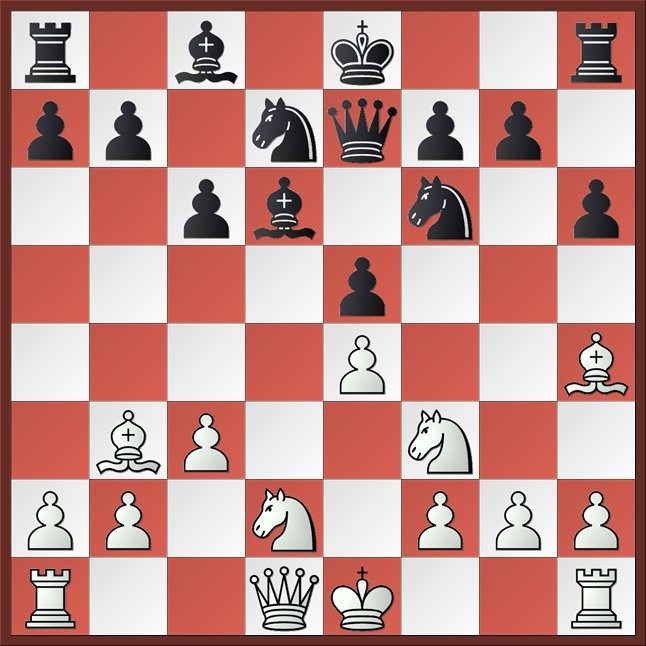 In the position here Carlsen played 11.Bg3?, leaving everyone bewildered. Why unpin the knight and retreat the bishop, losing a tempo? There is an answer to this question. Carlsen probably expected 11…0-0? and there would follow 12.Nh4 threatening both Nf5 and Ng6.Black’s only move would be the abject 12…Qd8.Note that 11…Nh5 is less effective here as White also has the answer 12. Nc4. After Caruana’s move 11…Bc7, 12. Nh4 is no longer feasible as Black has 12…Nc5 13.Bc2 g6. Carlsen still believed, he could lay siege to Black’s e-pawn. So Caruana’s move 13… Nh5 was a surprise as he didn’t expect the knight to move to a square where it would be apparently en prise.

In the second position here White’s knight on h8 is doomed. But the greater cause for concern is the move…Bb6+. 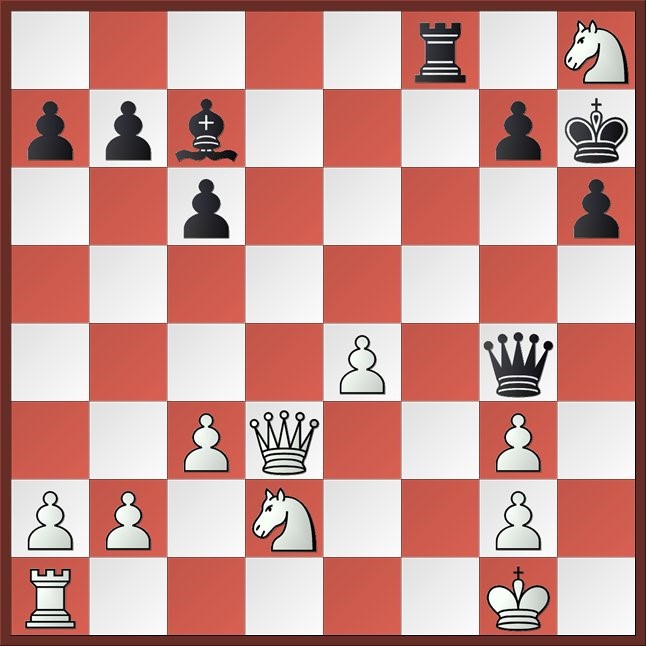 Carlsen was disappointed by the result of this game and wrote in his blog:

With white against Caruana I made several mistakes in the opening, and by the time I understood I was worse I was already in trouble. When he allowed the interesting bishop sacrifice on f7 I felt the game could go either way. Despite the ensuing complications, he played the rest of the game very accurately. Having missed his great Nd3 resource I ended up a pawn down without much hope of salvation, when I even blundered horribly just before the time control losing immediately.

This issue of ChessBase Magazine also reports on Dortmund Tournament that Caruana won (5.5/7) ahead of Peter Leko and Georg Meier. The winner also annotates his game with Ponomariov:

This brings me to other sections of this issue. There are as many as 11 opening surveys ranging from Najdorf Sicilian to Nimzo-Indian. Among them I shall pick the one on Four Knights Game, Rubinstein Variation (C48). Here the author, Dennis Breder comes up with an important TN. 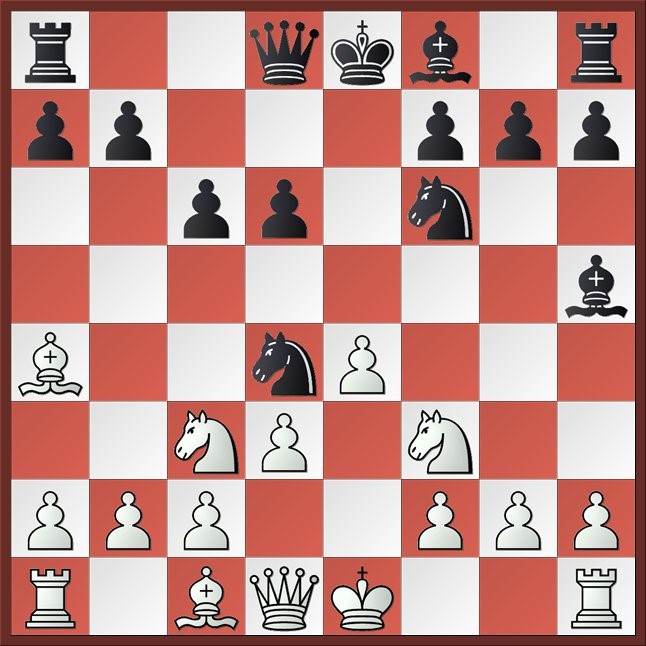 Here is a bird’s eye view of the whole line and again I have kept it simple for younger readers to follow.

This time I did not see the trade mark feature, Telechess Section with CC games. Hopefully, commentators, Robert Alvarez and Juan Morgado would be back in the next issue.

Courtesy: The image of China-Russia Match at Trømso Olympiad 2014 is taken from ChessPro.ru

For more info. on this issue, see the publisher’s site.