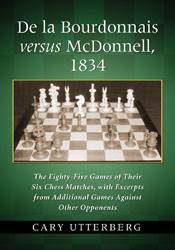 Why did de la Bourdonnais win? He was a professional with greater knowledge and experience. McDonnell, his opponent was a gifted amateur who had not encountered first class opposition the way the Frenchman did. Otherwise he was as good his opponent in terms of talent.

The match had a positive and indeed beneficial effect on the chess world, especially, France and Britain. The number of players visiting chess clubs dramatically rose. More and more players began to follow and study the game. New stars appeared on the horizon In 1843 an historic match was played between Howard Staunton and Saint-Amant. This keenly contested match was won by Staunton (+11, =4, -6). 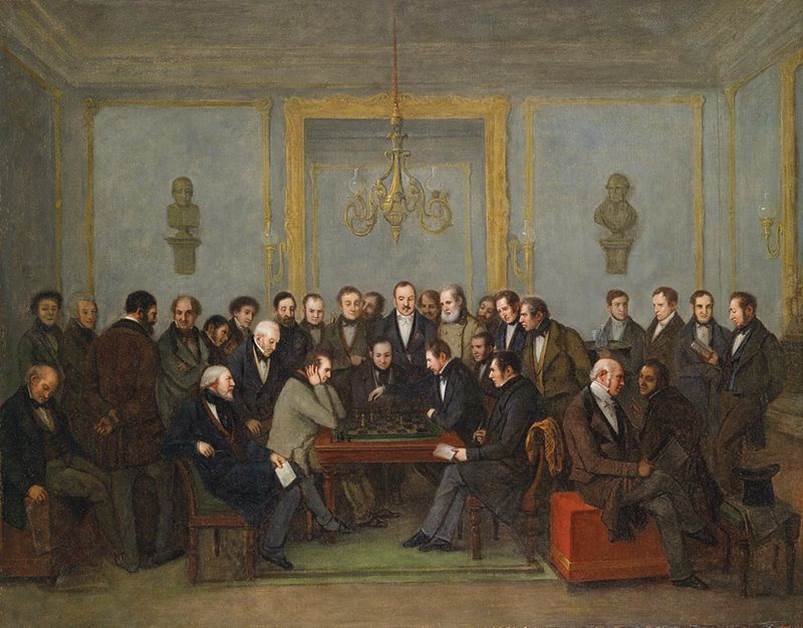 For our heroes, it brought glory and fame. Sadly, McDonnell did not enjoy it for long. A year after the match, he fell prey to a kidney disease and passed away in a boarding house that had been his home for years. He was only 37. 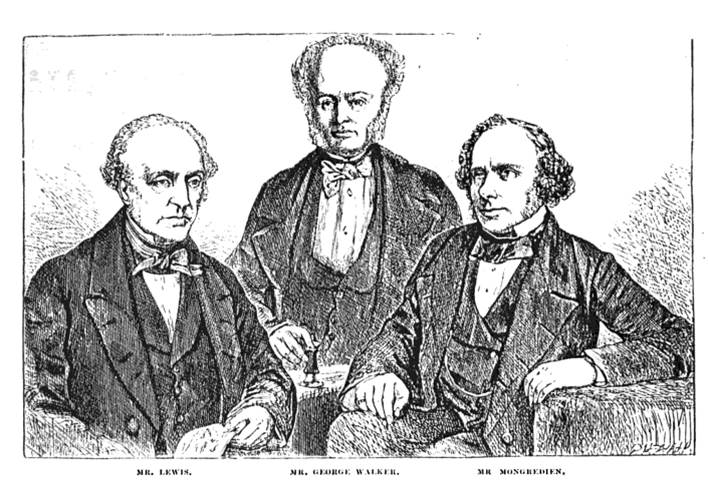 *George Walker, patron and friend arranged to have him buried in London’s Kensal Green Cemetery.

In contrast future appeared rosy for de la Bourdonnais. He was appointed secretary of Paris Chess Club and it earned him an income of 1200 francs. His chess book, New Treatise continued to remain in print and was translated into Russian. Buoyed by his success he also started a periodical, Le Palamède, the first chess magazine in the world. 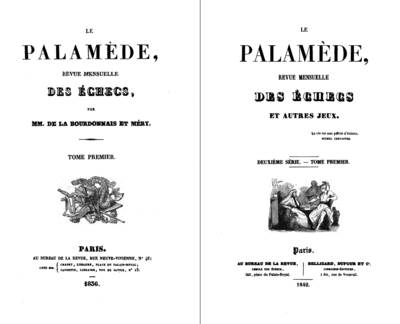 In 1838 he became ill, first with a stroke, later with dropsy. …The following year the Paris Chess Club was disbanded and his secretary’s salary (1200 franks) ceased abruptly. Unable to play regularly on account of his illness, he could no longer earn a living and bit by bit he sold his books, his furniture and even his clothes. An offer of employment at Simpson’s Divan brought him to London in November 1840.Watched by large crowds he played in public for two days, conceding pawn and two moves at half crown a game. Then his illness became too severe. Walker, finding Bourdonnais and his wife living in a garret, facing both eviction and starvation, raised a fund, moved them to more comfortable premises, and provided medical aid, but within three weeks he was dead.

He was only 45 when he breathed his last. George Walker arranged to have him buried in the same Kensal Green Cemetery, near the grave of his old rival McDonnell.

This brings me to one great innovation of the match that had a revolutionary impact on the game. Before 1834 games were sporadically recorded. Now for the first time a score sheet was kept and history was made. The player whose selfless labours brought about this transformation was William Greenwood Walker, the aged Secretary of the Westminster Chess Club. He was a dedicated fan of McDonnell and throughout the whole 85 games this old gentleman sat beside the English Champion “with spectacles on nose” eagerly taking down the moves and “scarce daring to breathe lest the conceptions of his hero should miscarry”.

Two years later he brought out a book, A Selection of Games at Chess Actually Played in London by the Late Alexander McDonnell and it included scores of all the games of the 1834 event that he had so painstakingly written down day after day of the match. Here is a facsimile of the title page: 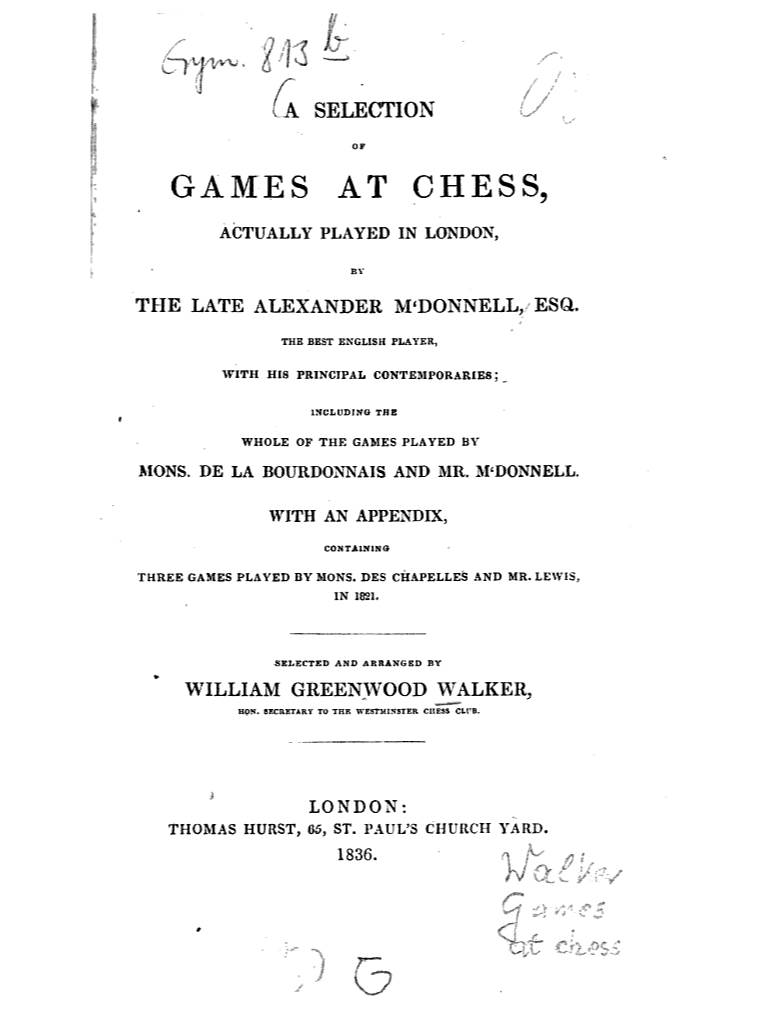 Now for the match. There is a way of enjoying and learning from these games. First, see them without annotations and study them on your own. Then take a look at the commentary in this book and compare it with your notes. You would know what you have missed. On occasion you might even discover a line that the author has missed. That’s a bonus.

(For our readers, we are making all the games of the Match available here-Ed.)

Then take a look at the commentary in this book and compare with your own notes.

You would know what you have missed. On occasion you might even discover a line that the author has missed. That’s a bonus.

In this review I have taken just two games and for reasons of space only the first of them carries annotations. The author’s own notes are lucid and to the point. However, I have added a little more explanation or offered a comment when I have differed with the author.

A fighting game in which the loser deserves as much credit as the winner. 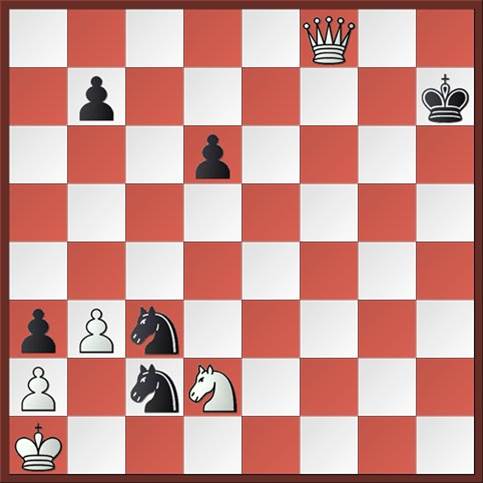 The next game is a tour de force in which the Frenchman shone. 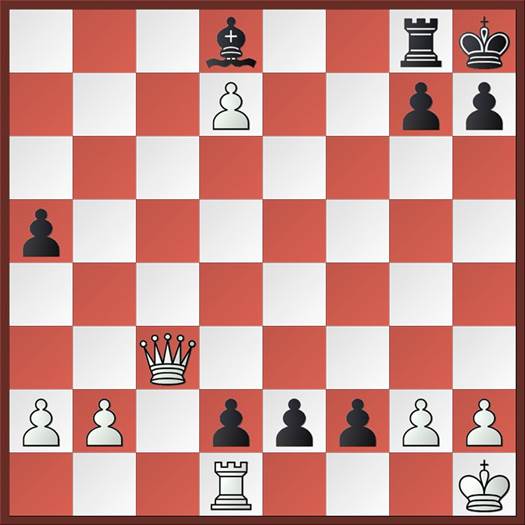 I have only one minor point of criticism about the book. It could have included more biographical detail instead of statistical analysis that is rather excessive.

The author has not permitted himself the liberty of computer-checking and it allows some human error in analysis. But that is for the reader to find out. Otherwise this is a first class work of research and scholarship on a great match.
Every chess player can benefit from making a careful study of the games and annotations.

*Note: George Walker (not to be confused with William Greenwood Walker) was a founder-member of Westminster Chess Club. He organized the 1834 Match at the Club. His books and writings did much to enhance popular interest in the game.

His work, Chess & Chess Players is not to be missed.

As we mentioned before, it offers pen portraits of Deshcapelles, de la Bourdonnais and Alexander McDonnell. It also gives a fascinating eyewitness account of the match:

Taylor Kingston offers another perspective in his article.