So goes the Russian proverb.

Our columnist reviews a recent book on the wizard of Riga-Ed. 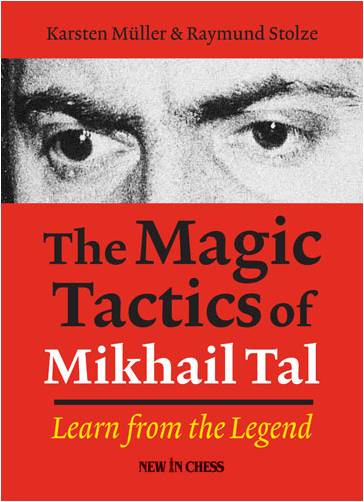 The Magic Tactics of Mikhail Tal: Learn from the Legend

by Karsten Müller and Raymund Stolze

28th May, 1992. The traditional Moscow Blitz tournament is in full swing. The field is led by World Champion Kasparov himself who has beaten one opponent after another. But this time there is a kind of electricity in the air. Seated opposite him is a pale emaciated figure who appears to be a shadow of himself. 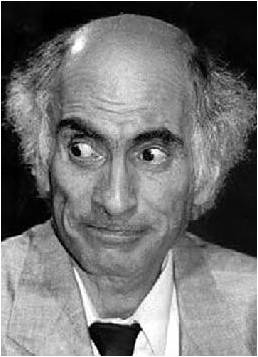 It’s only the burning eyes that offer a glimpse of the flame within. For it’s none other than Mikhail Tal, former world champion…the Paganini of chess as he was calledin histime. The crowd watches with bated breath. Few are aware that the Latvian genius is critically ill and nearer death’s door than ever before. In fact he has sneaked out of the hospital to participate in hisfavourite tournament. The play begins and Kasparov is soon treated to a Hussar-like cavalry charge. It appears that the World Champion is going to be mated. The alert Garry beats off the dashing attack, retaining the extra material…. only to overstep the time limit! A stunned Kasparov extends his hand in resignation. Pandemonium breaks out in the hall….. That game was to be Tal’s swansong.

A month later, on 28th June 1992 he breathed his last in a Moscow hospital and was buried in his native Riga, the city that he loved. The maestro is gone, the magic still lingers. How time flies! Decades ago the world had seen a different Tal. 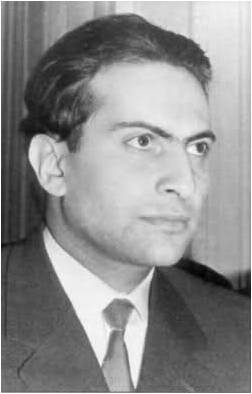 It wasthis youthful, dashing figure that had capturedthe imagination of chess fans with his brilliant play.The ebullient, charismaticgrandmasterwasthe darling of the public. 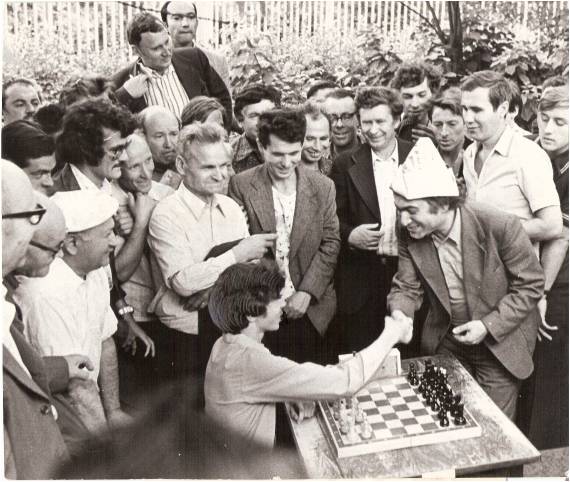 His life is the stuff of legend and there are many wonderful stories about him. This has its flip side though. Mindless admiration for Tal has also resulted in poor understanding of his play, especially, his combinations and sacrifices. Tal himself famously said, “There are two kinds of sacrifices: correct ones and mine.” Now that makes it difficult for an average reader to find out where things went wrong for Tal’s opponent and how he should have played.

The present book is welcome as it explains Tal’s tactics as humanly as possible.

Some of his play has remained bewilderingly complex and even computers have not been able to do them justice. A case in point is his game against Dieter Keller (Zürich 1959). (Download pgn) 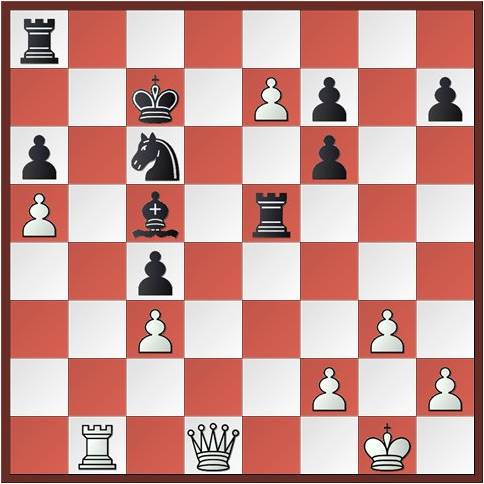 In this book GM Hübner devotes 44 pages (!) to the analysis of the game and writes, “The discussion of this game could fill a whole book. Here we had to limit ourselves to a few modest suggestions.”

Now my mention of this “monster analysis” is not intended to frighten the would-be reader. Indeed, it is most helpful when you analyse the game on your own and then try to find out how either side should have played.

Otherwise the authors have made life easy with their organization of material in the book. The first two chapters deal with correct sacrifices and the next two chapters with speculative sacrifices. This is particularly useful for Tal fans for their idol left a legacy of mysteries with his combinations. In all there are 55 complete games and 86 positions. At the end of each chapter there are do-it-yourself exercises.

Yet one cannot help feeling that the selection of games would have been better. The more well-known examples do bring a sense of déjà vu.

It should also be noted that the resistance of opponents as a whole is seen to be lower against Tal in this book. That makes the work rather one-sided.

In reality some of his contemporaries, Keres, Bronstein and Nezhmetdinov were no less known for their tactical wizardy. Tal, himself, a connoisseur of combinations had the highest regard for their play. When he was asked in an interview what was the happiest moment in his life he said it was his game with Nezhmetdinov, Baku ’61.

He fell prey to some magic display by the wizard of Kazan. (Download pgn)

To return to the book, the focus here is on tactics in the middlegame. The endgame is seldom touched. Most of his victims did not survive to see the endgame anyway

The following position is an exception, though. 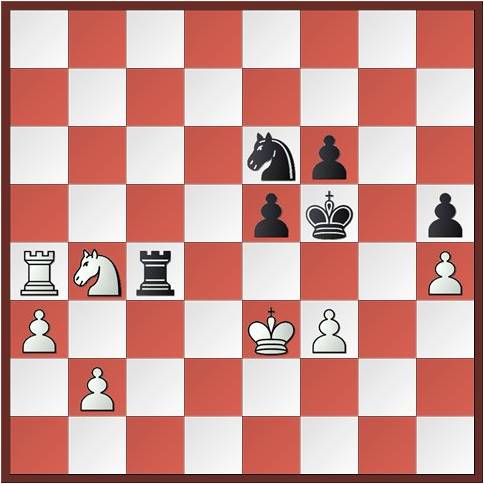 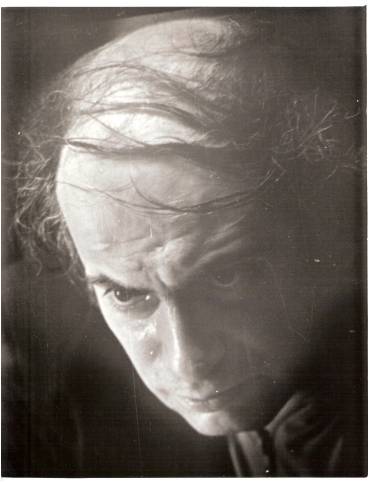 Tal’s magic was also seen in his draws. This book misses several of them, especially, his games with Fischer (Download pgn). 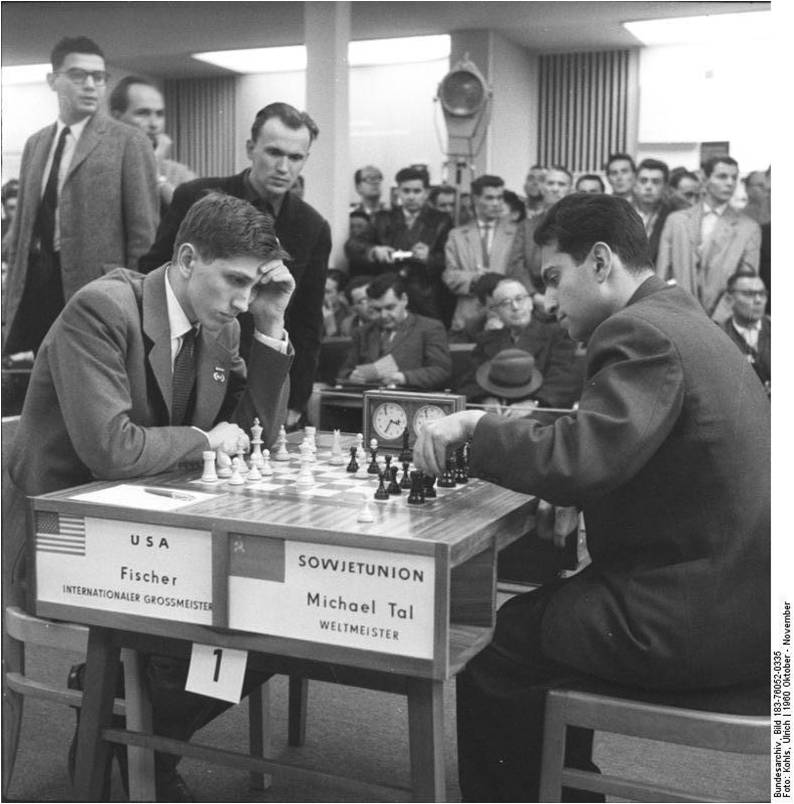 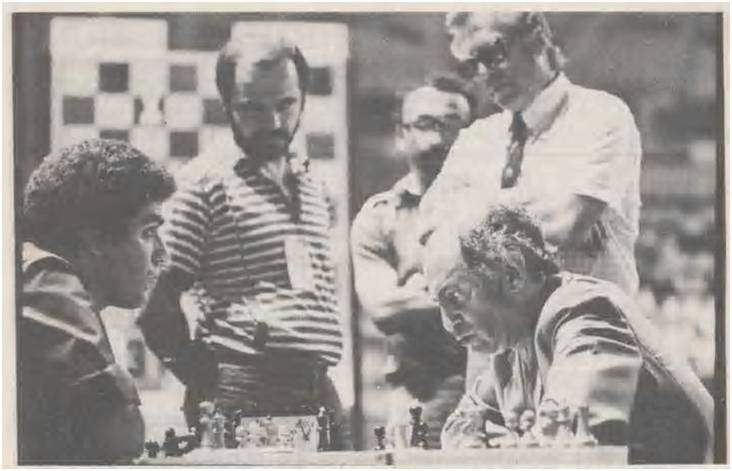 (It may be seen here)

The book has four chapters interspersed with reminiscences of Tal by others. Strictly speaking, they do not belong to a book on tactics. Angelina, Tal’s widow has her rightful place in a biography, not here. Other tributes are a mixed bag. Some can be accepted on account of their first hand experience and insight. But not the interview with Alexander Bakh, a chess official and a good friend of Karpov. He waxes eloquent on how Karpov valued Tal’s objective analysis of positions and admired his judgement. He also mentions how Tal contributed considerably to Karpov’s winning the world championship matches with Korchnoi in 1978 and 1981.

Tal was Karpov’s official second and worked with him in that capacity. So surely he must have earned Karpov’s gratitude, not at all. There is no mention of Tal in Karpov’s account of the world championship matches in his autobiography, Karpov on Karpov or any of his writings. It is also absurd to speak of objectivity in Tal’s analysis. That was highly subjective, replete with imaginative fantasy. Karpov and Tal were as different as chalk and cheese. Karpov was (and still is!) a cold character and Tal, a warm personality. They had nothing in common. So why did Tal assist Karpov? 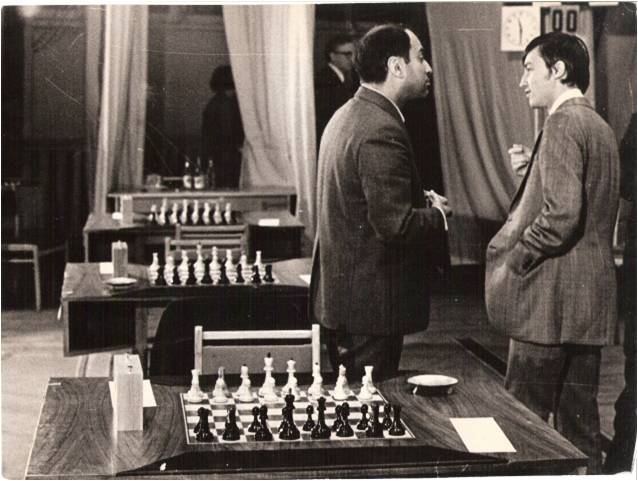 It was Angelina who revealed what happened. The authorities gave her husband an ultimatum, “You help Karpov. Otherwise we won’t allow you to travel abroad. We’ll take away your stipend, your chess tours…everything.”

Bakh’s version of the Karpov-Tal relationship is also contradicted by Helmut Pfleger in this book. After the Merano Match (1981) Tal shared his views on the German television and Karpov flew into a rage as he thought Tal had let out his secrets. He denounced him as a “traitor”.

So much for “what Kapov valued in Tal”!

It is surprising that the authors accepted Bakh’s version of Karpov-Tal partnership at face value and did not bother to ask him some serious questions.

That brings me to the editing of this book. There are a couple of inexplicable slips and the customary attention to detail is lacking. The name of Koblenz, Tal’s trainer is misspelt throughout. The article, Reflections on Mikhail T. written by the authors appears under the name of Botvinnik. The Patriarch would not have approved.

Notwithstanding these errors of omission and commission the book is an important addition to existing literature on Tal. It is hoped that New in Chess House would come up with a definitive edition of Tal’s games and also a proper biography. The wizard of Riga deserves no less….

As he himself wrote in a tribute to late Nezhmetdinov:

Players die, tournaments are forgotten, but the works of great artists are left behind them to live on forever.

Thanks Art, as always!

Others are from public domain.

Dear reader,
I am afraid we cannot offer the book online.
By the way there is a better series on Tal
“Mikhail Tal’s Best Games” published by Quality Chess. Currently the first volume has been released. You can try it.

There was little wrong with the Tal Tactics book by New In Chess, and I ran a number of interesting Tal positions from it in my Sunday column. These were very challenging tactics, and, well worth buying this volume. Reach me at LinkedIn.com.

Dear chess friend,
The limitations of the book are pointed out in the review itself.

i`m from south america, i would love to read ir!!!!!
please put it online!
for Tal`s memory!

Outѕtanding quest there. What occurred after?
Thanks!

13th April, 2014
More by way of post script:
I have seen a preview of a forthcoming title on Tal.
http://www.qualitychess.co.uk/products/2/224/mikhail_tal
It promises to be better than this book.
Also, this work focuses on the tactics of one player.
Perhaps a more comprehensive treatise on tactics may be better.

Dear reader,
The book is an informal primer on tactics based on the games of Tal.
If you look at the Note right above these Comments you will find a link that takes you to the publisher’s site.
You can download sample pages of the book there and see if it is suitable for your needs.
After that if your question still remains unanswered, check this review again and you will know.
Mean while for your enjoyment I shall append links to two videos:

Is it a good book (magazine?) for upcoming players? Please let me know!