One of a series of six events over a two year period. Round one of the Khanty-Mansiysk Grand Prix event started with a bang. White won 5 of the 6 games played.The only board where white did not win was in the game of Kosteniuk and Stefanova. Kosteniuk came from a large disadvantage to get the draw.

The game was interesting early on as by the 5th move the game seemed to steer in to previously uncharted waters. Black already dominated the white squares and white the dark squares. On the 11th move White calmly moves her queen back to g2 to continue to build the king side attack as opposed to taking the e pawn which would have given black some opportunity to develop.

On move 17 black’s queen took on a2 while Nxf4 was probably preferable and would leave the position more even. Now after Nc3 White really has no major difficulties.

Move 18 black place Qa1 check, white has two options Kd2 or Nb1. White went for Kd2 which appears better because if Qxb2 white can play Rb1 allowing white to take the b7 pawn and now would have a very nice attack. Move 19 black plays Qa5 and now b4 for white leads to similar ideas as Qxb2 except if black does not take now the knight has been freed. Move 23 allowed black back into things by moving the Ra1 and appearing to attack the a7 pawn neglecting the threat of e5. Rh1 seems to be an improvement in the position. 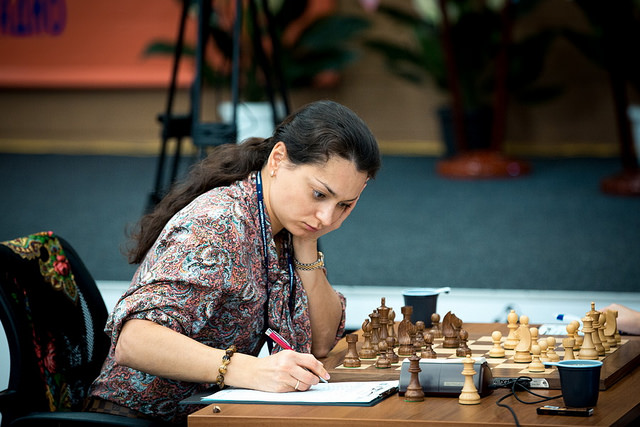 Kosteniuk of course saw e5 and played it improving her position. In the end of the exchanges white is left with a slightly better pawn structure and a more active king but a much less active Bishop. On move 38 Kosteniuk blunders by playing Be7.

This allows Ne2 with the idea of moving to Nd5 check and if Black attacks the queen side of white to get counter play the knight take on c6 also attacks the Bishop unlike if Bf8 was played.

From this point on White continued to build a strong advantage until move 58 where she queens the f pawn instead of pushing the g pawn or other moves that would strengthen her position.

Now Nd5 allows the f pawn to be taken by the Bishop followed by blacks king attacking the g-pawn. The game essentially ends on move 62 when black takes the g-pawn and now it is knight and bishop vs. knight.

The Hou – Kosintseva game started with the mayor making the first move for Hou: c4. The game stayed with normal lines until move 10 where Kosintseva played Nb6. 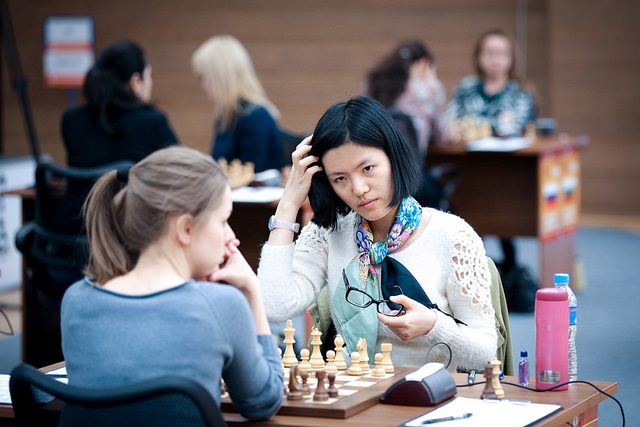 The game continued on with Hou winning the better of several exchanges and going up a pawn which happened to be a passed pawn on the d-file. By move 49 white had three passed pawns on the king side and black had one pawn left on the a file which white controlled the key squares and easily won the game. 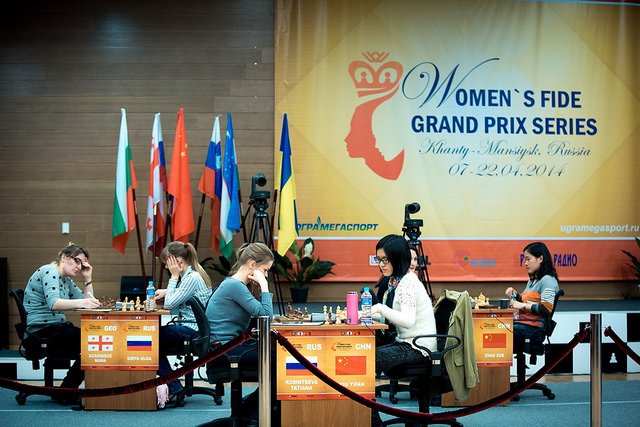 In the other games Anna Usenina of Ukraine won as white against Natina Muminova of Uzbekistan, Xeu Zhao of China defeated Katerina Lagno of Ukraine, Olga Girya of Russia defeated Nana Dzganidze of Georgia, Ana Muzychuk of Slovenia defeated Batchimeg Tuvshigtugs of Mongolia.

Round one featured some great fighting chess. Hopefully the tournament continue with the same spirit of adventure and fight. Maybe black can even win a game