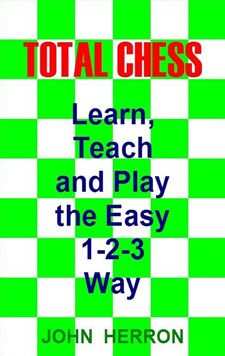 We are very excited to announce that TheChessWorld.com starts to publish series of chess article written by an innovative chess instructor John Herron for TOTAL CHESS: Learn, Teach and Play the Easy 1-2-3 Way. We believe that many of our readers would greatly benefit from the information presented in these lectures, thanks to the John Herron’s ability to explain complex concepts in simple words.

Important chess concepts such as chess tournaments, chess variants, sportsmanship, piece strategy, pawn advances, exchanges and many more will be covered throughout the course of lectures.

There are three general phases to a chess game. It is not always clear when one phase ends and another begins, but it is a good way to organize your thoughts and lessons.

2) Midgame: The midgamebegins when the opening is done and lasts until the endgame. The midgame is the most complicated and difficult part of a chess game. There are lots of pieces and lots of possibilities. Both players attack, defend and use tactics. Many games end in the midgame with checkmate.

3) Endgame: The endgame begins when there are very few pieces left on the board, or when the queens are traded. Although there are not many pieces on the board, there is often a lot of strategy. You must make good use of the pieces you have. Subtle moves can make the difference between winning, losing and drawing.

There are many playing levels in chess. One way to determine your playing level is to see what you thinkabout when you play.

3) Advanced Players: Advanced players look at the space around the pieces. They think about where the pieces can go and what the pieces can do, even if it takes more than one or two moves. They look deeper and see more possibilities. They usually think ahead three or more moves.

This is indeed an encyclopedic book–if I could only have one book on chess, it would be Total Chess. Thank you for contributing Mr. Herron.

Some more useful information is coming! 😉