It is easier to checkmate with two rooksthan with one rook.

Therefore, this endgame is harder than the king and two rooks versus king endgame. However, if you follow the three steps for this endgame, you will always be able to get checkmate.

1) Align the kings one row apart: As in the king and queen versus king endgame, you must use your king and rook working together to get checkmate. You start by approaching with your king, but you must also align, or line-up, your king with the opponent’s king, one row apart from each other. This is called putting the kings in opposition. The kings must be aligned one row apart, in opposition, before you can make progress.

2) Force the king back with your rook: Once the kings are in opposition, aligned one row apart, use your rook to put the king in check. This will force the king back, toward the edge of the board. The king will not be able to escape toward the center, because your king and rook will attack all of those squares. The king must retreat. Continue doing this, one row at a time, until the opponent’s king is forced to the edge of the board.

3) Remember to waste a move: There is a special maneuver you must use in this endgame to align the kings. It is called wasting a move. When the kings are aligned one row apart, it must be your turn to move in order to force the opponent’s king back. If it is the opponent’s turn to move, he will simply move his king out of alignment and you will not be able to force him back. When this happens, you need to waste a move with your rook. You do this by moving your rook sideways one square. This allows you to keep your king where it is, and forces the opponent’s king to come into alignment with it your turn to move.

Of course, you must always be careful not to lose your rook along the way, and not to put the opponent in stalemate, or it will only be a draw. This should be a win for the player with the king and rook every time. 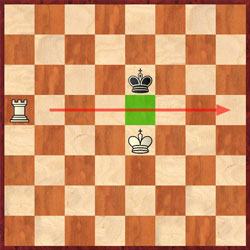 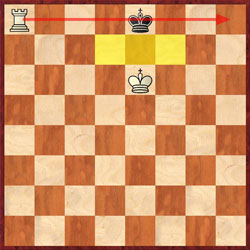 board and mating with a Rook