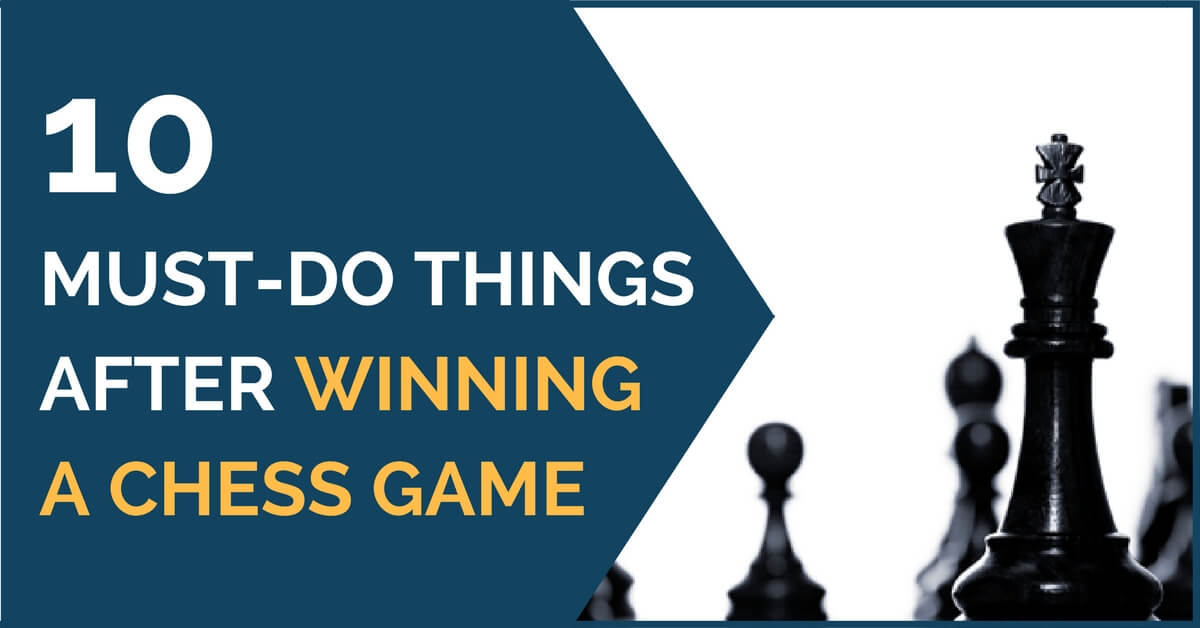 Chess is a complex game.

It requires a lot of knowledge, but also a good psychological preparation and finding the right approach to your games during a tournament.

It is also important to know how to deal with losses and wins – something that usually comes with experience.

Here are a few pieces of advice of things you should do after winning a game.

No matter what the outcome of the game is, you should always maintain a respectful attitude towards your opponent. Humility is a common trait of the great chess players, so keep your composure, talk about the game and wish him/her good luck for the rest of the games.

2.Analyze the game with your opponent

Again, analyzing your game is another thing you should do no matter what the result is [here is An Ultimate Tutorial for Game Analysis] All games contain mistakes, even the won ones. It is important to talk to your opponent about the game, go through the lines you’ve both calculated and share your thoughts about it. This is a very efficient way of learning new things and the path to keep improving your play.

3.Update your own games database

A chess game should be treated the same way after it’s finished, regardless of the result. Wins, just like losses and draws, should be recorded and later on analyzed. Here is what you should do after losing the game.

4.Annotate the game when inserting it

It is important to write down the thoughts you had during the game and the lines you have calculated so you can thoroughly analyze everything once you get home. Many players think that if they’d won the game this step is no longer necessary. On the contrary, all games contain mistakes and in the end, the player who loses is the one who makes the last mistake. As Garry Kasparov used to say,

“Even the game we won always contained mistakes; inaccuracies. It’s inevitable.I can hardly find a one brilliant game with no mistakes”.

To show the importance of analyzing your own games, he went further – “Losing can persuade you to change what doesn’t need to be changed, and winning can convince you everything is fine even if you are on the brink of disaster”.

5.Put it behind you

Once you’ve done the things mentioned above, there is no need to keep thinking about the game or showing off with your win. It is best to apply the same psychology after a game is finished – there are more games ahead to be played and that’s what you should be focusing on.

Winning a game at chess always feels good and it can sometimes give a slight “boost” of energy. Don’t waste it on unimportant things; you will probably need it for the remaining games!

Lack of confidence? 5 Instant confidence boosters just for you.

It is important that you relax and get (psychologically) ready for the next game. Many players prefer to take a walk, meet with friends or have a quiet dinner. Whatever your little relaxing “after-game” ritual is, don’t let it be influenced by the result of a game.

It is easy to lose direction after winning a game, especially if you’re leader of the tournament or you are playing for an important prize. Sometimes all type of thoughts pop up in your head and you start focusing more on the final standing than on the following game(s).

Try to avoid this and chase away any such thought; continue to play chess and give your best during the game. If you play well, it won’t take long before you’ll see your efforts materialized.

Chess is an exhausting game and most of the times we don’t really feel the tiredness until the tournament is over. Especially after winning a game, you might feel like your batteries are recharged, but it probably is only a false sensation.

Make sure you get enough rest so you can meet the rest of the games in good shape.

Winning a game is usually great for your self-confidence and it can give you more strength for the future games. However, the best attitude is to keep your feet on the ground and remain cool.

If you give it more important than you should it might affect the rest of the games is a bad way – for example, getting to underestimate an opponent and thinking that you’ll keep on winning anyway.

This is what you can do to improve your game. Read this.