How many hours per day you do you need to spend on training chess? That’s a pretty common question that chess players are asking day and night. Is there a magic number of hours you need to invest on daily basis to become a FIDE master or a Grandmaster?

Is it the same for all chess players? You can get an answer on these questions straight from the GM Sergey Shipov (2662 peak elo).

How many hours per day you do you need to spend on training chess?

GM Sergey Shipov: “This question is a very popular amongst ambitious chess players who are serious about improving their game. Unfortunately, there is no good answer on this question. The important point that many chess players are missing is not necessarily for how long you need to study, but how and what exactly to study. You can spend many hours on chess; get completely exhausted and not improve much. It is more important to focus on the quality element of your training, and not on the raw time you are spending.

From a professional point of view the work on openings, key variations, and critical continuations that you have problems with takes tremendous amount of time. High level chess players are able to spend all their time preparing the openings. Similarly to the air that occupies all available volume, the opening preparation occupies all time of a chess player. There is no limit how much time one can spend exploring the opening theory. 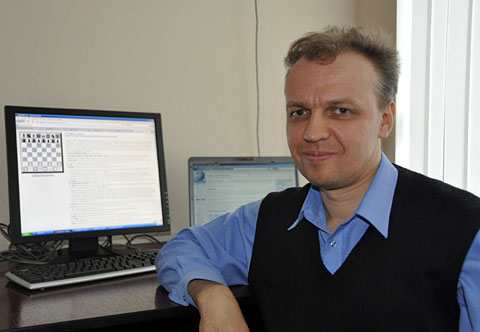 However, for an under 2500 rated chess player, it is a waste of energy to spend that much time on the openings. The training on this stage needs to be balanced. All stages of chess games needs to be developed equally.

I have seen 2000 rated players that understand opening theory on level of strong International Masters. They know have memorized all opening lines and variations, but when you leave the theory behind, they quickly collapse in the middlegame, and know even less about the endgame. And that is funny; just imagine an athlete, with one very strong arm, and anorexic rest of the body. A good chess player needs to be balanced. In your individual work on chess, you need to take that into account, depending on your current level.

If you are an under 2200 player you don’t need to study openings that much and deeply dig into the theory. You need to spend most of your time on endgames, tactics and other fundamental elements of chess.

How much you need to work on chess, is entirely up to you. If I tell you right now that you need to study for 6 hours per day and you will follow my advice and totally collapse after first 2 hours of training, the remaining 4 hours will be just a waste. It will probably have some sort of negative consequences for your health and your view of chess in general.

But, there are some other players that can study for 6 hours without getting tired. Do you think that all professional chess players have the same training schedule? Of course, not! Some chess players can work for 9 hours a day, such as Sergey Karjakin or Fabiano Caruana. Others spend significantly less time on chess, but their training efficiency may be higher [Magnus Carlsen].

Every chess player is different and you need to figure out what works best for you. If you know that you are capable to work more and know what you need to work on, go ahead and do it. Keep in mind that quality of training is much more important than quantity and at some point you will reach your goals.”

Even more effective way to improve positional play is studying well annotated GM games. If you’re serious about it, I suggest checking out our training course. Sure, you need to commit to it for 3 weeks or a little longer, but trust me it’s worth it at the end! We focus on many important elements of the game including positional understanding, attacking play, blunder avoidance, endgame play, tactics, etc.

The interview was translated and transcribed from this video (in Russian).

Ready to start train chess every day? Check out our store and articles: