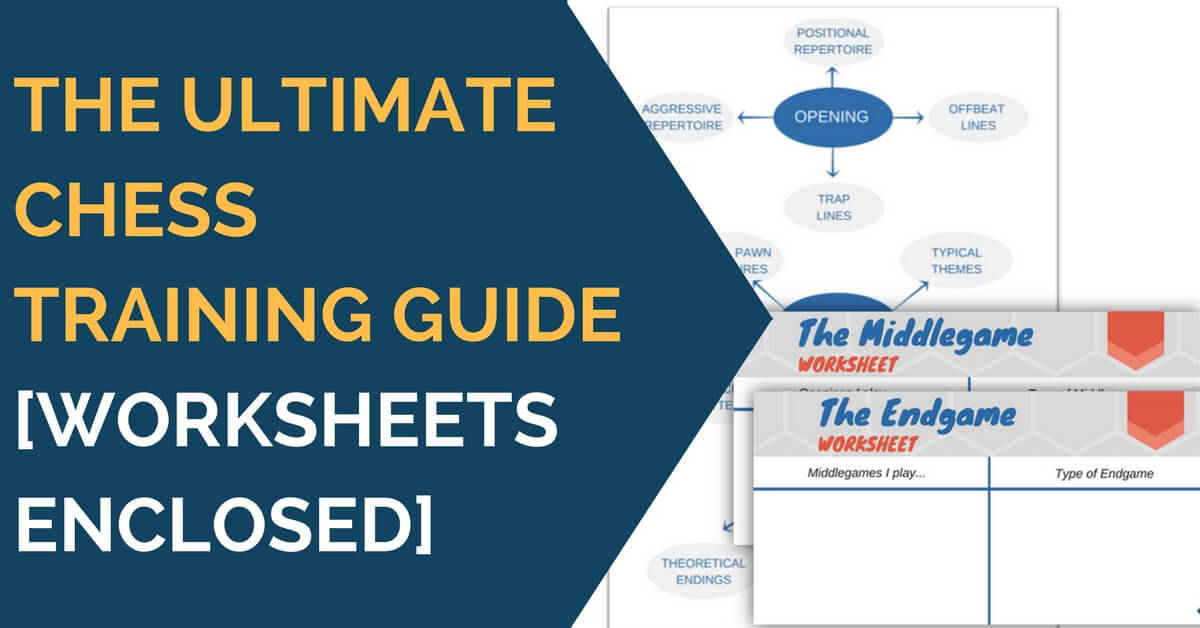 Chess is a very complex game. Perfecting chess involves working on multiple areas of the game at the same time. Most club players focus just on a few elements from the training chart and thus experience a slow progress [or sometimes no progress at all]. One of the most common questions we receive is something like “what should I work on to get better at chess”? Of course, it is impossible to generalize for every single player, but the training chart gives a pretty good idea of what most chess players should focus on. Let’s get started, and I promise after reading this in-depth analysis you will have a much better understanding of what needs to be done.

We all heard the phrase, don’t worry about the opening until you reach 2000 Elo. Many club players interpret it quite incorrectly and don’t work on openings altogether. You still need to work on the openings, because otherwise, you won’t be able to achieve a playable middlegame position, which is equally important on 1400, 1800 and 2000+ levels.

What it means is that you don’t need to spend all or most of your time working on the initial phase of the game. Learning a new opening and going deeper into the opening tree is a long process and will occupy a lot of your training time. Many club players make a mistake of only focusing on openings neglecting everything else. That’s not the right way of doing things. If you dedicate about 20% of your training time to openings you’ll be in great shape [for under 2200 players].

Once this is out of the way let’s talk about the things you need to focus on studying openings.

The idea of working on openings is fairly simple. You want to have a reliable and solid opening repertoire.

You want to have a reliable and solid opening repertoire which can take you from the initial position to a “playable” middlegame which ideally fits your playing style.

The same logic applies whether you are playing with white or black pieces, although you do need separate repertoires for both colors.

What most club players miss is “fits your playing style” part. Oftentimes you can see positional players playing attacking openings and vice versa.

Playing the wrong type of openings is perhaps one of the most common mistakes club players make… and a very deadly one.

It is very important to study openings which fit your playing style!

You can, however, have different types of lines in the opening of your choice. For example, if you are an attacking player, you can have a few positional lines in those attacking openings you play, depending on your status and opponent you can employ those various lines to achieve better results.

Another thing to focus on when it comes to opening preparation is working on traps and off beat lines. Don’t let your opponent surprise you by playing a variation in your opening that you’re not aware of simply because it is not a popular line. Same goes for the opening traps. It is a good thing to be aware of those so you don’t suffer from a premature defeat. We all hate those.

When you work on your openings I suggest keeping a database with all the lines, variation and important remarks. You should update it periodically when evaluation of position changes and you discover new ideas and plans. That’s something we go in-depth with our 21 Day Course’s opening package.

If you want to learn more about the openings, I suggest you check out our openings section.

If you want to have a ready-to-go, bullet proof repertoire in no time, you should consider our Openings Course for Club Players.

This is one of the most important parts of the game, where most attacks, combinations, and defeats happen. Nevertheless, the majority of players don’t pay an adequate amount of attention to it. The middlegame is not something simple and straightforward, and most players get confused what and how they should study.

I suggest spending a big chunk of our training time on the middlegame [probably around 50%]. And here is why. The opening is the first step in the game. As I mentioned previously, its purpose is arriving at playable middlegame that fits your playing style. The main action still happens in the middlegame, so it makes sense to focus more on it.

The same logic applies to opening and the middlegame. The middlegame is a culmination of the game, and it is no surprise that majority of games are won or lost right here.

Once this is clear let’s talk about what exactly you should focus on.

Middlegame can be divided into smaller biteable pieces.  For purpose of this discussion we break it down into the 4 chunks:

For purpose of this discussion we break middlegame down into the 4 chunks:

The most important idea of working on middlegame is not learning every single middlegame and how it should be played. This is very time consuming and even counter-productive. You don’t learn every single opening there is, don’t you? You focus only on the openings you play. It is no different for the middlegame.

You need to figure out what middlegame positions arise from the openings you play and focus on perfecting those.

What I suggest doing is listing all the openings you play as well as the type of middlegame positions those openings lead to. You may probably need to use a chess database and look up this information on the opening you play.

This is very important. I advise you to stop here and fill out the table below with the openings you play and the middlegame types you expect to see. 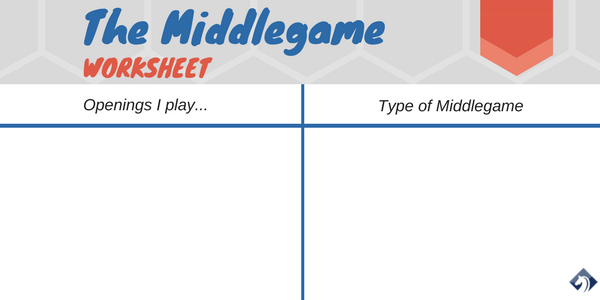 Once you figure out what are the most common middlegames in the openings you play, you can go ahead and study the Typical Themes, Typical Pawn Structures, Attacking Patterns and Defensive Patterns.

You can learn a lot about different types of middlegames from browsing our middlegame section.

If you want to take it a step further, we also have a Comprehensive Course Positional Course dedicated solely to positional chess and the middlegames.

For example, if you play an opening which leads mainly to…

…then those are the criteria for studying the middlegames. You should search for appropriate games on those middlegames, and see how GMs and IMs play it.

You probably already know how to study endgames based on what I said about the middlegame. The whole process is similar; in a way that you need to figure out what endgames are arising from the middlegames you typically play.

That’s why I suggest filling out a chart below [this time for endgames]: 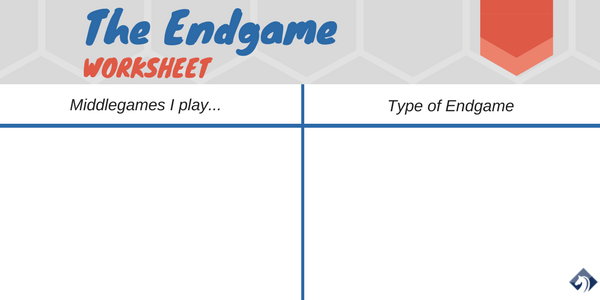 The main difference between studying middlegame and studying endgame is that not only you need to learn the “practical” endgames, which arise from your middlegames, but also the theoretical ones. There are two reasons for that. First, practical endgames generally simplify down to theoretical ones. If you’ve started with many pawns and a minor piece, that most likely would simplify down to the king and pawn endgame.

First, practical endgames generally simplify down to theoretical ones. If you’ve started with many pawns and a minor piece, this most likely would simplify down to a king and pawn endgame. The second reason is that you have less of a control over what pieces get exchanged and when. This may result in some unexpected endgames. That’s why studying fundamental endings is so important.

At this point, you should have a better understanding of what you should work on to improve your game.

Here is the full blowout of the training chart.  If you read the “directions” above it should start making sense. 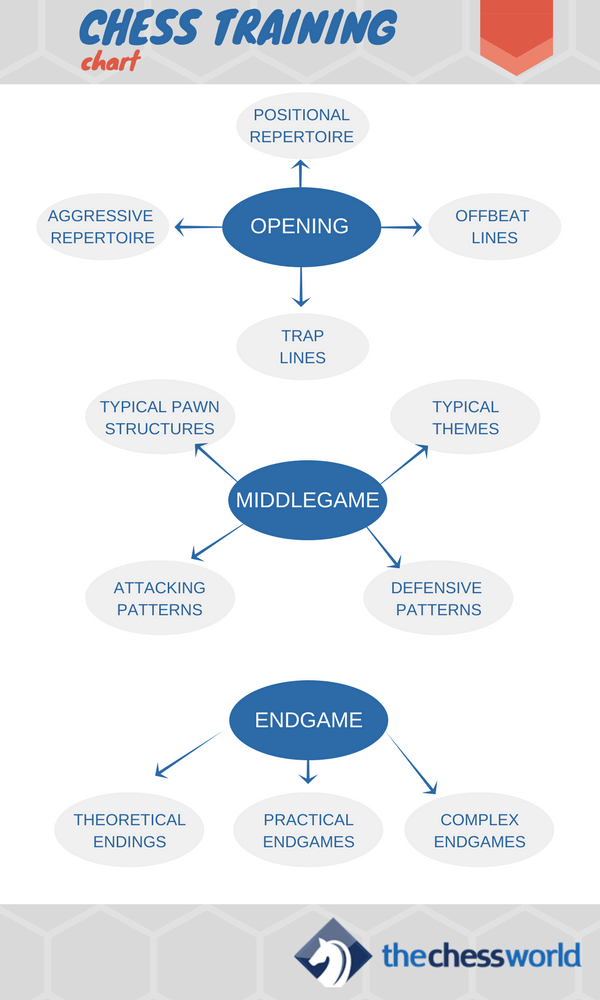 You can go ahead and download this chart for future use.

You can learn the most common types of the endgames and how to play those straight in our endgame section.

If you are looking for a shortcut and faster results is a must, you should consider Practical Endgames for Club Players which goes over 47 most important endgames every chess player must know.