How to play: The rules of chess in 5 minutes

Want to learn to play chess quickly and effortlessly. Well, here is your chance to learn how the chess pieces move, all the chess rules, basic strategy, tactics, special rules and more in 5 minutes or less!

Like any board game there are a number of rules and tactics which should be understood. Chess is no different, and before you can contend with the all-time great chess players, a good strategy and basic knowledge of the game is required.

The game of chess is played between two players: one player controls white pieces, the other one control black pieces. The player playing white pieces is typically referred as White. The player playing black pieces is typically referred as Black. The game is usually being played on a chess board. Chess board is composed of 8 x 8 grids of 64 equally sized squares which are alternatively light (white) or dark (black).
The chessboard is being placed between two players in such a way that black square is on the left side of a player, playing white pieces. 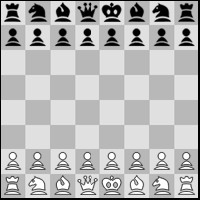 The horizontal rows are called ranks. There are total of 8 ranks: 1st, 2nd, 3rd, 4rth, 5th, 6th, 7th and 8th. The vertical columns are called files. There are 8 files on the chess board: A, B, C, D, E, F, G and H. The straight line connecting two squares of the same color “corner to corner” is called diagonal.
At the beginning of the game one player has 16 white colored pieces; while the other one has 16 black pieces (see the diagram above). Here is a list of all chess pieces with their names and symbols.

The player playing with white pieces starts the game. After the white moves, player playing black has a right of move. It is not permitted to skip moves. If it is a player’s turn he/she must make a move. It is not allowed to move a piece on a square, which is already occupied by the piece of the same color. If the square is being occupied by a piece of opposite color (opponent’s piece), then placement of a piece in place of opponents piece is called “capture”. The opponents piece is being removed from the board and the opposite colored piece is being placed on that square instead (as a part of the same move). The objective of the game is to place the opponent’s king under attack in such a way that there are no legal moves for opponent. This is called checkmate. The player who checkmates opponent’s king wins the game. In a position when it is not possible to checkmate the king, the game is drawn.

Bishop is a long range piece that can move anywhere along the diagonal on which it stands (diagonally). Light squared bishop cannot ever get on the dark squared diagonal. Bishop is worth 3 points (1 point ~ 1 pawn). Here is the example of light squared black bishop. In the center it covers 14 squares. However, bishop’s best placement is usually on the flank on open diagonal: it cannot be easily attacked and it controls a lot of squares.

A rook can move anywhere along the file on which it stands (horizontally). Rook generally considered being stronger than bishop since it can control both light and dark squares. In the center rook controls 16 squares. Rook is worth 5 points. The best position for rook is on the open file 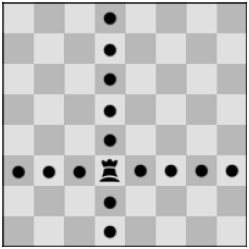 Queen is the most powerful piece on the board. Queen can move to any square along rank, file or diagonal on which it stands. You can think of a queen as a piece that combines powers of both: bishop and a rook.
The queen controls 29 (!!) squares of the chess board while placed in the center. Queen is worth 9 points, or sometimes even 10 which approximately equals to 2 Rooks, Rook+Bishop+Pawn or Bishop+Bishop+Knight. 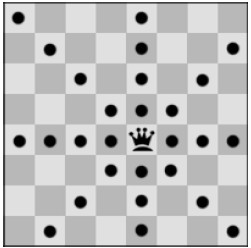 Knight’s moves are “L” shaped. Knight is a unique piece in a sense that it is the only piece in chess army that can “jump” over all other pieces. The diagram below shows that black knight can get to h6, f6 or e7 by jumping over g7 or f7 pawn. The centralized knight is a lot stronger than knight in the corner since it controls 8 squares in the center but only 3 while in the corner. Knight is a short range piece, but is worth 3 points like a bishop. 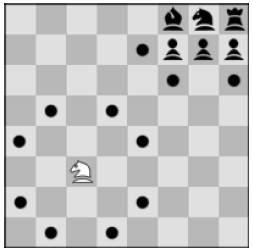 The pawn is the weakest and the least valuable piece in a chess army. “Bad is a soldier that doesn’t dream to become a General” saying perfectly applied to a pawn. If a pawn gets to an opposite end of the board it can be promoted to any chess piece, even the queen. 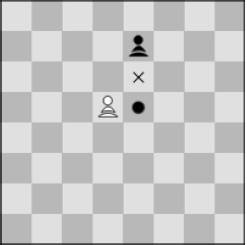 Take a look at the diagram below: if black pawn moves 2 squares to the black dot, white pawn may diagonally capture this pawn only on the following move, but not 2 moves after. And if white pawn captures the black pawn, it’ll get to the x marked square
special moves.

We looked at the “pawn” previously and know that even though it seems like a weakest piece on the board it is definitely a very important one. First of all because it is the most common piece on the board: there are total of 8 pawns for each side in the beginning (but only 2 bishops or knights). Second, the pawn is the only piece that can become a queen or threaten a promotion (we’ll talk about that below) Pawn is often is being compared with a solder in an army. I like to think of pawns as landscape and a solder at the same time. Pawns are being compared to landscape because they dictate the nature of the game. Pawns set the space for piece maneuvers. For example, if position is closed the knight is favorable minor piece, if open – bishop is better.

The general rule of thumb for pawns is: closer a pawn to a promotion square, stronger the pawn is. There are some exceptions or extraordinary circumstances when this is not true (i.e. king and pawn endgame draw), but generally it is the case.

Since pawns are considered to be least valuable on the board they can set up excellent forks: 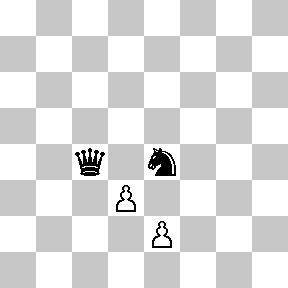 In this example white pawn is getting exchanged for a black knight, which is a good deal for white! 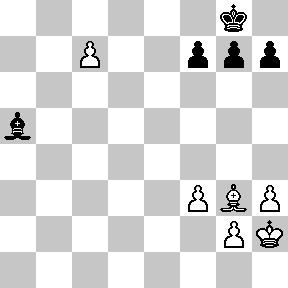 In some cases pawn does not have to fork pieces to get exchanged. At the diagram above white pawn threats a promotion to a queen on c8 with mate. Therefore black have to give up material: take pawn with a bishop 1…Bxc7 2.Bxc7.

Simple Play with a Knight

Knight is the most unusual piece on the chess board. It is very distinct from all other pieces because of its ability to “jump over” pieces. It makes the knight very strong piece. Knight is a slow piece. It is particularly good at the center of a board (opposite to fast bishops). Knights are the best forking piece on the board. Here is the example of “Royal Fork” by the knight: 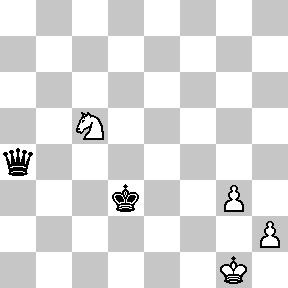 On the diagram below knight placed in the perfect square in the center on e5. Notice that It can not be exchanged on the bishop or driven away by a pawn. From this central square the knight exerts pressure on all critical squares on the board: 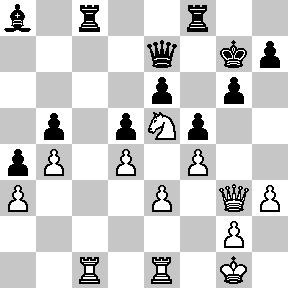