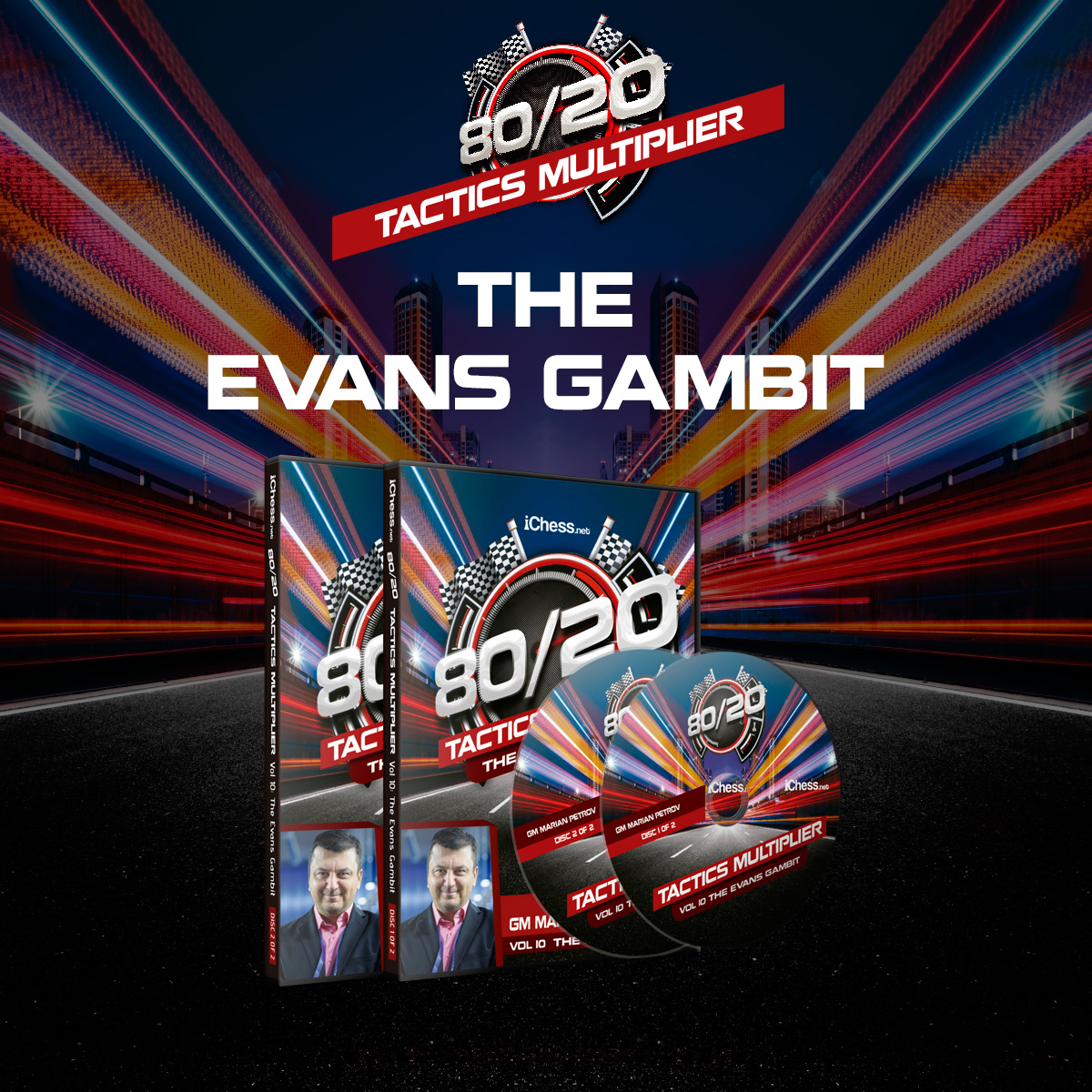 Made famous by Anderssen’s ‘Evergreen Game’ back in 1852, this opening gambit has been a weapon of choice for attackers and chess romantics ever since.

White sacrifices his b-pawn and in return gains a ton of activity, a strong center, and very clear devastating attacking plans…
GM Marian Petrov’s course on the essential tactical patterns in the Evans Gambit gives you a complete understanding of typical tactical and strategic patterns for both sides. The Evans Gambit is one of the most aggressive chess openings that you can play with the white pieces, immediately sacrificing a pawn to obtain a dangerous initiative from the early opening. This ultra-aggressive gambit has been employed by legendary Grandmasters such as Garry Kasparov, Paul Morphy, Hikaru Nakamura, Adolf Anderssen, Misa Pap, and more – proving that it is indeed a reliable opening weapon with the white pieces.

GM Marian Petrov is an accomplished professional chess coach, theorist, and Bulgarian champion in 2002 and 2017, as well as winner of many open tournaments around the world.

Petrov is a FIDE trainer and was the coach of the team of Wales at the Olympiad in Baku in 2016. He graduated from the National Sports Academy in Sofia, Bulgaria with a Bachelor’s degree in Chess Pedagogy, a four-year undergraduate program designed to prepare top-level chess trainers.

GM Petrov believes that simplicity is the key to perfect execution. He only shares proven and tested lines that he or his students have used to dominate their games.

They are easy to understand and extremely powerful, especially at the club level!

80/20 Tactics Multiplier: The Evan’s Gambit features GM Marian Petrov in 8 hours of action-packed lessons revealing everything you need to create tactical masterpieces in this opening.

Discover vicious attacking ideas from old masters of the 19th century, as well as cutting-edge analysis from elites of today.
The aim of this course is to give you a full understanding of the typical tactical and strategic themes in the Evans Gambit, as well as to practice them in the included quizzes featuring carefully selected test positions.

2. Declining the Gambit is NOT ‘Safe’ as proven by Mikhail Botvinnik’s SHOCKING 19 move loss!

3. GMs Lose to it…so YOUR Opponent’s Will Get Slaughtered! Using the deadly analysis of GM Petrov which humiliates GRANDMASTERS…what’s the chance YOUR opponents can resist the attacks you’ll learn?

You’re in for one heck of a ride, so grab your bishop pair, sac your pawns and get ready to checkmate!