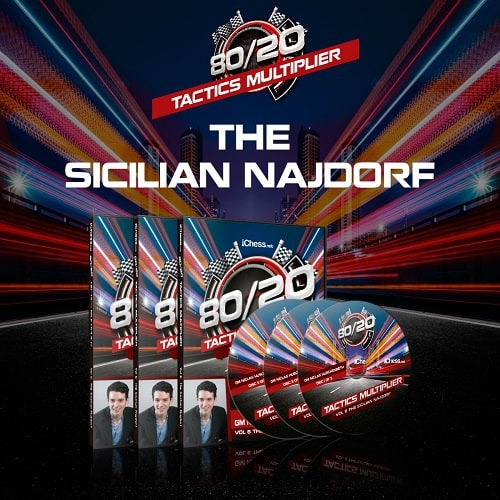 GM Niclas Huschenbeth brings to you a masterclass of chess tactics in the Sicilian Najdorf, giving you a complete understanding of the typical tactical patterns for both sides.

Most people learn an opening by becoming familiar with its typical positional ideas and trying to remember the most important theoretical lines. But this is not enough, especially in an opening as sharp as the notorious Sicilian Najdorf. Here, tactical bloodbaths are commonplace and the player who knows where the weak points are, and how to exploit them, wins.

GM Niclas Huschenbeth brings to you a masterclass of chess tactics in the Sicilian Najdorf, giving you a complete understanding of the typical tactical patterns for both sides.

The asymmetrical pawn structure gives rise to a multitude of tactical shots and ideas with Black’s play generally focusing on the queenside while White tends to play on the kingside.

By understanding how these attacks come about, which sacrifices work and how to deal with your opponent’s threats, you’ll be the one coming out on top.

Niclas Huschenbeth is a young and talented German chess grandmaster. Huschenbeth obtained his grandmaster title at the start of 2012. He has played both sides of the Najdorf for many years. When asked what his favorite openings are for White and Black, he simply responded, “The Najdorf!”

His most notable success to date was becoming the youngest German champion ever, at the age of 18 in 2010. He also represented Germany at the Chess Olympiads of 2008 and 2010. He is currently studying psychology on the East Coast of the United States, where he plays on his university team.

How can I benefit from this course?

80/20 Tactics Multiplier: Sicilian Najdorf helps improve your understanding of the typical tactical themes in the most exciting opening in chess, as well as making you a super-sharp tactician with the included test positions.

Here’s just some of what you’ll learn with this course:

Analyzing the Sicilian Najdorf can be a good starting point to improve your chess tactics because it is an inherently tactical opening. In his course, GM Niclas Huschenbeth analyzes typical motifs for Black and White.

The thematic Knight sacrifice on d5

One of White’s most common piece sacrifices in the Sicilian Najdorf is the knight sacrifice on d5. In the Sicilian, Black usually doesn’t castle quickly. Instead, they aim to improve the position of the queenside pieces first.

This allows White to launch a quick attack against Black’s king, which is sitting on e8. Take a look at the example diagram on the right – in this particular case, the knight d5-sacrifice wins on the spot.

The Rook Sacrifice on c3

Due to the fact that Black’s queenside rook almost always goes to the half-open c-file, Black often has the possibility of sacrificing an exchange on c3. Generally speaking, there are some conditions under which this sacrifice gives Black sufficient compensation for the material investment.

The d5-break in the center

It’s a common theme in the Sicilian Najdorf to aim for a d5-break in the center. Especially in the lines where Black plays an early …e5, the d5-square and the backward d6-pawn are weak.

If you are a Sicilian Najdorf player, or you always have some trouble when someone plays it against you, the 80/20 Tactics Multiplier in the Sicilian Najdorf is definitely going to help you obtain much better results in your games.

Now it is your turn… What are you waiting for?

Learn an opening, learn the winning middlegame ideas and improve your tactics with this 80/20 Chess Tactics Multiplier!