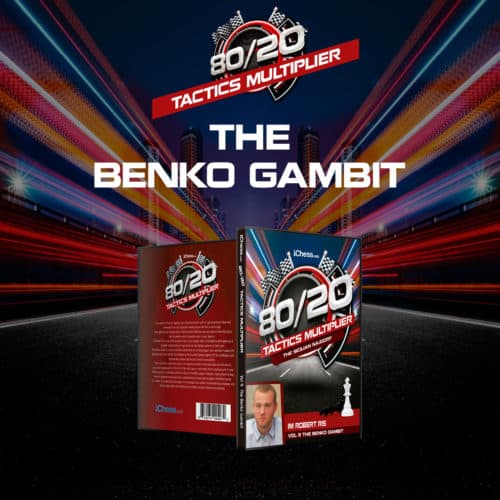 IM Robert Ris’ course on the essential tactics and strategic ideas in the Benko Gambit gives you a complete understanding of typical tactical and strategic patterns for both sides.

The opening got its name in honor of the Hungarian-American Grandmaster Pal Benko, who contributed a lot to the theoretical development of the gambit in the 1960s and 1970s.

In 1974, he published the book The Benko Gambit in which he provided many new ideas and suggestions for Black.

The Benko Gambit has stood the test of time and is still widely employed in the 21st century by Grandmasters and club players alike.

IM Robert Ris’ course on the essential tactics and strategic ideas in the Benko Gambit gives you a complete understanding of typical tactical and strategic patterns for both sides.

The Benko Gambit is a sound, refreshing alternative for all Black players who are tired to play the absolute main lines like the Slav Defense or the Grunfeld Defense against 1.d4. It’s a strategically and dynamically complex opening full of tactical possibilities.

Every opening has its own stock of tactical motifs. Therefore, you also have to know the typical tactical patterns which frequently occur in your opening.

If you want to master an opening, you must become familiar with its typical positional ideas and remember the most important theoretical lines. But this is not enough, you also need to know what are the common chess tactics in that opening.

IM Robert Ris is here to you everything you need to know about the most common chess tactics in the Benko Gambit. You’ll be able to learn all the tactical patterns that could occur in the type of positions arising after this sharp opening.

Here’s part of what you’re getting with this course:

This is possibly the most tactically rich opening in chess! You’ll have an unlimited amount of shocking sacrifices to devastate even your strongest opponents…

Domination on the Dark Squares
With his strong dark-squared bishop on g7, Black usually has control over some key dark-squares in the center and on the queenside. This can quickly lead to tactical ideas for Black.

In the position at hand, Black has the possibility to free his dark-squared bishop with the move 19…d3! White is in huge trouble. 20.Qxd3 d5!! 21.Bxd5 c4+! (see the diagram in the right), for example, loses the
queen.

There’s a bit of theory — but essentially, your plans will be the same. A few powerful knight maneuvers, a few subtle pawn thrusts and yep…that’s about all you need to remember!

This is what every attacking player dreams of…An easy attack with zero counterplay for the opponent! Instead, white is forced to just try to “hold onto his extra pawn” and hope for the best.

This is an opening that brought points (and brilliancy prizes!) to attacking masterminds like Kasparov and Topalov…now let’s see what it can do for you.