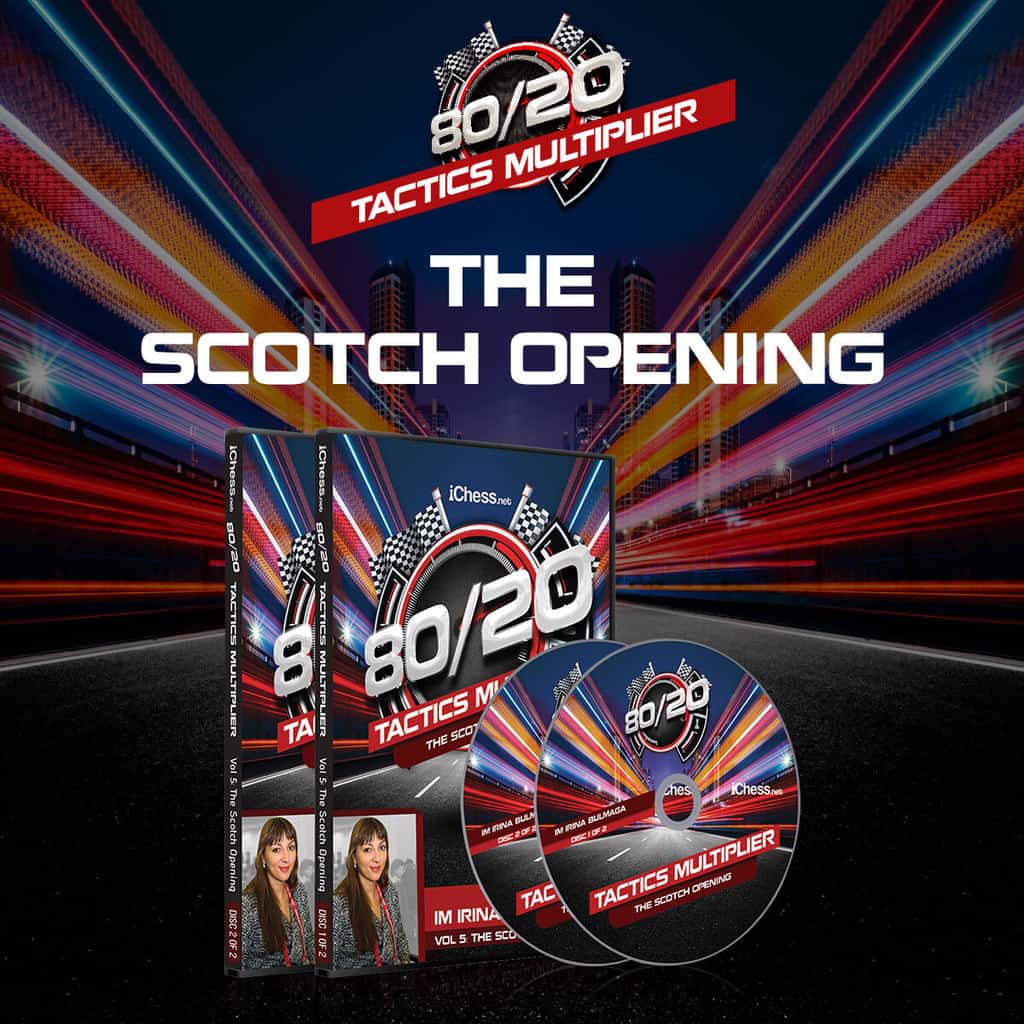 0 Review(s) (0)
$59.95
If you want to master any chess opening, you need to know the typical positional ideas and remember the most important theoretical lines. But this is really not enough.
Add To Cart
About the Course Additional Information Reviews (0)
Product Description

If you want to master any chess opening, you need to know the typical positional ideas and remember the most important theoretical lines. But this is really not enough.

You also need to know the common tactical ideas, the kingside attacks, and positional breakthroughs.

In this 80/20 Tactics course, IM Irina Bulmaga equips you with expert knowledge of the key tactical and strategic ideas in the Scotch Opening – the fantastically powerful weapon Garry Kasparov turned to in his World Championship matches against Karpov and Short.

The Scotch gives you an important psychological edge against 1…e5 players who are comfortable playing the Ruy Lopez and Italian Game, taking them into uncharted territory where you call the shots.

It’s a strategically and dynamically complex opening full of tactical possibilities, making it perfect for players who want the game to be decided by skill instead of just memorizing theory.

Join IM Irina Bulmaga and master an aggressive opening you can use to win games for the rest of your playing days.

Irina Bulmaga is a strong IM and WIM from Romania.

She earned her first FIDE title, WFM, at the age of 11. Irina became the Romanian classical chess Women’s Champion in 2018.

By employing sound, tricky and lesser-known opening ideas against each of the main opening moves, Irina was able to able to consistently get great positions against higher rated players and her rating skyrocketed from 2100-2300 Elo.

The 80/20 Tactics Multiplier series helps you get the most from your study time by combining learning openings with training tactics.

If you’d like to learn all the typical tactical ideas that can arise from the Scotch Game, then IM Irina Bumaga has got you covered.

Here are some of the ideas that you will learn in this 80/20 Tactics in The Scotch Game:

Remember that tactics occur when pieces are in the right places, on active squares. When you have the right structure, with pieces working well together, you will find the tactical shots that decide games.

Generally speaking, you need to be aware that every tactic begins with the idea of having as many of your pieces involved in the game as possible.

Development is key. Combinations in the opening mainly occur because one side is behind in development. When your opponent’s king is in the center for too long, for example, look for central breakthroughs and open the position.

In the Scotch, White has better prospects in the long run because he has more space in the center. But in the short run, he has to worry about being behind in development and activity. If White plays carelessly, the proud center can quickly evaporate.

In general, if Black can open lines against White’s king in the Scotch then Black will have a strong chance of creating a good attack. See the position in the diagram – White is far behind in development. His king is still in the center.

The concept of active piece play is of paramount importance in the Scotch Opening. Bring your pieces together so that they all support each other and work as a unit. This means that you need to prepare your tactics.

Get your pieces working together. Put the pieces on their most active squares – tactics don’t appear out of thin air, so play actively in order to create the opportunities. This is the secret to successful tactics in the Scotch – keeping the pressure up.