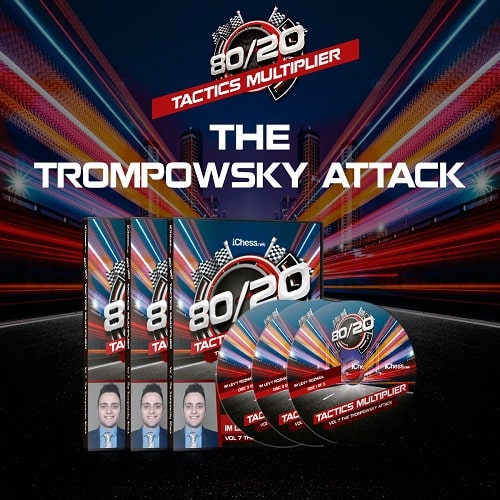 IM Levy Rozman’s course on the essential patterns in the Trompowsky Attack gives you a complete understanding of typical tactical and strategic patterns for both sides.

The Trompowsky Attack is a strategically and dynamically complex opening full of tactical possibilities.

Both sides have a multitude of tactical shots and ideas at their disposal thanks to the asymmetrical pawn structures and imbalances that occur.

It is a perfect opening for players who prefer to understand key strategic and tactical ideas rather than memorize an endless amount of theoretical variations.

The aim of this course is to investigate all the common variations which can arise from the Trompowsky Attack, to improve your understanding of the typical themes in the opening, as well as cementing that knowledge through the included quizzes featuring carefully selected test positions.

Levy Rozman is an American chess player, coach and the captain of the rising Packer Collegiate Chess Team. He has a passion for teaching chess specifically and has devoted the better part of his life to developing his coaching style. Levy is a regular tournament player and a professional chess coach working with players of all ages and skill levels.

IM Levy Rozman has played this opening for over a decade and scored many brilliant victories against opponents of all levels from 2200 FIDE right up to the top Grandmasters. In this course, he shares all his secrets that were previously only accessible to a small group of his private students.

If you want to know an opening, you should be familiar with its typical positional ideas and remember the most important theoretical lines. But this is not enough.

Every opening has its own stock of tactical motifs. Therefore, you also have to know the typical tactical patterns that frequently occur in your opening.

The Trompowsky Attack is a chess opening for White which starts with the moves 1.d4 Nf6 2.Bg5. The opening is named after the Brazilian chess player Octávio Trompowsky who popularized it in the first half of the 20th century.

The Trompowsky Attack is one of the less-usual Queen’s Pawn Openings which allows White to sidestep many of the main lines after 2.c4 or 2.Nf3.

Playing it can be a vital alternative for all 1.d4-players who are tired of repeatedly entering the highly theoretical terrain of all the main lines Black can choose from.

For Black players who play the Grunfeld Defense, the King’s Indian Defense, the Nimzo-Indian, the Slav Defense and so on, their opening knowledge often ends as early as move two.

Here are some of the things you’ll learn from IM Levy Rozman:

In some variations of the Trompowsky Attack, White can transpose into improved lines of other openings.

Not all variations in the Trompowsky lead to crushing attacks. In some lines, White goes for a more positional strategy.

In the Trompowsky Attack, White usually gives up his dark-squared bishop early, but often finds a good square for his light-squared bishop.

We see this important aspect in the game Istratescu – Veys from 2014, covered in the course, where White brings his bishop to c4 early on and soon has the chance to attack Black on the light-squares!

This is an easy-to-learn, bulletproof opening system for White, and in addition to your 8 hours of dedicated openings training — You’ll also get…

The Trompowsky Attack could be your new weapon to start 2019 with a very nice winning streak.