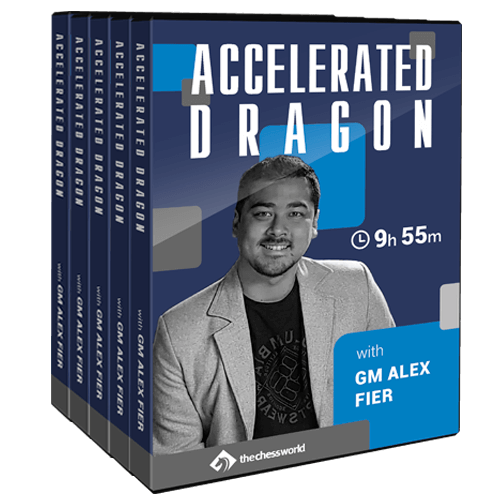 GM Alex Fier’s brand-new course on the Sicilian Accelerated Dragon gives you a complete understanding of essential fundamental ideas and tactical patterns… to get you ready for your next tournament game.

Do you love lightning-fast development, early attacks, and razor-sharp positions? And looking for an opening that challenges White’s 1.e4 and often makes it look “silly”?

The Accelerated Dragon—an improved version of the Sicilian Dragon—is the right opening for you.

It is a sound opening where you do not rely on cheap tricks or traps. You can play for solidity and equality, and if White is not careful, you can turn the tables pretty quickly too.

And since you don’t play the d7-d6 early on, you don’t fall prey to the dangerous Yugoslav Attack like in the Dragon Variation.

Also, who wants to study tons of theory in the Sicilian Dragon, right?

That’s where the Accelerated Dragon scores again… where you do NOT have to study for hours to survive the first 15 moves.

GM Alex Fier’s brand-new course on the Sicilian Accelerated Dragon gives you a complete understanding of essential fundamental ideas and tactical patterns… to get you ready for your next tournament game.

Most Sicilians involve entering a black hole of theory, but not this one! The serpentine-like Accelerated Dragon is light on its feet and dangerous from the moment it appears.

★★★★★
Alejandro (Apr 10, 2021)
This is an absolutely fantastic course! Not only are the variations extremely interesting, well suited for a dynamic and attacking style, but they are also very clearly explained. Top notch work, I would recommend it 100%!

★★★★★
John D. (Apr 02, 2021)
Great pleasure to watch GM Alex Fier excellent treatment of Accelerated Dragon. Very well put together course that will be useful for anyone 1200-2200 and above! Kudos.
Add a review