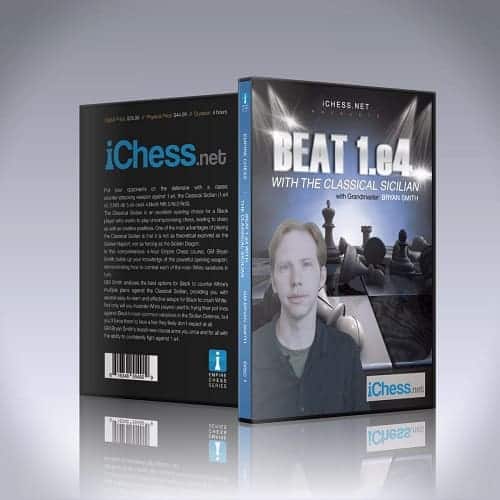 GM Smith analyzes the best options for Black to counter White’s multiple efforts against the Classical Sicilian, providing you with several easy-to-learn and effective setups for Black to crush White.

The Classical Sicilian defense is an excellent opening choice for a Black player who wants to play uncompromising chess, leading to sharp as well as creative positions. The Classical Variation of the Sicilian Defense is a chess opening for Black against 1.e4. It is a semi-open opening and has a reputation for being sharp and double-edged. It occurs after the moves 1.e4 c5 2.Nf3 d6 3.d4 cxd4 4.Nxd4 Nf6 5.Nc3 Nc6.

GM Smith analyzes the best options for Black to counter White’s multiple efforts against the Classical Sicilian, providing you with several easy-to-learn and effective setups for Black to crush White.

In this comprehensive 4-hour Empire Chess course, GM Bryan Smith builds up your knowledge of this powerful opening weapon, demonstrating how to combat each of the main White variations in turn.

Not only will you frustrate White players used to trying their pet lines against Black’s most common variations in the Sicilian Defense, but they’ll also face a line they didn’t expect at all.

The Classical Sicilian defense also gives you excellent winning chances due to its complexities. It is a highly flexible, tricky, and double-edged opening with which Black can avoid premature simplifications and confidently go for the full point.

Here’s what you’ll learn with this course:

Just when your opponent thinks he has a strong attack with Qf3 — YOU play …Qf6!! and sac a pawn — 90% of players will accept the pawn and the compensation you get is HUGE…look at those bishops!

A lot of players think they can crush any Sicilian with the English attack. Luckily, GM Smith has a clever knight hop sequence shutting it down immediately and gaining a big advantage for black!

You’re gonna love the moment you get to play this clever king move …Ke7!! (diagram) centralizing the king and preparing your own attack on the white king (Don’t worry…your king is COMPLETELY safe on e7!)

And like most of our courses, you’ll also get Complete PGN file of all covered games/examples, Challenging Puzzles for testing your knowledge, plus, a Comprehensive Summary PDF that’ll be your reference guide and blueprint for the course.

GM Bryan Smith’s brand-new course arms you once and for all to confidently fight against 1.e4 players.