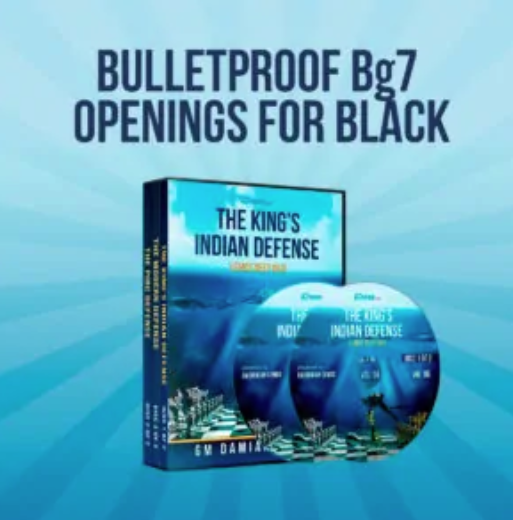 In around 30 hours of deep content, GM Damian Lemos is fully dedicated to teaching you the strategic ideas of the Pirc, Modern, Accelerated Dragon, and King’s Indian Defense

If you are a tournament player looking for a definitive repertoire for Black that will be based more on positional understanding and strategical thinking and less on memorizing tons of theory, this is the bundle for you!

In around 30 hours of deep content, GM Damian Lemos is fully dedicated to teaching you the strategic ideas of the Pirc, Modern, Accelerated Dragon, and King’s Indian Defense – four openings that share ideas and themes, and play often transposes between them. This is a complete repertoire for Black.

You will learn grandmaster strategies that will turn your position into total domination of the a1-h8 diagonal, plus many other ideas to give your opponents hell.

Bulletproof Bg7 Openings for Black by GM Damian Lemos works perfectly as both a complete training course on each of the chess openings and as an invaluable reference guide for the many advantageous transpositions that there are. The Kingside Fianchetto is a resource you can play for life, at whatever level you are, so studying several openings that employ it is time well spent.

How do I benefit from this bundle?

If you’re looking to finally solve what you will play as Black 1.e4 and 1.d4, there are several reasons why you should consider playing the openings that include a fianchettoed Bishop on g7:

Posting a bishop in the long diagonal poses several discovery threats that are the delight of players, but are as sound as they come – both intermediate and advanced players handle this set up successfully at their level, and even while playing against higher rated players!

If you don’t like to get dragged into long theoretical preparation in the most common openings where you will have to play cautiously while your opponent doesn’t even think and just fires one move after another, this is the solution.

One they know inside-out. One that generates killer attacks, is easy to defend and come with a ton of positional advantages.

This is a complete GM repertoire for Black, combining theory, ideas and model games to give you a set up that you understand perfectly. All brilliantly explained by one of the world’s top trainers.

Here’s what we’ve included in this bundle:

Put your opponent on the defensive with the classic counter-attacking weapon against 1.d4 – the King’s Indian Defense – the choice of World Champions from Bobby Fischer to Garry Kasparov.

In this comprehensive 9 hour Deep Dive course, GM Damian Lemos reveals all you need to know to become an expert in the King’s Indian Defense (1.d4 Nf6 2. c4 g6 3. Nc3 Bg7), demonstrating how to combat each of the main White variations in turn.

The active King’s Indian Defense repertoire recommended by GM Lemos will frustrate White players used to trying their pet lines while giving Black excellent chances to play for a win in all variations.

In this comprehensive 8-hour Deep Dive course, GM Damian Lemos builds up your knowledge on one of the most dynamic chess openings for Black, the Pirc Defense.

With Super GMs like Grischuk, Ivanchuk, and Kramnik adopting this opening, you’re in an excellent company and can enjoy being a master of one of the most exciting opening options available to Black.

As well as a huge theory section covering all reasonable setups White might try against the Pirc, GM Lemos shows how these ideas play out in practice through the analysis of instructive games, making sure you’re ready with the most powerful reply!

This is a great way to frustrate your rivals who are used to playing their pet lines as they will end up getting lost in the Pirc’s complexities. The Pirc Defense gives you excellent winning chances as it’s a highly flexible, tricky, and double-edged opening with which Black can avoid premature simplifications and confidently go for the full point.

Whether you prefer quiet strategic positions or wild tactical positions, the Modern Defense (1.e4 g6) gives you the flexibility to push the game in a direction where you feel totally comfortable.

That’s why GMs like Aronian and Andreikin have really taken notice and are adopting this opening, often winning beautiful games in the process.

In this course, Grandmaster Damian Lemos demystifies the Modern Defense — breaking down all of the theory, strategic plans and attacking ideas at your disposal.

GM Lemos also points out the critical strategic differences that distinguish this opening from the Pirc Defense, revealing how you could even combine the two openings to create the ultimate repertoire against 1.e4.

Your 6 hours training with Damian will fly by quickly as you soak up more and more weapons and add them to your arsenal — you’ll be dying to unleash them on unsuspecting 1.e4 players in your next tournament.

The Accelerated Dragon in the Sicilian Defense – GM Damian Lemos

The Accelerated Dragon is a great choice for players who want an aggressive opening they can play against a number of White set-ups. Know what you’re doing and you have fast development, great activity and a tough to crack position.

In this 8 hour Deep Dive course, GM Damian Lemos builds up your knowledge of this powerful opening weapon, starting with the main ideas and delving into the hidden nuances which will allow you to claim the full point against 1.e4 players.

GM Lemos covers all of White’s main options, pinpoints all the things to watch out for, gives his most trusted suggestions and shows how they play out in practice by analyzing memorable model games.

With players like Carlsen, Kasparov, Ivanchuk and Maxime Vachier-Lagrave adopting this opening, you’re in an excellent company and can enjoy being a master of one of the most exciting opening options available to Black.