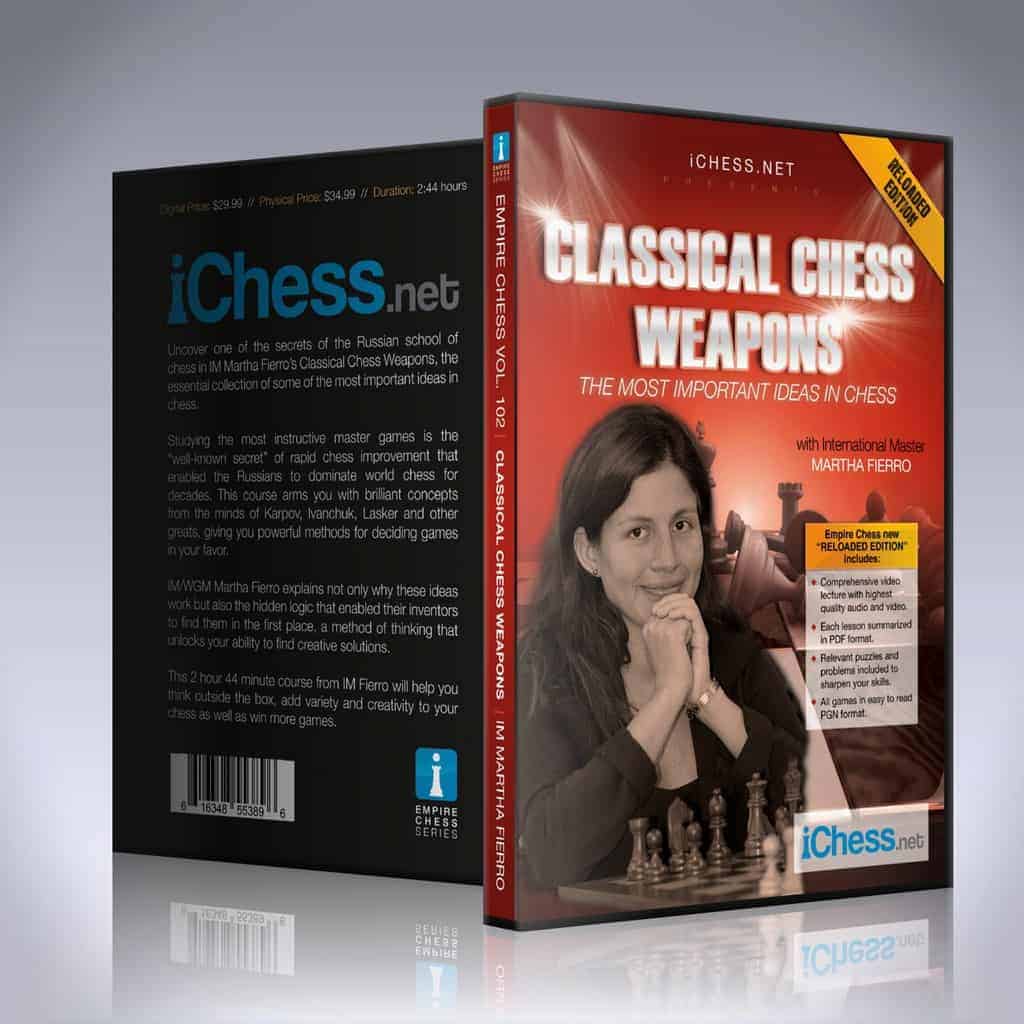 In this 2 hours 44 min course Classical Chess Weapons: The Most Important Ideas in Chess, IM Fierro shares 7 of the most potent and mind-altering chess ideas in history.

The truth is, most masters have “patterns” from thousands of games in their minds, which they’re able to access at any time.

The intuition developed from studying these examples, is precisely that “secret sauce” which separates the novice from the master.

In this 2 hours 44 min course Classical Chess Weapons: The Most Important Ideas in Chess, IM Fierro shares 7 of the most potent and mind-altering chess ideas in history.

Each of her lessons draws upon the games of chess heavyweights such as Karpov, Lasker, and Ivanchuk to “install” in your brain the chess patterns that recur most often, and will give you the greatest “bang for your buck” in terms of rapidly improving your playing strength.

So whether you’re discovering Ivanchuk’s method to dominate opposite castling positions (chapter 4), Ponomariov’s technique for making powerful intuitive sacrifices (chapter 7), or you want to learn the elements that allow for Karpov’s positional mastery (chapter 1) – with IM Fierro’s course, you are truly uncovering the closely-guarded skills of these masters.

Let’s see an example from the course:

This is the type of “intuitive idea” you’ll learn in the course and later, confidently play in your own games.

In case you’re wondering, after 17.Bxe4 Bxh2+ 18.Kh1 fxe4 black has huge positional compensation for the rook and indeed a much superior position overall.

If you truly want to evaluate both tactical and strategic positions in the same way as a master, Classical Chess Weapons: The Most Important Ideas in Chess is an excellent place to start.

IM Fierro is a U.S born chess master of Ecuadorian heritage who has amassed several Pan-American chess titles, Chess Olympiad medals and tournament wins since entering the chess scene in the mid-nineties.
She has represented Ecuador in ten Chess Olympiads, is a FIDE vice president and has a peak ELO Rating of 2411.