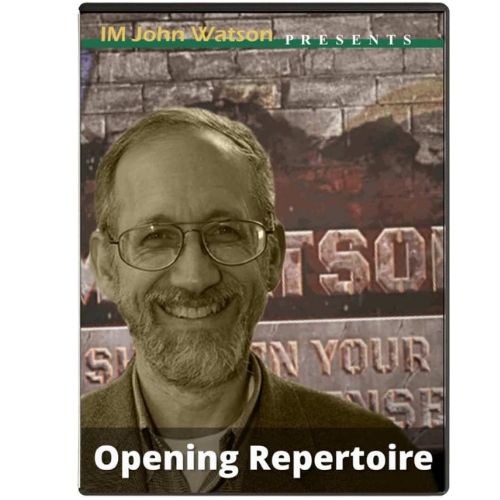 If you are a chess player rated between 1200 and 2000 and are tired of getting nothing out of the opening then you’re going to get a huge benefit from IM John Watson’s complete chess openings repertoire.

If you are a chess player rated between 1200 and 2000 and are tired of getting nothing out of the opening then you’re going to get a huge benefit from IM John Watson’s complete chess openings repertoire.

IM John Watson is an award-winning chess writer, coach, and opening a theoretician praised for his emphasis on explaining key strategic ideas instead.

If you’ve ever felt overwhelmed trying to memorize dozens of seemingly senseless moves then John’s course will come as a welcome relief!

Learning chess openings should be fun and teach you something new about chess too yet many players don’t know where to start.

You pick up some tips on the Sicilian but your next 5 opponents all play the French. What to do?

That’s why IM John Watson has put together a complete chess openings repertoire for you. You’ll learn complete systems to confidently take on both 1.d4 and 1.e4 players as Black, namely the Chigorin (1.d4 d5 2.c4 Nc6!) and French Defenses (1.e4 e6).

You can become an expert in both of these systems based on understanding the main strategic ideas such as the …e5 break and attacking White’s pawn center with …f6/…c5.

One of the advantages of the Chigorin is many 1.d4 players won’t be expecting it. Despite its rarity, it has been played by many top GMs including attacking genius Morozevich and former World Champion Vassily Smyslov.

Of course, you want to get a big advantage as White as well. John gives you his recommendations for all the responses to 1.e4, including the popular Sicilian, Caro-Kann and Pirc Defenses.

John Watson is a chess International Master and author, he was born in Milwaukee and grew up in Omaha, Nebraska.

Watson is best known as a chess theorist and author, He has written more than thirty books on many aspects of chess. His 1999 book Secrets of Modern Chess Strategy won the British Chess Federation’s Book of the year award as well as the United States Chess Federation Book of the Year.

The successor volume Chess Strategy in Action was the Chesscafe Book of the Year. These two books explore and theorize how radically chess has changed since the early 20th century, and how old and supposedly ‘time-tested’ rules for the conduct of play have been replaced by broader and revolutionary practice over-the-board.

With over 30 hours of master-level instruction, you will be well prepared to face anything across the board. Featuring the high-quality products we’ve come to expect from ICC, this complete opening repertoire will help you win games up to and beyond the 2100 level.

What makes this course unique?

What makes this series stand out is John’s commitment to making the material easy-to-learn while including only the very best lines. Study these courses and you’ll get a great position even if your opponent plays something unexpected – your understanding of what you should be trying to do will make it easy to find a strong move.