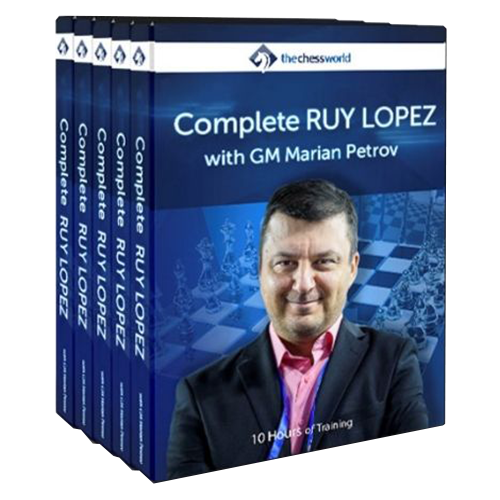 GM Marian Petrov is back with his complete guide to this fascinating opening. His 10-hour Complete Ruy Lopez walks you through every major variation, explaining how the different choices change the dynamic of the game.

The Ideas behind every Major Ruy Lopez Variation, Backing them up with Model Games Played by World Champions from Steinitz to Magnus Carlsen!

Right now, the Ruy Lopez is THE most important opening you can learn.

It may have been played for over 500 years but Google’s AI AlphaZero not only rediscovered it, it proved the Ruy Lopez is the BEST continuation for both colors after 1.e4.

It’s the opening that Kramnik used to take Kasparov’s world crown. It’s one of the two openings that Anand says all players simply must master if they want to get really good at the game.

It’s strategic, tactical, have played on the queenside, kingside and in the center. Direct attacking play, positional squeezes. Learn how to play the Ruy Lopez well and you’re not just learning an opening, you’re learning chess.

GM Marian Petrov’s brand-new 10-hour Complete Ruy Lopez walks you through every major variation, explaining how the different choices change the dynamic of the game.

Each variation has a theory and practice section, with GM games (mostly from World Champions) illustrating the middlegame themes and strategies.

Some of what is covered in Complete Ruy Lopez:

Studying GM Petrov’s lessons is the clearest path to becoming adept at the Ruy Lopez, the opening everyone is going to be playing by next year.

This is your real chance to get ahead of the curve!

GM Marian Petrov is back with his complete guide to this fascinating opening. His 10-hour Complete Ruy Lopez walks you through every major variation, explaining how the different choices change the dynamic of the game.