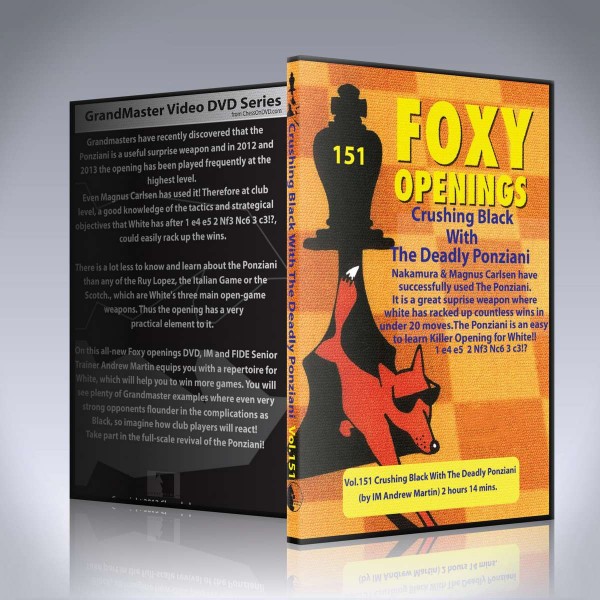 The Ponziani Opening is a useful surprise weapon, and in 2012 and 2013 this ancient attack has been played frequently at the highest level. Even Nakamura and Magnus Carlsen have successfully used the Ponziani, and White has effectively racked up countless wins in under 20 moves.

The Ponziani Opening is a useful surprise weapon, and in 2012 and 2013 this ancient attack has been played frequently at the highest level. Even Nakamura and Magnus Carlsen have successfully used the Ponziani, and White has effectively racked up countless wins in under 20 moves. Martin’s point is that the Ponziani is an easy to learn killer opening for White! This DVD supplies a good knowledge of the tactics and strategical objectives at White’s command after 1.e4 e5 2.Nf3 Nc6 3.c3!?, and we point out that there’s much less to learn about the Ponziani than the Ruy Lopez, Italian Game or Scotch Opening. Thus the Ponziani is a very practical choice, apart from its intrinsic strength.

Senior Trainer Andrew Martin equips you with a sound repertoire for White, which will help you to win more games. You will see plenty of Grandmaster examples where even very strong opponents flounder in the complications as Black, so imagine how club players will react! Take part in this full-scale revival of the Ponziani!