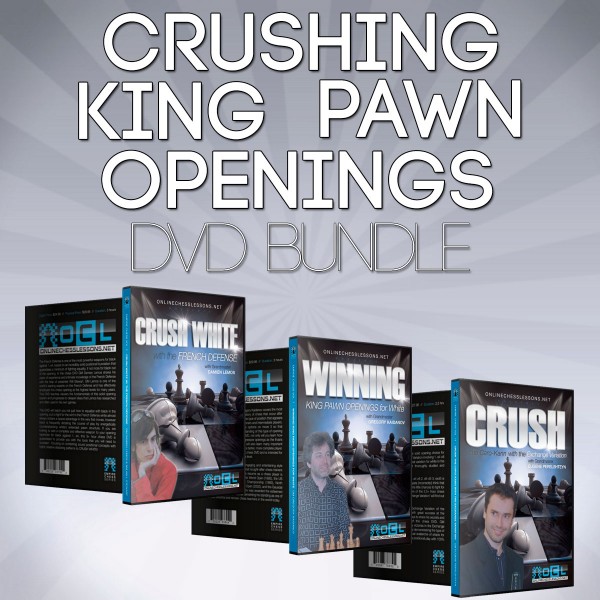 “Crushing King Pawn Openings” gives you a strong foundation for the French, Caro-Kann and Italian Game/Giuco Piano, all of which occur frequently and have unique characteristics.

“Best by test!” was how Bobby Fischer described 1.e4. Now, this bundle of 3 fantastic Empire Chess DVDs will provide you with great weapons to use with and against the most popular first move in the game.

With so many possibilities in chess, it is not enough to be familiar with just one opening – not only will you go wrong when playing something else but you are also missing out on understanding how to play different types of positions.

“Crushing King Pawn Openings” gives you a strong foundation for the French, Caro-Kann and Italian Game/Giuco Piano, all of which occur frequently and have unique characteristics.

Whichever side of the board you sit on, knowing the advice from Grandmasters Lemos, Kaidanov and Perelshteyn will give you a massive competitive advantage over your opponent. Each DVD explores the relevant opening plans, strategic and tactical themes and most precise move orders for each side, fully preparing you for whatever happens on the 64 squares.

“Crushing King Pawn Openings” not only arms you with great openings, but it will also increase your understanding of chess with the GMs’ clear explanations of middlegame ideas.

Grandmaster Damian Lemos makes the French Defense your new favorite weapon against 1.e4 with this DVD focusing on his pet lines and recommendations. The French are both solid and full of attacking potential; White is invited to play e5 and over-extend, allowing Black to chip away at the center, open lines and rapidly unleash serious pressure. Knowing the key ideas for both sides will enable you to find the right moves in any position and spot a mistake by White instantly.

Grandmaster Gregory Kaidanov delves into the deep possibilities that occur after 1.e4 e5 2.Nf3 Nc6 3.Bc4 – a position that was seen all the time in the Romantic Era of attacking chess! Covering all the move 3 responses, GM Kaidanov ensures you are well prepared for whatever Black plays. With hyper-aggressive openings such as the Evans Gambit and Fried Liver attack, you will learn many thematic attacks, sacrifices and general middlegame concepts making you a more complete – and very exciting! – player.

Grandmaster Eugene Perelshteyn explores the rarer exchange variation of the Caro-Kann showing how many 1…c6 players can quickly be taken out of their comfort zone. White develops his Bishops rapidly, pressurizing Black from the very start. The second player can easily go wrong early and GM Perelshteyn shows just how to capitalize on this! A great choice to force Caro-Kann players to think for themselves, the Exchange variation is completely sound and full of attacking ideas.