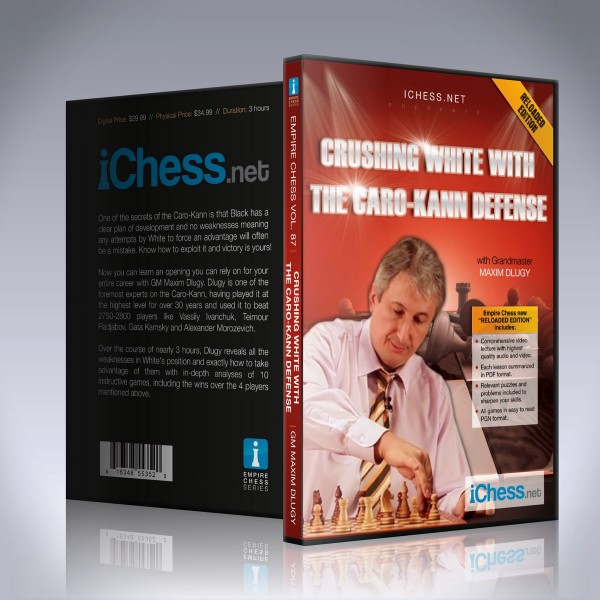 Join World Champions Capablanca, Botvinnik, Petrosian and Karpov in making the Caro-Kann your weapon of choice against 1.e4.These chess legends knew that behind the quiet appearance of 1…c6 is a formidable system based on sound positional principles and containing hidden venom.

Join World Champions Capablanca, Botvinnik, Petrosian and Karpov in making the Caro-Kann your weapon of choice against 1.e4.

These chess legends knew that behind the quiet appearance of 1…c6 is a formidable system based on sound positional principles and containing hidden venom.

One of the secrets of the Caro-Kann is that Black has a clear plan of development and no weaknesses meaning any attempts by White to force an advantage will often be a mistake. Know how to exploit it and victory is yours!

Now you can learn an opening you can rely on for your entire career with GM Maxim Dlugy. Dlugy is one of the foremost experts on the Caro-Kann, having played it at the highest level for over 30 years and used it to beat 2750-2800 players like Vassily Ivanchuk, Teimour Radjabov, Gata Kamsky and Alexander Morozevich.

Over the course of nearly 3 hours, Dlugy reveals all the weaknesses in White’s position and exactly how to take advantage of them with in-depth analyses of 10 instructive games, including the wins over the 4 players mentioned above.

Exclusive Grandmaster/Master Video by a brilliant presenter. We preselect only the most compelling and interesting Grandmasters and Masters to make DVDs for us.
Highest quality audio and video available with Grandmaster Webcam. No more wasted time listening to low-quality videos where it’s hard to hear the audio and video.
In-depth text chapter summaries in PDF format of each DVD’s content to easily reference if you need a quick refresher on a specific topic.
20 relevant and challenging practice problems per disc with solutions so you can test your learning and knowledge.
PGNs included for every game so you can plug the games into your favorite chess engine.
Brought to you by iChess.net – The World Leaders in DVD education.