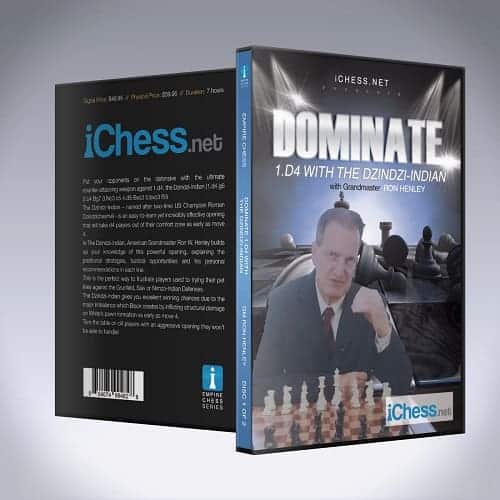 The Dzindzi Indian is designed to give you an easy-to-learn yet powerful and incredibly effective weapon that you can employ with Black as early as move five (!) against “Queen’s Pawn” players.

The Dzindzi Indian derives its name from the Georgian Grandmaster Roman Dzindzichashvili (jin-jee-khash-vee-lee) who emigrated via Israel to New York City in the late 1970s and went on to win 3 US Championships.

The Dzindzi Indian is designed to give you an easy-to-learn yet powerful and incredibly effective weapon that you can employ with Black as early as move five (!) against “Queen’s Pawn” players.

At the 1998 US Amateur Team Championships in Somerset New Jersey, sat next to GM Ron Henley on board #1, was the Twelfth World Champion, Anatoly Karpov.

Imagine Ron’s and Anatoly’s surprise when a USCF Rated 1900 player whipped out the Dzindzi Indian against Karpov! It was an absolutely great choice as it was one of the few openings Anatoly did not have much experience in.

Being a true Champion, Karpov went into a deep think and then proceeded to win a very tough double-edged game. A few days later over breakfast, Grandmasters Dzindzichashvili and Henley were discussing the game. Roman demonstrated how Black could have held the position and even achieved excellent counterplay.

The Dzindi Indian is an amazing opening for a number of reasons. It is one of the very few openings in chess where tournament results actually favor Black! This is not a skewed perception but is grounded in statistical fact.

If you want to utterly destroy your opponents, forcing those smug 1.d4 players to work hard from the very first moves, The Dzindzi Indian is simply perfect.

In this course, GM Ron. W Henley unlocks the Dzindzi Indian secrets which were his own private prep for decades, and are only now being exposed.

Here’s part of what you’ll learn with this awesome opening system for Black:

Dzindzi Indian is Easy to Grasp:

White only has a small number of responses that are considered theoretically challenging to the Dzindzi Indian. You will discover how to meet those challenges and you’ll study Black’s plans and tactical motifs that allow you excellent counterplay.

Ron Henley shares strategies that he and Roman Dzindzichashvili have analyzed, as well as exciting new ideas that have been introduced by top international players.

An opening system that you can play for a LIFETIME:

Roman has been playing this opening for several decades since he first conceived it and Henley has played it with excellent results for over 15 years. Once you learn the Dzindzi Indian you can play it with success for as long as you play chess.

Unprepared White opponents meeting the Dzindzi Indian can easily find themselves disoriented and their pieces lacking communication and mobility, especially if it is the first time they have faced it.

You’ll learn how to take advantage of any move from White that is less-than-precise, finding yourself in a good position to win your games with Black.