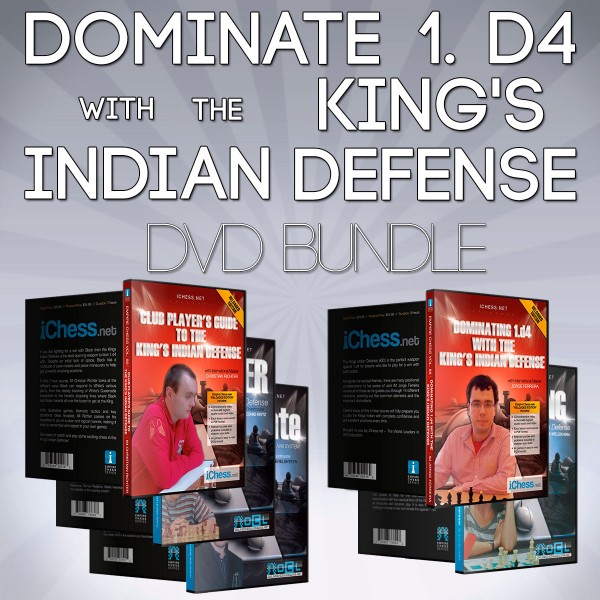 0 Review(s) (0)
$29.99
The King’s Indian Defense was a favorite weapon of both Bobby Fischer and Garry Kasparov when they wanted to win with Black against 1.d4 – which was most of the time, neither played for draws! From a seemingly cramped position, Black uses pawn breaks and thematic piece maneuvers to create hugely powerful attacks against the White King.
Add To Cart
About the Course Additional Information Reviews (0)
Product Description

The King’s Indian Defense was a favorite weapon of both Bobby Fischer and Garry Kasparov when they wanted to win with Black against 1.d4 – which was most of the time, neither played for draws!

From a seemingly cramped position, Black uses pawn breaks and thematic piece maneuvers to create hugely powerful attacks against the White King. Sacrifices and brilliant, unexpected moves are common in this exciting opening – but it is essential to understand the intricacies of it properly. A lack of knowledge will leave Black with a passive and restricted position and White will win as they please.

Thankfully you have the expertise you need to crush White and get many spectacular wins with “Dominate 1. d4 with the King’s Indian Defense”, a bundle of 5 DVDs presented by King’s Indian specialists.

By focusing the instruction on core concepts, attacking formations and plans the presenters make sure you will understand the King’s Indian far better than your opponent does – by the time they realize what is happening, it will be too late!

If you want a versatile and aggressive response to 1.d4 then “Dominate 1. d4 with the King’s Indian Defense” is the perfect solution.

Based on strategic themes and ideas, the 6…Na6 variation of the King’s Indian is perfect for players who like to understand their openings instead of just memorizing hundreds of lines. Grandmaster Perelshteyn explains the core concepts Black should keep in mind, his positional goals, tactical formations and what ideas White will have that he needs to watch out for. With crystal clear explanations and demonstrations of all the plans in practice, GM Perelshteyn prepares you for great success as a King’s Indian player.

GM Kritz is a highly respected chess coach with over 10 years experience and this shows in “Conquer with the King’s Indian Defense¨ as he conveys the ideas and plans for both sides in the main lines. Perfect for ambitious players who have little experience with the King’s Indian but want to take advantage of its many attacking possibilities and win more games with Black.

FM Alisa Melekhina broadens your repertoire by covering several variations of the King’s Indian, including how to face the Bayonet attack in the Classical line, what your positional aims should be after exd4 as well as covering the versatile 7…Nbd7 and surprise weapon 6…Bg4!? FM Melekhina details the key plans and structures in each variation and helps you to choose the line that fits your style of play too.

The Kings Indian Defense (KID) is the perfect weapon against 1.d4 for players who like to play for a win with both colors. A careful study of this 4-hour course will fully prepare you to play the Kings Indian with complete confidence and get excellent positions every time.

In this 7 hour course, IM Christian Richter looks at the different ways Black can respond to White’s various plans, from the steady blocking of White’s Queenside expansion to the frenetic attacking lines where Black sacrifices material all over the board to get at the King.

We use cookies on our website to give you the most relevant experience by remembering your preferences and repeat visits. By clicking “Accept All”, you consent to the use of ALL the cookies. However, you may visit "Cookie Settings" to provide a controlled consent.
Cookie SettingsAccept All
Manage consent