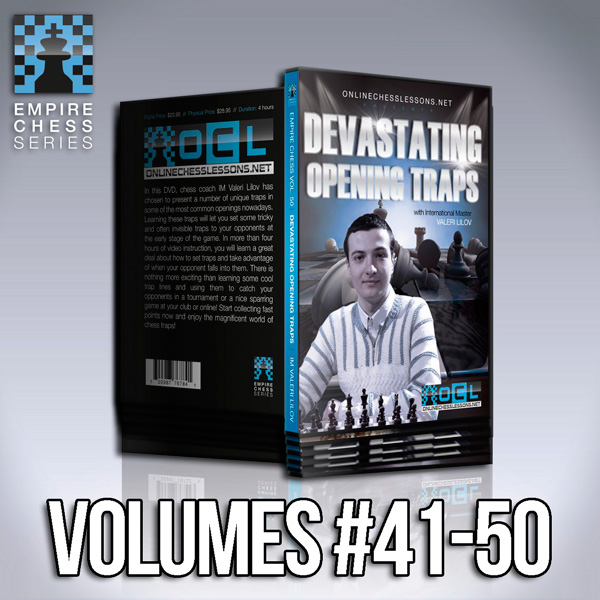 The Empire Chess Series launched explosively in early 2013, revolutionizing chess DVDs throughout the world with a diverse group of popular Grandmasters, innovative topics, and extremely high-quality graphics and editing. OnlineChessLessons.NET is proud to present the Empire Chess Collection (Volumes 41-50) with over 24 hours of elite Grandmaster content at a startling price!

The Empire Chess Series launched explosively in early 2013, revolutionizing chess DVDs throughout the world with a diverse group of popular Grandmasters, innovative topics, and extremely high-quality graphics and editing. OnlineChessLessons.NET is proud to present the Empire Chess Collection (Volumes 41-50) with over 24 hours of elite Grandmaster content at a startling price!

This chess DVD package features several videos by GM Damien Lemos, examining many of the best players of the 21st century and presenting their games accompanied by detailed analysis of their unique playing style. Viewers will learn how these legendary players (Ivanchuk, Grischuk, Svidler, and Morozevich) were able to rise to the top by combining an extremely deep understanding of positional chess, machine-like technique, and thorough opening preparation. This chess video bundle also includes a series on how Grandmasters refute gambits in the opening, presented by renown chess trainer GM Victor Mikhalevski. Viewers will also learn how to fight through difficult endgames via the instruction of the entertaining FM Alisa Melekhina. GM Leonid Kritz explains how 2600 GMs calculate complicated tactical sequences, and IM Valeri Lilov concludes this bundle with a fast-paced course on opening traps intended for beginner and intermediate players.

Grandmaster Damian Lemos utilizes his profound positional understanding and sharp tactical strength to dissect several of Ivanchuk’s best games, explaining exceptionally unique and subtle ideas in Ivanchuk’s play that truly set him apart from other players. This chess DVD will help viewers play more creative and dynamic chess as you will begin to see hidden qualities to candidate moves and plans that you would not have even considered before!

In this chess DVD Grandmaster, Damian Lemos has deeply investigated several of Grischuk’s most impressive victories, explaining how viewers can learn from Grischuk’s versatile playing style. In particular, Grischuk tends to open with 1. e4 so this chess DVD is going to focus more on openings like the Sicilian Defense and the French Defense, as Grandmaster Lemos will explain a few extremely aggressive systems that Grischuk employs with the white pieces.

In this Empire Chess DVD, GM Lemos will demonstrate several critical games in Svidler’s career and show how the Russian Super-GM achieved his most impressive victories to date. And of course, GM Lemos will be explaining several key games by Svidler in the Grunfeld Defense, an opening that Svidler has prepared very deeply and continues to employ with great success on a very frequent basis at the elite level.

In this Empire Chess DVD by Grandmaster Damian Lemos viewers will learn from various incredible examples taken from Morozevich’s games, encouraging viewers to actively develop an initiative and long-lasting, relentless pressure from the very first moves. Upon creating maximum tension against the opponent, viewers will learn how to convert this advantage to a winning endgame – and what Super-GM technique really looks like!

This chess DVD will provide you with all of the necessary knowledge to destroy anyone who tries to catch you off guard with the exceptionally dangerous King´s Gambit starting with 1. e4 e5 2. f4. This chess DVD is truly fascinating as GM Mikhalevski is well-known for his attacking prowess and frequently employing gambits himself, but in ¨How Grandmasters Beat the King’s Gambit¨ he explains how black is able to refute many sidelines with accurate and active play.

In this Empire Chess DVD, the viewers are led through four major principles that can be applied in their own endgames: mentally adapt to a change in the position; resist by preventing your opponent from executing their only winning plan; take advantage of complacency; make your opponent make decisions. Even if a position is theoretically drawn, players should not discount the practical chances that they can create.

In the Empire Chess DVD ¨How Grandmasters Refute Gambits¨ Grandmaster Victor Mikhalevski explains how viewers can dominate with the black pieces against the Scotch Gambit, Goring Gambit, and Danish Gambit. These three gambits can be extremely dangerous if you are caught unprepared, and it is very easy to lose yourself in the complications early in the opening and lose in less than 20 moves! GM Mikhalevski demonstrates how black can convincingly defend himself and fight for a long-term material advantage with conceptually based defensive schemes.

This chess DVD reviews several hours of advanced chess tactics and presents an experienced Grandmaster’s perspective on the thought process associated with identifying possible combinations and accurate calculation; and while it focuses on chess tactics for the advanced player, beginner, and intermediate players will also see a good deal of value in this chess DVD because Grandmaster Kritz explains various problems in a conceptual manner.

In this DVD, chess coach IM Valeri Lilov has chosen to present a number of unique traps in some of the most common openings nowadays. Learning these traps will let you set some tricky and often invisible traps to your opponents at the early stage of the game. In more than four hours of video instruction, you will learn a great deal about how to set traps and take advantage of when your opponent falls into them. There is nothing more exciting than learning some cool trap lines and using them to catch your opponents in a tournament or a nice sparring game at your club or online!