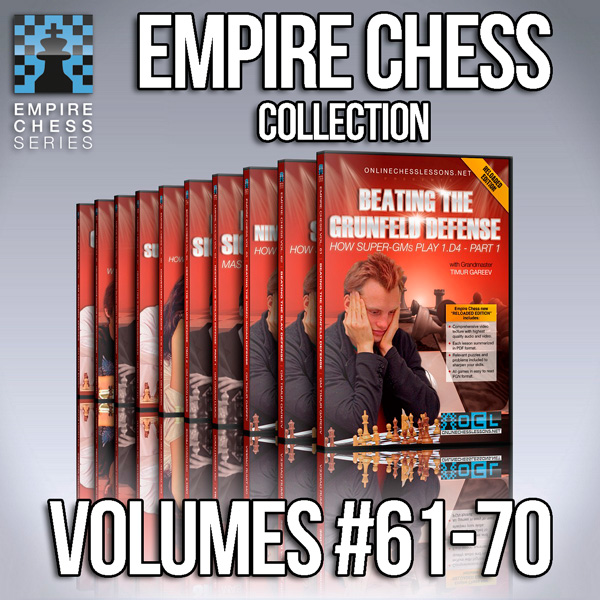 This 10 DVD set contains over 30 hours of premium chess instruction and focuses primarily on developing complete and aggressive opening systems for the white and black pieces. Viewers will learn how to prepare the 1. d4 opening system with the white pieces, presented by one of the strongest Grandmasters currently in the US, GM Timur Gareev at over 2700 USCF!

This 10 DVD set contains over 30 hours of premium chess instruction and focuses primarily on developing complete and aggressive opening systems for the white and black pieces. Viewers will learn how to prepare the 1. d4 opening system with the white pieces, presented by one of the strongest Grandmasters currently in the US, GM Timur Gareev at over 2700 USCF!

Sam Shankland, another one of the top 10 elite Grandmasters in the United States, reviews an old-fashioned system for black against the Ruy Lopez where black plays to win the game immediately in the opening by employing the hyper-aggressive Schliemann Gambit with 1. e4 e5 2. Nf3 Nc6 3. Bb5 f5!?

GM Maxim Dlugy also presents several videos on general themes such as crushing attacks and how you can defend like an experienced Grandmaster.

As part of the Empire Chess Reloaded Edition, you will receive additional training materials including tactics puzzles relevant to the DVD topic to reinforce your understanding of critical concepts, an extended PDF file to explain the key points further in textbook style, and the PGNs for every game covered in the DVD.

This DVD for Intermediate to Advanced Players looks at the variations associated with h4 in the Grunfeld and is termed ‘The Grunfeld Gambit’ by Gareev as he often sacrifices the Pawn with h5.

This DVD by GM Timur Gareev for Intermediate and Advanced players has a detailed look at The 4.Qc2 Nimzo Indian. Timur explains that there is no reason to allow a Queen’s Indian because Black will struggle against this White response and that the Black Nimzo Indian is harmless as the 4.Qc2 move is favored by both Kasparov and Carlsen with excellent results. The ideas for White are supported by extensive analysis – this knowledge will support improvement in all players’ positional understanding and help them to Master the very important area of taming The Nimzo-Indian with the Classical 4.Qc2

This DVD (part 1 of 2) covers Bb5 Systems against The Sicilian Defense with an emphasis on the core White strategies involving immediate and sometimes unprovoked Bxc6! This Anti –Sicilian approach will have opponents frightened to play their favorite Sicilian once the Bb5 Mastery is reached.

This DVD (part 2 of 2) covers Bb5 Systems against The Sicilian Defense with an emphasis on the core White strategies involving immediate and sometimes unprovoked Bxc6! This Anti–Sicilian approach will have opponents frightened to play their favorite Sicilian once the Bb5 Mastery is reached.

The DVD is divided into 4 parts and is presented by FM Alisa Melekhina with an honest look at how she is striving to improve her own ability when ‘Converting Advantages’ like this in the area she has struggled with in the past. The content deals with the critical moments and all of the associated factors that sometimes means we miss the correct course of action when attempting to make our advantage count. Alisa looks at ways to ensure the advantage is converted using a mixture of Psychology, Calculation and correct move searching.

Defend Like a Grandmaster with Maxim Dlugy is an instructional DVD focusing on how to play in difficult and sometimes losing positions. Maxim Dlugy looks at some of the most important games in his career, outlining various techniques in saving bad positions or defending positions where your opponent has the initiative. All the key moments in the games are examined and after watching the video you are ready to save and even win bad positions.

This DVD shows players how to attack like a Grandmaster, presented by GM Maxim Dlugy, he uses examples from Tal and his own games to show techniques and thinking structures to enable excellent attack play. There is coverage of the elements of attack play including How to attack well and avoid pitfalls when attacking; How to find reasons why an attack should be launched; Grandmaster technical ability when attaining the winning position; Mature moves.