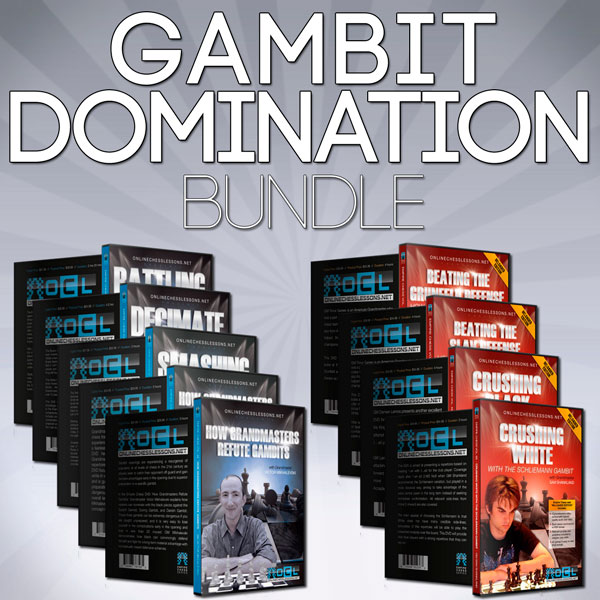 Are you putting enough pressure on your opponent in the opening? Are you winning games in the first 15 moves, or at least gaining a large advantage? Do you ever try an aggressive opening and sacrifice a pawn, only to fall into your opponent’s opening preparation and go straight into an inferior middlegame/endgame?

Are you putting enough pressure on your opponent in the opening?

Are you winning games in the first 15 moves, or at least gaining a large advantage?

Do you ever try an aggressive opening and sacrifice a pawn, only to fall into your opponent’s opening preparation and go straight into an inferior middlegame/endgame?

When is the last time you really evaluated your opening systems and made significant changes? (i.e. improvements!)

I didn’t become a 2500 rated Grandmaster by playing the same openings throughout my entire career as I am constantly re-evaluating my openings and trying to find more aggressive systems. Many of my students have expressed interest in the types of gambits that I like to employ, so I decided to put together a bundle with my recommended opening systems by a variety of other Grandmasters (and a few DVDs I made as well!).

You will find more details below about the 9 Empire Chess DVDs with 30 hours of high-quality chess instruction by a diverse mix of experienced Grandmasters.

This guide is guaranteed to provide you with a comprehensive, well-researched set of chess gambits for all main lines with the white and black pieces!

GM Lemos goes far and beyond the average chess DVD presentation, not focusing on specific move orders but rather making sure that his viewers understand the main ideas behind the moves in the Fianchetto Variation. Viewers are guaranteed to walk away from this DVD with not only a greater understanding of how to beat the Benko Gambit but a greater understanding of positional chess in general. As a 2550 FIDE GM, Damien Lemos bases his high-level play around superior strategic play and deep maneuvers, and in this chess DVD, GM Lemos imparts his positional wisdom with exceptional clarity. ¨Battling the Benko: The Fianchetto Variation¨ examines all of the main lines and sidelines, with optimal plans for white provided in every variation. If you play 1. d4 and consistently struggle against the Benko Gambit, this chess DVD will teach you a complete system to improve your results with white.

If you are considering playing the Evans Gambit, you must understand the basic principles behind this complicated system – black will win material very early in the opening and he will be able to hold this extra material, however white will definitely obtain sufficient compensation in the form of very rapid development and a lasting attack in the center and kingside. If you are looking for a chess opening for white that will grant you excellent winning chances, dynamic positions, and strong attacking prospects – the Evans Gambit will be a perfect fit for your repertoire!

This chess DVD is targeted at beginner and intermediate chess players as GM Har-Zvi first introduces the main concepts of the Smith-Morra Gambit and later delves deeper into concrete variations. GM Har-Zvi also explains common tactical patterns that you should always be aiming for with the white pieces, as black will be facing considerable pressure in the center – especially on the C and D files from white’s active rooks! This chess DVD is guaranteed to improve your results with deep preparation of an explosive gambit against the Sicilian Defense!

Grandmaster Victor Mikhalevski explains how viewers can dominate with the black pieces against the Scotch Gambit, Goring Gambit, and Danish Gambit. These three gambits can be extremely dangerous if you are caught unprepared, and it is very easy to lose yourself in the complications early in the opening and lose in less than 20 moves! GM Mikhalevski demonstrates how black can convincingly defend himself and fight for a long-term material advantage with conceptually based defensive schemes.

GM Timur Gareev is an American Grandmaster who was a part of the University of Texas at Brownsville’s chess team from August 2005 to August 2006 and also from August 2009 to December 2011 where he helped the university obtain its first national championship. This DVD for Intermediate to Advanced Players looks at the variations associated with h4 in the Grunfeld and is termed ‘The Grunfeld Gambit’ by Gareev as he often sacrifices the Pawn with h5.