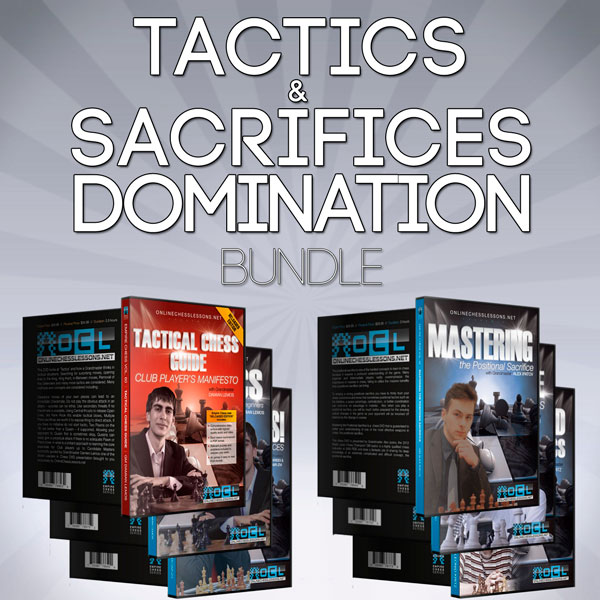 Becoming a Grandmaster takes several years of constant training and re-evaluation of your strengths and weaknesses to adjust your strategy to achieve consistently better results. However in my new Empire Chess Tactics and Sacrifices Domination Bundle I am going to share a secret with you that helped me raise my rating by 350 points. It didn’t happen overnight, I had to work very hard and perform well in high-pressure situations to achieve all 3 GM norms.

Becoming a Grandmaster takes several years of constant training and re-evaluation of your strengths and weaknesses to adjust your strategy to achieve consistently better results. However, in my new Empire Chess Tactics and Sacrifices Domination Bundle, I am going to share a secret with you that helped me raise my rating by 350 points. It didn’t happen overnight, I had to work very hard and perform well in high-pressure situations to achieve all 3 GM norms.

But there was one thing that really helped me achieve rapid improvement: I devoted a LOT of study time for tactics and sacrifices.

So if you are serious about getting better at chess, you need to take a look at how strong you are tactical. How accurate is your combinational vision? If you want to find out, you need to get this new cutting edge course that combines different perspectives on tactics and sacrifices with several Grandmasters sharing their unique approaches to extremely rapid improvement in these two critical areas!

This chess DVD will teach you the basics of tactics and how to start winning more games immediately. Intended for the beginner and intermediate audience, GM Damian Lemos produced ¨Chess Tactics of the Grandmasters¨ to explain to less experienced players that you must constantly be attentive to the tactical demands of any position. This comprehensive chess DVD will teach you how to apply this fundamental principle in your games to stun your opponents and never leave yourself undefended!

Understanding the many types of sacrifices, and what types of positions are good to sacrifice from, is critical if you want to improve your game. In this chess DVD, Grandmasters Timur Gareev (2680 FIDE) and Ronen Har-Zvi (2515 FIDE) explain particularly impressive sacrifices by leading GMs Judit Polgar, Emil Sutovsky, Hikaru Nakamura, Dragoljub Velimirović, and Artur Yusupov.

This is a comprehensive chess DVD that is guaranteed to better your understanding of one of the most effective weapons in chess. This chess DVD is presented by Grandmaster Alex Ipatov, a highly qualified 2590 FIDE chess instructor who does a fantastic job of sharing his deep knowledge of an extremely complicated and difficult concept – the positional sacrifice.

In this 3-hour chess DVD by experienced Grandmaster Rafael Leitão, viewers will learn how elite players view chess tactics in the middlegame. Even if you are more of a positional player, in many games you will still have to employ forcing moves with direct tactical repercussions to achieve long-term, comprehensive positional gain.

This chess video focuses on chess tactics for the advanced player, however, beginner and intermediate players will also see a good deal of value in this chess DVD because Grandmaster Kritz explains various problems in a conceptual manner.

This DVD looks at ‘Tactics’ and how a Grandmaster thinks in tactical situations. Searching for surprising moves, opening lines to the King, King Hunt, In-Between moves, Removal of Key Defenders and many more tactics.