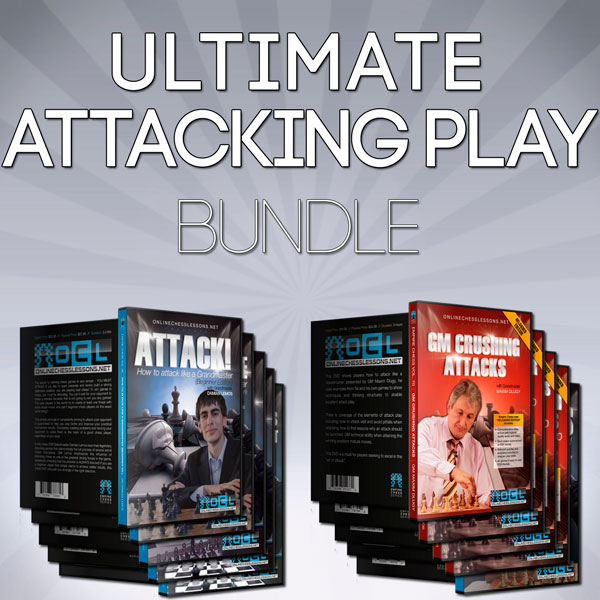 Have you ever felt like you are just stuck at the same level in chess? You are still studying, training, and going to good tournaments but you can’t seem to win more games, this is typical for chess players of all levels. You wouldn’t believe how common this problem is!

I had the same problem earlier in my chess career. I got stuck in the expert class, I just could not manage to break through to the candidate master rating. No matter how much I studied, no matter how hard I concentrated during my games, I just could not win won games, and I found myself losing games that I should have won, or worst case scenario, drawn.

The problem was that I wasn’t playing attacking chess. I was moving the pieces, but I wasn’t creating a threat with every single move. I was trying to put pressure on my opponent, but I wasn’t looking for the instant knockout shots.

Is this happening in your games? If you want to have better results, then you need to try my new collection of courses specifically for players like you. This series will help you play a more accurate, aggressive chess and will teach you the secrets you need to break through your current level using attacking chess.

Daniel Naroditsky explains the secret of how he became a Grandmaster at only 17 years old using aggressive attacking play.
The secret to completely neutralizing any club level player who plays equally aggressively.

The quickest path for any club player to begin playing aggressively without memorizing hundreds of positions.
The biggest difference between true “airtight” aggressive play vs positionally shallow attacks.

Dozens of practice problems and relevant puzzles and lesson summaries in PDF form (for 4 out of 10 of the volumes)
The highest quality audio and video quality possible. Patiently crafted and edited by the OnlineChessLessons.NET team for an optimal chess learning experience.

What will you learn?