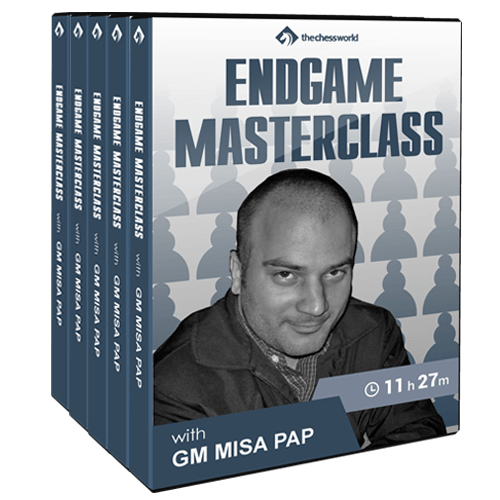 You see, endgames are tough to handle unless you know these little nuances and tricks—that’s why you need GM Misa Pap’s brand-new Endgame Masterclass.

After about 40 moves, you realize your opponent is not really that weak as you thought. Pieces are getting exchanged, one by one. Until you reach the endgame…

And that’s when it happened. You suddenly realized that you have put all your pawns in the same colored squares as your opponent’s bishop, while your opponent did the opposite. Ouch!

In the next few moves, the game is over. You resign out of sheer disgust.

You see, endgames are tough to handle unless you know these little nuances and tricks—that’s why you need GM Misa Pap’s brand-new Endgame Masterclass.

An 11-hour long masterpiece, like none other, that tells you how to win endgames ON DEMAND. Period.

Whether it is a pawn endgame or a queen endgame, Misa tackles the different endgames individually in separate chapters. Broken down in easily digestible formats.

Endgames are important, and I mean, SUPER IMPORTANT!

You can play a perfect game only to lose in the last couple of moves. You don’t want that, right?

Is a self-made Serbian Grandmaster. He is a winner of 16 international tournaments with 2600+ performance, former youth Champion of Yugoslavia and 3-times Champion of Vojvodina. GM Pap is a regular participant of the European Chess League and has over 15 years of coaching experience. He is also a regular contributor to Chess Informant.

★★★★★
Tommy G. (Jul 23, 2021)
Deep dive into many fundamental and advanced endgame concepts such as King and Pawn endgames, minor piece endgames, rook endgames, etc. etc. Good treatment of positions for various levels of difficulty and skill level. The course will be perfect for any players from 1400 to 2300 elo. It’s nearly 12 hours and structured into 10 full length lessons. I would recommend studying one chapter a day and in short 10 days you will have much better understanding of endgame strategy and principles.
Add a review