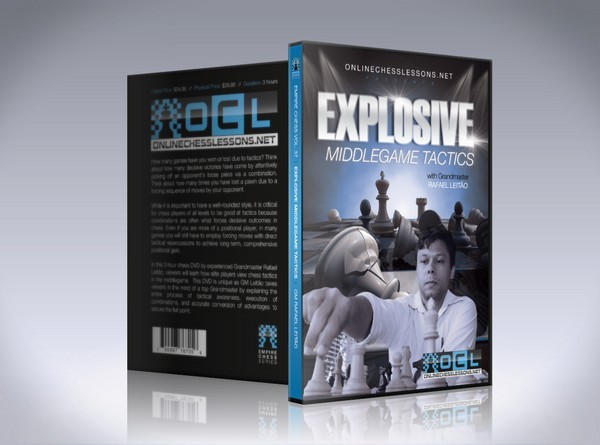 This DVD is unique as GM Leitão takes viewers in the mind of a top Grandmaster by explaining the entire process of tactical awareness, execution of combinations, and accurate conversion of advantages to secure the full point.

How many games have you won or lost due to tactics? Think about how many decisive victories have come by attentively picking off an opponent’s loose piece via a combination. Think about how many times you have lost a pawn due to a forcing sequence of moves by your opponent. While it is important to have a well-rounded style, it is critical for chess players of all levels to be good at tactics because combinations are often what forces decisive outcomes in chess. Even if you are more of a positional player, in many games you will still have to employ forcing moves with direct tactical repercussions to achieve long-term, comprehensive positional gain. In this 3-hour chess DVD by experienced Grandmaster Rafael Leitão, viewers will learn how elite players view chess tactics in the middlegame.

At 2635 FIDE, GM Rafael Leitão is one of the best players in South America and frequently enjoys success at international competitions. Rafael has played chess professionally for over 15 years and is extremely effective as a presenter due to the ability to express complicated ideas in a very clear and understandable way. This DVD is unique as GM Leitão takes viewers in the mind of a top Grandmaster by explaining the entire process of tactical awareness, execution of combinations, and accurate conversion of advantages to secure the full point.