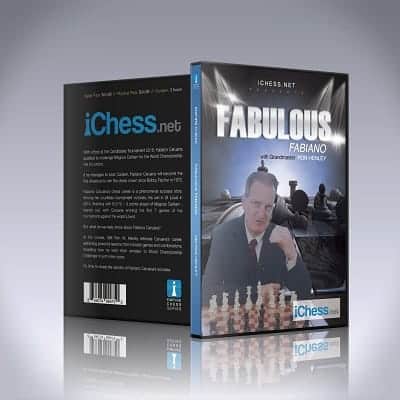 0 Review(s) (0)
$24.99
In this course, GM Ron W. Henley retraces Caruana’s career, extracting powerful lessons from his best games and combinations, revealing how he went from amateur to World Championship challenger in just a few years.
Add To Cart
About the Course Additional Information Reviews (0)
Product Description

With his victory at the Candidate’s Tournament 2018, Fabiano Caruana qualified to challenge Magnus Carlsen for the World Championship title in London.

Fabiano Caruana’s chess career is a phenomenal success story. Among his countless tournament victories, his win in St Louis in 2014, finishing with 8.5/10 – 3 points ahead of Magnus Carlsen – stands out, with Caruana winning the first 7 games of the tournament against the world’s best.

But what do we really know about Fabiano Caruana? In this course, GM Ron W. Henley retraces Caruana’s career, extracting powerful lessons from his best games and combinations, revealing how he went from amateur to World Championship challenger in just a few years.

It’s time to reveal the secrets of Fabiano Caruana’s success.

Italian-American Fabiano Caruana went from playing amateur tournaments to being the 3rd highest-rated player of all-time in just 5 years.

What chess-playing secrets hold the key to Caruana’s incredible rise?

Recorded just before Fabiano’s historic World Championship match against Magnus Carlsen, GM Ron Henley seeks to answer this question with an expert analysis of 10 of Caruana’s most instructive games.

Here’s part of what  you’ll learn with this 3-hour course:

When Fabiano Caruana was younger, he was a feared attacking player.

Even in apparently calm lines, he found ways to go for an attack against the opponent’s king. In the course, GM Henley takes a look at a game Fabiano Caruana played back in 2008, aged 16.

Playing with the White pieces, he faced the French Defense Rubinstein Variation (1.e4 e6 2.d4 d5 3.Nc3 dxe4) which has the reputation of being very solid, leading to calm positions. Yet, Caruana managed to create an impressive attack.

Many average club players like to play very solidly and aim to avoid different types of material imbalances. This is a bad habit that prevents club players from reaching their full potential.

You will learn how Caruana sets up dynamic imbalances with surprising sacrifices that allow him to play for the win.

You’ll see how to generate powerful kingside attacks, keeping the pressure on even if your opponent manages to trade some material off.

And you will discover the endgame magic that has helped Caruana get the full points that his winner mentality demands.

GM Ron Henley helps you understand Caruana’s chess… and improves your game at the same time.