How To Beat the King’s Indian Defense – IM Nazi Paikidze 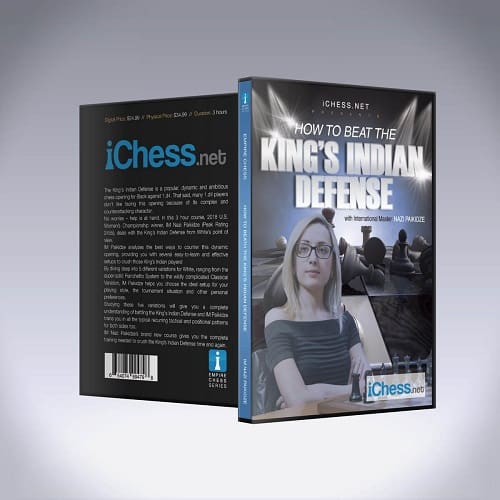 How To Beat the King’s Indian Defense – IM Nazi Paikidze

The King‘s Indian Defense is a popular and ambitious chess opening for Black against 1.d4. Many 1.d4 players don’t like facing this opening because of its complex and counterattacking character.

No worries – help is at hand. In this 3 hour course, 2018 U.S. Women’s Chess Champion, IM Nazi Paikidze (Peak Rating 2455), deals with the King’s Indian Defense from White’s point of view.

IM Paikidze analyzes the best ways to counter this dynamic opening, providing you with several easy-to-learn and effective setups to crush those King’s Indian players!

By diving deep into 5 different variations for White, ranging from the super-solid Fianchetto System to the wildly complicated Classical Variation, IM Paikidze helps you choose the ideal setup for your playing style, the tournament situation, and other personal preferences.

Studying these five variations will give you a complete understanding of battling the King’s Indian Defense and IM Paikidze trains you in all the typical recurring tactical and positional patterns for both sides.

Nazí Paikidze (aka Nazí Paikidze-Barnes) is is a Georgian-American chess player who holds the titles of International Master and Woman Grandmaster (WGM).

The King’s Indian Defense is a chess opening for Black against 1.d4 and occurs after the moves 1.d4 Nf6 2.c4 g6 3.Nc3 Bg7. You can see this position in the diagram below.

From club players to Super-GMs like Hikaru Nakamura and Teimour Radjabov, you regularly see this opening arising on the chess board.

The great Garry Kasparov even used it in 2017’s Ultimate Blitz event against Fabiano Caruana, Hikaru Nakamura, and Wesley So.

If you want to counter this opening with success as White, you first of all need to understand the main ideas of Black’s setup.

It is key to understand that the King’s Indian Defense is a hypermodern opening.

Black does not try to control the center early on with his pawns but spends time fianchettoing his dark-squared bishop and only later attacks the center with his pieces.

To put it into a simple formula: Black first leaves the center to White and then tries to conquer it with his superior development.

Generally speaking, the Four Pawns Attack leads to sharp tactical play and wild positions. It suits White players who like to play aggressively and go for the full point at all costs.

The Saemisch Variation occurs after the moves 1.d4 Nf6 2.c4 g6 3.Nc3 Bg7 4.e4 d6 5.f3. It’s not as aggressive as the Four Pawns Attack as White strengthens the e4-pawn with the move f2-f3, creating a solid central pawn chain.

The main downside of this setup is that the move f2-f3 takes away the f3-square from the knight on g1. On the flip side, White gets a very solid position. The great thing about the Saemisch Variation is that White decides when he expands in the center. He can prepare himself first for this central advance.

The Fianchetto Variation is one of the most solid choices for White against the King’s Indian Defense. Positional players who don’t want to be confronted with Black’s usual kingside pawn storm will like this variation.

White does not need to study too much theory to play this variation and can rely on general concepts and positional/strategic ideas.

It occurs after the moves 1.d4 Nf6 2.c4 g6 3.g3 Bg7 4.Bg2 0-0 5.Nf3 d6 6.Nc3. With IM Paikidze’s recommendations, White can get a slightly better position in these structures. He not only has more space to maneuver his pieces but also the possibility to expand on the kingside.

The Classical Variation owns its name for a reason. This variation has been debated for many decades and there are thousands and thousands of games that have been played in this line. If you’re interested in chess history and the development of a variation, this line is for you.

The Classical Variation occurs after the moves 1.d4 Nf6 2.c4 g6 3.Nc3 Bg7 4.e4 d6 5.Nf3 0-0 6.Be2.Black aims to launch an attack on the kingside. White, in contrast, creates counter-play on the queenside. White tries to enter Black’s camp before Black can succeed with his kingside play. Generally speaking, there is a lot of theory in all these lines and play is very sharp and double-edged.

The Makogonov Variation arises after the moves 1.d4 Nf6 2.c4 g6 3.Nc3 Bg7 4.e4 d6 5.Nf3 0-0 6.h3. In the Makogonov Variation, White often delays the development of the kingside. The light-squared bishop on f1 is well-placed if Black comes up with an early …Nf6-h5-f4 maneuver as White can simply push the knight back from f4 with g2-g3. The White king on e1 stays flexible. White sometimes castles kingside, he sometimes castles queenside and he sometimes leaves his king in the center.

In the course, IM Nazi Paikidze explains how to navigate through the jungle of variations in all the sidelines. There are several recurring patterns and ideas which will help you to play the right moves even if you forget the concrete theory.