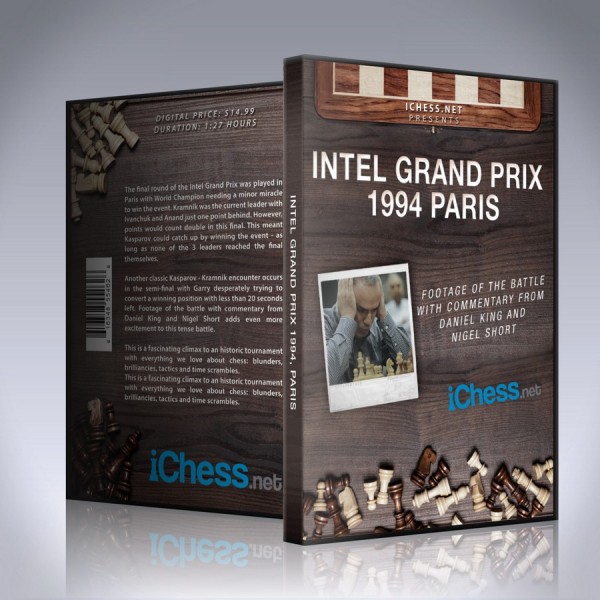 The final round was played in Paris with World Champion needing a minor miracle to win the Intel Grand Prix Paris 1994. Kramnik was the current leader with Ivanchuk and Anand just one point behind.

The final round was played in Paris with World Champion needing a minor miracle to win the Intel Grand Prix Paris 1994. Kramnik was the current leader with Ivanchuk and Anand just one point behind.

However, points would count double in this final. This meant Kasparov could catch up by winning the event – as long as none of the 3 leaders reached the final themselves.

An amazing game occurs in round 1 with Anand being surprised by some amazing early tactics from Russian GM Anatoli Vaisser. Other notable games include a smooth and instructive win as Black by Nikolic, playing the French Tarrasch and a frantic endgame between Kramnik and Vyzmanavin in which the latter agonizingly blunders by trading down from a fortress to a lost King and pawn endgame.

Another classic Kasparov – Kramnik encounter occurs in the semi-final with Garry desperately trying to convert a winning position with less than 20 seconds left. Footage of the battle with commentary from Daniel King and Nigel Short adds even more excitement to this tense battle.

This is a fascinating climax to a historic tournament with everything we love about chess: blunders, brilliancies, tactics and time scrambles.