Learn to Play Like Mikhail Botvinnik with GM Marian Petrov 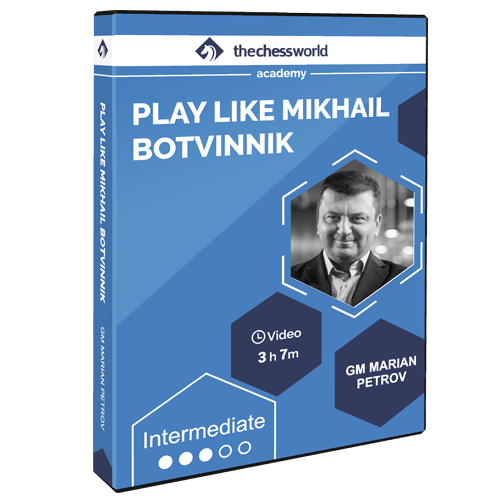 In this 3-hour video training, GM Marian Petrov demonstrates how he took super-aggressive opponents into an uncomfortable strategic playground and super-positional opponents through a tactical rollercoaster ride.

He stayed at or near the top for THIRTY years!

…from 1933, when he drew a match against Flohr, to 1963, when he lost his world champion title to Petrosian.

A feat equaled historically only by Emanuel Lasker and Wilhelm Steinitz—and that made him one of the GREATEST players of all time.

Mikhail Botvinnik’s playing style was strategically forceful. He did not engage in a berserk piece sacrifice or any unsound tactical combination only to put pressure on his opponent. What he did instead was slowly outplayed him with a superior strategy until he cracked like an egg.

Meticulous preparation was his strong point, and it showed in his games. As a computer engineer and scientist, he played moves that not only conformed to a predetermined structure but also followed unflawed logical reasoning, tieing one move t the next.

If you want to be a logical chess player, studying Botvinnik’s games is a MUST.

How better it would be if a grandmaster commentates on those games and explains the moves to you, right?

This 3-hour video training demonstrates how he took super-aggressive opponents into an uncomfortable strategic playground and super-positional opponents through a tactical rollercoaster ride.

You have got no choice.

Strategy is something that distinguishes a pro from an amateur. If you think practicing tactical puzzles for 5 hours a day will take you beyond to the advanced level, no, it’s not.

As your opponents become stronger and stronger, you need to understand how to create those positions first from where the tactics flow. These opponents won’t make it easy for you.

How do you do it then? That’s where studying the games of strategic geniuses come in. Especially the ones of Petrosian, Capablanca and of course, BOTVINNIK!

That’s why you absolutely need this course. No exception.