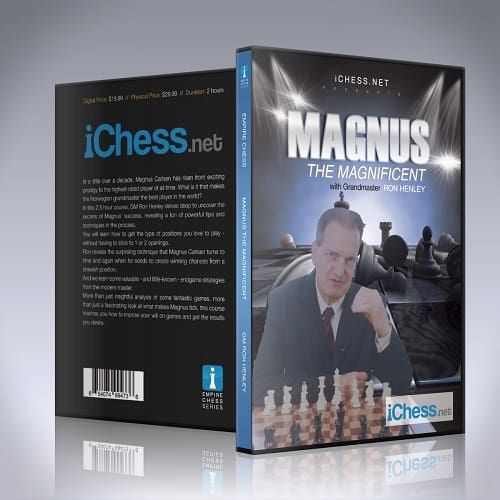 In this 2.5 hour course, GM Ron Henley delves deep to uncover the secrets of Magnus’ success, revealing a ton of powerful tips and techniques in the process. You will learn how to get the type of positions you love to play – without having to stick to 1 or 2 openings.

In a little over a decade, Magnus Carlsen has risen from an exciting prodigy to the highest-rated player of all-time.

What is it that makes the Norwegian grandmaster the best player in the world?

In this 2.5 hour course, GM Ron Henley delves deep to uncover the secrets of Magnus’ success, revealing a ton of powerful tips and techniques in the process.

You will learn how to get the type of positions you love to play – without having to stick to 1 or 2 openings.

Ron reveals the surprising technique that Magnus Carlsen turns to time and again when he needs to create winning chances from a drawish position.

And we learn some valuable – and little-known – endgame strategies from the modern master.

More than just insightful analysis of some fantastic games, more than just a fascinating look at what makes Magnus tick, this course teaches you how to impose your will on your own opponents to get the results you desire.

How is this going to help me?

In this course, GM Ron W. Henley uncovers the secrets behind Magnus Carlsen’s remarkable success, examining his career and explaining the chess secrets hidden in his games.

Magnus Carlsen is a chess phenomenon. Grandmaster at 13 years old, he cleared 2800 Elo just 5 years later and became world No. 1 the following year.

In 2013, Carlsen defeated Anand to become the new World Chess Champion and successfully defended his title against Anand in 2014, Karjakin in 2016 and Caruana in 2018.

Every chess player knows that some chess moves are harder to spot than others: backward moves, horizontal moves, moving a piece to an apparently protected square, quiet moves in sharp positions, positionally undesirable moves and so on. Moves like these don’t easily enter our minds.

Magnus is very good at spotting these subtle hidden moves in his games. In his game against Geir Sune Tallaksen Ostmoe from 2005, for example, Magnus went all in for a kingside attack and sacrificed a rook and a piece for a strong attack (see the chessboard image on the right).

We already know that Magnus Carlsen isn’t a materialistic player at all. He sacrifices material in many situations. Yet, it’s interesting to observe that very often Magnus is in no rush to recover his sacrificed material, but instead continues to mobilize his forces.

GM Ron Henley calls this the concept of “delayed gratification”. Magnus knows that piece activity usually outweighs material. One of his key strengths is to play with compensation when being material down.

This is a unique chance to learn about Magnus Carlsen’s playing style, his strengths, and weaknesses, how he approaches the openings plus the techniques he uses to outplay his opponents from seemingly drawn positions.