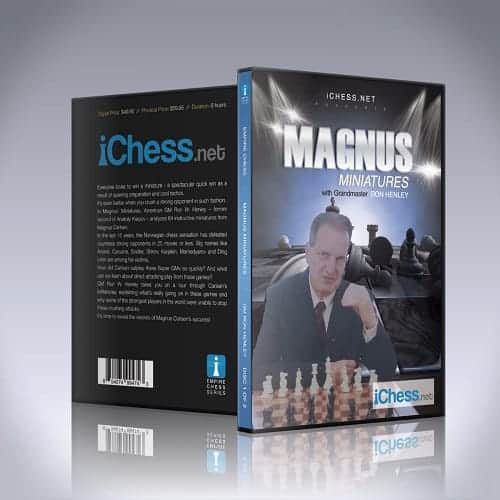 Everyone loves to win a miniature – a spectacular quick win as a result of opening preparation and cool tactics. It’s even better when you crush a strong opponent in such a fashion.

In the last 15 years, the Norwegian chess sensation has defeated countless strong opponents in 25 moves or less. Big names like Anand, Caruana, Svidler, Shirov, Karjakin, Mamedyarov and Ding Liren are among his victims.

How did Carlsen outplay these Super GMs so quickly? And what can we learn about a direct attacking play from these games?

In this course, GM Ron W. Henley has seized the chance to explore the talents of the “Mozart of chess” with a very unique format. GM Ron W. Henley takes you on a tour through Magnus Carlsen’s brilliancies by looking at 64 of his miniatures.

The great thing about this course is that Magnus’ miniatures aren’t only entertaining, but they also have an instructive value for chess improvement.

By going through all these quick wins by Magnus, GM Ron W. Henley investigates the secrets of the games played by Magnus Carlsen, extracts powerful lessons for our own game, and reveals how Magnus Carlsen manages to outplay so many strong players in quick fashion.

Here’s part of you’ll learn with this course:

If you want to win many games in 25 moves or less, you definitely need to have a killer instinct at the chessboard. Your tactical brain needs to be in good shape and – once you have the initiative – you constantly need to look for knockout punches that finish the game immediately.

Studying Magnus’ miniatures, it becomes clear that once Magnus has his opponents on the ropes, he doesn’t let them off the hook.

In the position at hand, Magnus, playing Black, has a knockout punch at hand. His opponent just played 23.e4, trying to free his piece and attacking Black’s knight on d5.

However, Magnus counters with the stunning 23…Ne3!, forking White’s queen and rook. The point is that 24.Qxe6 loses to 24…Rxd1 mate. After 24.Rxd8+ Rxd8 25.Qe2 (securing the queen), Magnus continued with another brilliant move to finish his opponent off – 25…Qc4+!! (see the diagram below).

Not only did Magnus Carlsen win his miniatures for tactical reasons, but he also outplayed some of his opponents for positional reasons. Although Magnus plays plenty of different openings, he usually shows a high-level understanding of the strategic and positional plans.

A good example of his superb positional understanding – already at a very young age – is his game against Falko Bindrich from the U12 World Championship in 2002, which Henley will also analyze during the course.

GM Ron W. Henley takes you on a tour through Carlsen’s brilliancies, explaining what’s really going on in these games and why some of the strongest players in the world were unable to stop these crushing attacks.

It’s time to reveal the secrets of Magnus Carlsen’s success!