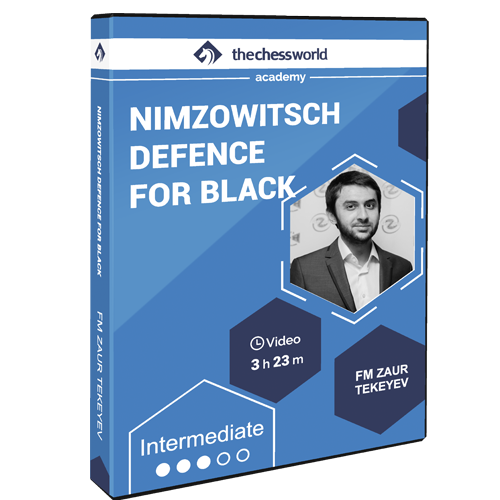 2 Review(s) (5.00)
$39.00
This course teaches you how to forge the 1...Nc6! move as a dangerous weapon against White’s 1.e4… by not letting him go into an ordinary 1.e4 variation like the Italian or the Scotch. If done right, Black can end up with a winning opening advantage.
Add To Cart
About the Course Additional Information Reviews (2)
Product Description

They do not play this opening at the highest level that much.

Though Carlsen played it twice against Ding and Nepomniatchi in the Magnus Carlsen Invitational last year, and also against Aronian in the Clutch Chess Int’l 2020…

Top-level players like Fedoseev, Inđić, and Bauer have also been regular players of this line.

Yet let’s just say… it is more commonly seen in a rapid or a blitz game—especially when Black needs to play for a win.

The opening is not that well studied and your opponent might quickly be drawn into uneven lands where you have the higher ground and lots of firepower over the board.

The Nimzowitsch Defense packs a punch of surprise right in the opening but has also got a misplaced knight on c6 in most cases.

Your opponent will try to exploit that and you need to know how to steer the game towards a direction where your c6-knight is not a weakness but an unquestionable dominating piece.

This course teaches you how to forge the 1…Nc6! move as a dangerous weapon against White’s 1.e4… by not letting him go into an ordinary 1.e4 variation like the Italian or the Scotch. If done right, Black can end up with a winning opening advantage.

If you play Black ever in your chess games and your opening needs to have a shock value, this is for you.

Especially if it is a game with faster time control, as with online tournaments these days.

This opening is relatively unexplored—at least not widely studied like the Sicilian or the Central Game—and will definitely help you secure a few full points and add points to your rating.

Also, you need a line with less theory when you want to have fun and still win, right? This opening fits the bill for those occasions.

Is a FIDE Master with one International Master norm. Zaur has been coaching chess players of different ages and levels for many years. As a player, he has won multiple tournaments, one of the best results being the 1st place in Russian National Students’ Chess League Championship (Moscow Open, 2017). Zaur is also a big online blitz player, with online rating of over 2800.