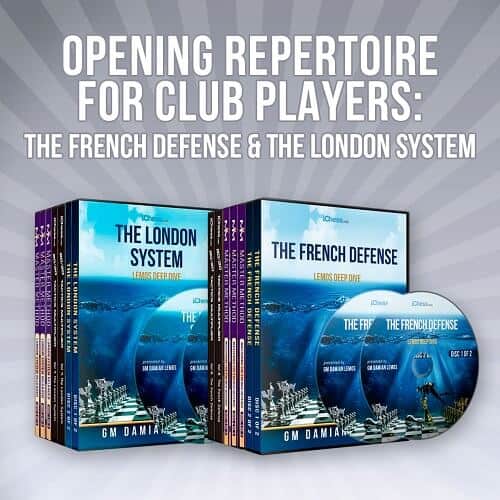 Today we present to you a super collection of high-quality chess videos on two of the best chess openings that you can always rely on: The London System and The French Defense.

The Club Players Repertoire: The French Defense & The London System

If you want to move up to master level in chess, there comes a time when you must start building an opening repertoire.

Today we present to you a super collection of high-quality chess videos on two of the best chess openings that you can always rely on: The London System and The French Defense.

Don’t waste time learning some strange off-beat opening you’ll have to change in a couple of years. Why do all the work twice? The French Defense and the London System are openings that will last you your entire chess life – solid openings that don’t require endless memorization or weekly theoretical updates!

With this bundle, you get 63 hours of highly instructive chess content, fully dedicated to teaching you the strategic ideas of the French Defense and the London System, as well as the tactical patterns that you should always be aware of.

The London System is a chess opening for White that usually starts with the moves 1.d4 and 2.Bf4 (or 2.Nf3 first, followed by 3.Bf4) by White.

This flexible chess opening is a weapon that you can use against virtually any Black defense and has a smaller body of theory than many other openings.

The London System is a chess opening for White that begins with the move 1.d4, but doesn’t continue with the Queen’s Gambit. It normally results in a closed game.

This makes it the perfect choice for busy club players who prefer to understand key strategic and tactical ideas instead of having to memorize an endless number of theoretical variations.

For a long time, the London System was considered to be a dry and boring opening, used by players who just wanted to get a playable position out of the opening. Nowadays, thanks to developments in theory, it has become a popular choice for club players and top-level grandmasters alike due to the winning chances it offers. The three London System courses you get in this bundle perfectly complement each other. Start with the Deep Dive course and you’ll be introduced to the general ideas and plans with GM Damian Lemos. GM Ron Henley’s Master Method then takes your repertoire to the next level, looking at all the different setups you’ll face and making sure you’re set even against the toughest opposition. IM Eric Rosen will show you all the killer tactics that you’ll find at your fingertips once you start playing the London System in your own games.

In the modern days, Wesley So, Ding Liren and Alexander Grischuk all rely on the French Defense as one of their major opening weapons.

If you’re looking for a reliable chess opening for Black against 1.e4, here are several reasons why you should consider playing the French Defense:

First of all, the French Defense is considered to be one of the most successful openings and has an excellent score in chess databases. That means that by playing it, you are automatically maximizing your winning chances statistically.

Secondly, playing the French Defense can be a vital alternative for all Black players who are tired of repeatedly entering the highly theoretical terrain of all the absolute main lines such as the sharp Open Sicilians or the Ruy Lopez.

You will learn grandmaster strategies that will turn your initial cramped position into total domination of the board, plus discover sneak ways to lure your rivals into tempting but deadly traps that give you quick wins.

Again, start with the Deep Dive course with GM Damian Lemos who will show you the key plans and ideas you need to be aware of. Then, GM Fabien Libiszewski’s 17 hour Master Method is the most comprehensive French Defense course out there and teaches you how to counter all of White’s setups from the main lines to the dangerous gambits and offbeat deviations, giving you a bulletproof repertoire. GM Mihail Marin takes 8 hours to show you the multitude of amazing tactics at your disposal in this dynamic opening – and tactics win games!

How do I benefit from this?

If you are a serious chess player, you need an opening repertoire that you can always rely on. You need a repertoire that helps you steer the game in a direction you are familiar with, where you know the tactics, plans, and middlegame strategies.

A clever opening system for the White pieces that even top players like Kramnik turned to, The London System is definitely one of the best chess openings for White that you can play.

GM Ron W. Henley, GM Damian Lemos, and IM Eric Rosen will show you that the London System is an underestimated opening system – even if it has become fashionable nowadays. More and more top players include it in their repertoire.

The material in this bundle is designed to give you the best return on your training time by hitting 3 areas at once:

Here are the London System courses included in this bundle:

Also, for the Black pieces, you must have a weapon against 1.e4. Thanks to the asymmetrical pawn structure which arises from most variations, the French Defense is an excellent opening to play when you’re looking for a win with the black pieces.

Here are the French Defense courses included in this bundle:

We’ve put this bundle together in order to help you arm yourself with two opening systems that you can always rely on.

Get trained by the world’s leading experts in these two opening systems and you’ll be ready to start dominating your opponents with superior opening knowledge and more comfortable middlegame positions.