Play 4. f3 Against the Nimzo-Indian Defense with GM Jacek Stopa 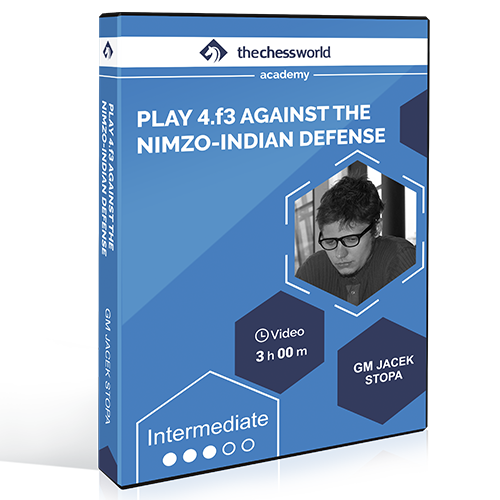 In this course, GM Jacek Stopa will guide you through the ins and outs of the theory and planning within the 4. f3 line.

One of White’s first and biggest struggles in chess is maintaining his/her advantage against solid defenses like the Nimzo-Indian.

Sometimes, it can get difficult to ensure that threats and attacks are limited while trying to checkmate.

That’s why we present to you GM Jacek Stopa’s lesser-known weapon that you can masterfully learn to use in your games.

If you are looking for efficient ways to put Black out of his/her comfort zone, look no further than GM Stopa’s legendary series on using one of the sharpest, attacking variations to counter Black in the Nimzo-Indian Defence: 4. f3 also known as the Kmoch Variation.

With all of Stopa’s easy-to-use techniques and detailed theory, you will be more than ready to put Black out of his/her comfort zone!

In this course, GM Jacek Stopa will guide you through the ins and outs of the theory and planning within the 4. f3 line. Specifically, he will cover the following:

Once you have completed this course, you will have more than enough knowledge to implement the spicy ideas of the 4. f3 variation in your own games.

To add, you will have an in-depth view of Black’s thinking, and how you can surprise your opponent in your next match!