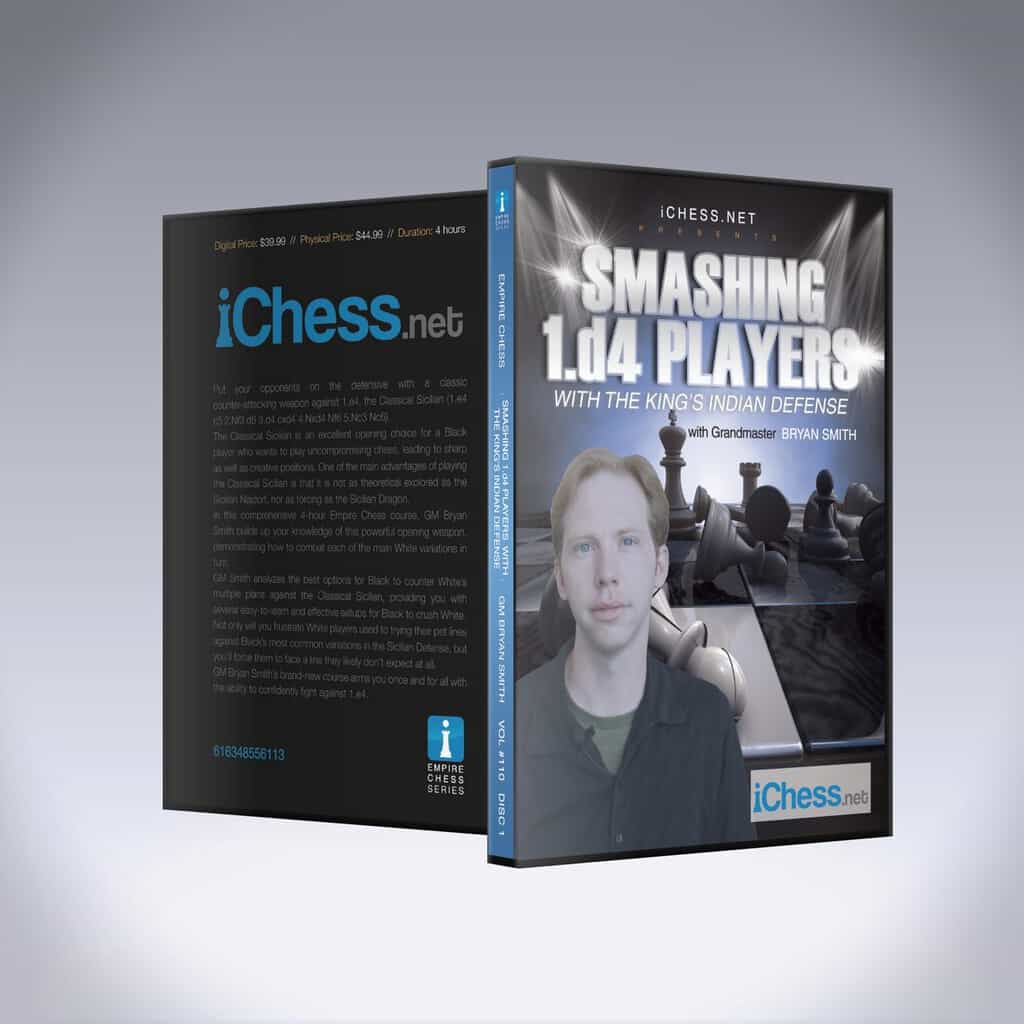 The King’s Indian Defense is a dynamic attacking response to 1.d4 and was favored by historical legends such as Bronstein, Fischer, Tal, and Kasparov.

The King’s Indian Defense is a dynamic attacking response to 1.d4 and was favored by historical legends such as Bronstein, Fischer, Tal, and Kasparov.

In a counterintuitive approach, you’ll happily allow white to occupy the center with a massive pawn wall, only to target it later with your own pawn strikes that blow open the position to your benefit.

The best thing is that when playing this opening, you’ll attack with all the aggression you feel necessary, and score your black wins via devastating piece sacrifices, pawn storms and kingside invasions that lead to fast checkmates.

In a word: there is never a boring game!

In this course, Grandmaster Bryan Smith reveals how you can use this opening to storm the enemy king, fend off and swat away white’s positional squeeze play and win your games in brilliant style.

And to assure that you’re fully prepared and armed to the teeth, GM Smith covers ALL modern theory in detail, provides detailed strategic plans, reveals the typical piece sacrifices and even shares the “spirit” you should play your games in.

In this comprehensive 4-hour Empire Chess course, GM Bryan Smith shares with you the know-how of the KID, preparing you to parry each of the possible plans from white.

Here’s what you’ll learn with this course:

You will see that black’s strong position is more than enough to stop these futile attempts.

When playing on the flanks, we have to be careful our opponent doesn’t have dangerous counterplay in the center. That’s why we will only attempt attacks on the flank after the center has been blocked or stabilized. GM Bryan Smith will show you when and how!

Don’t fall into the temptation of a premature attack that will leave you with passive and inferior positions.

How to Parry White’s Diverse Plans and Ideas

As a defense that has been present in professional practice for so long, it’s not strange that white has tried in many different ways to find a weak spot in the King’s Indian Defense. But don’t worry! The KID is here to stay in your repertoire forever! You just have to learn the fine details and differences in each of the different lines that White plays, such as The Classical, The Samisch, The Averbakh, 6.h3 systems, the Four Pawns Attack, Fianchetto lines, Smyslov System, etc… all of which are covered in this course.

And like most of our courses, you’ll also get Complete PGN file of all covered games/examples, Challenging Puzzles for testing your knowledge, plus, a Comprehensive Summary PDF that’ll be your reference guide and blueprint for the course.

GM Bryan Smith’s course arms you once and for all to confidently fight against 1.d4 players.