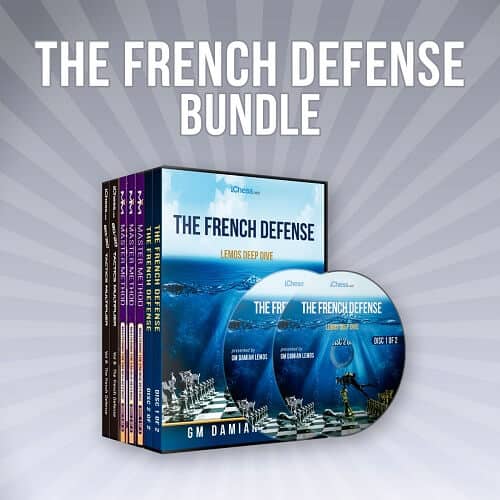 Today, Wesley So, Ding Liren and Alexander Grischuk all rely on the French Defense as one of their major opening weapons.

You get 32 hours of very rich and deep content, fully dedicated to teaching you the strategic ideas of the French Defense, and also the tactical patterns that you should be aware of so that there’s no way your opponent can surprise you in this opening.

You will learn grandmaster strategies that will turn your initial cramped position into total domination of the board, plus discover sneaky ways to lure your rivals into tempting but deadly traps that give you quick wins.

The Complete French Defense Bundle works perfectly as both a complete training course on one of the oldest openings and as an invaluable reference guide. The French Defense is an opening you can play for life, at whatever level you are, so studying it is time well spent.

Fabien Libiszewski is a French chess International Grandmaster. He obtained his grandmaster title at the age of 25, in the year 2009. He is also a leading expert on the French Defense.

He learned chess from his father when he was a child, and he started competing in 1992 but he really only got seriously involved with chess in 2002.  When he decided to become a professional chess player, it wasn’t long before he started to obtain some great victories in tournaments and championship as well as international events.

He has won the Romanian Championship on three occasions and has played in Chess Olympiads ten times, winning a bronze individual medal in 1988. For several years he was an editor of the magazine Chess Extra press.

How do I benefit from this bundle?

If you’re looking for a reliable chess opening for Black against 1.e4, there are several reasons why you should consider playing the French Defense:

First of all, the French Defense is considered to be one of the most successful openings and has an excellent score in chess databases. That means that by playing it, you are automatically maximizing your winning chances statistically.

Secondly, playing the French Defense can be a vital alternative for all Black players who are tired of repeatedly entering the highly theoretical terrain of all the absolute main lines such as the sharp Open Sicilians or the Ruy Lopez.

Playing the French Defense does not force you to learn an endless amount of theory. It’s much more important to know the key strategic ideas and plans.

Every successful player has openings they can always rely on.

One they know inside-out. One that generates killer attacks, is easy to defend and comes with a ton of positional advantages.

This is a complete GM repertoire for Black, combining theory, ideas and model games to give you an opening you understand perfectly. All brilliantly explained by some of the world’s top experts on the French Defense.

Here’s what we’ve included in this bundle:

GM Damian Lemos is here to give you your first knowledge of the French Defense in this 7-hour Deep Dive.

This is an opening you can use for the rest of your chess life with good results, and it is flexible enough that you can play it in the style you prefer – solid and resilient, or dangerous and attacking!

And that’s not all – understanding the French Defense not only gives you a solid opening repertoire for Black, the various pawn structures that arise also helps you to become a better overall strategic player.

No need to fear 1.e4 anymore; add the French Defense to your repertoire and you’ll soon be dominating the whole board.

GM Lemos introduces you to the main ideas and plans behind the French Defense so you can start playing it in your own games without having to rely on boring memorization of variations.

Now you’re familiar with the key ideas, it’s time for this ultimate study of the French Defense. Over the course of 17 hours, Fabien reveals how to counter all of White’s setups from the main lines to the dangerous gambits and offbeat deviations. He leaves no stone unturned.

GM Libiszewski takes a holistic 3 step approach to teach you this opening:

Here’s what you’ll get with this course:

GM-backed lines will get you dominant positions… ready for you to convert ruthlessly with the strategic and tactical insights you learn here.

Knowing your opening inside-out means you save time and nervous energy during your first 15-20 moves… while your rival panics in the face of your super-strong moves!

GM Fabien Libiszewski reveals a ton of killer attacks that will stun and destroy your rivals! Takedown the Tarrasch with this f-file battery: 28….Qd1+!! 29.Kf2 Rxf4+! (Diagram)

Study this course and you will have an opening you can rely on in the biggest moments of your chess career.

Openings get you good positions, but tactics win games! Every opening has its own stock of tactical motifs. Therefore, you also have to know the typical tactical patterns which frequently occur in your opening.

GM Mihail Marin’s course on the essential patterns in the French Defense gives you a complete understanding of typical tactical and strategic patterns for both sides.

One of the most characteristic pawn structures of the French Defense arises after the moves 1.e4 e6 2.d4 d5 3.e5 c5 4.c3 (see the diagram below).

We’ve reached a pawn structure where the position is closed. White has a space advantage in the center of the board due to his advanced e5-pawn.

However, Black’s pawn structure is solid and without any weaknesses. Both sides have their own pawn chains, White’s being c3-d4-e5 and Black’s being f7-e6-d5.

White’s pawn chain points towards the kingside, which indicates on which side of the board he should play. White often gets good attacking prospects on the kingside.

A typical idea for White is to carry out the advance of the f-pawn with f2-f4-f5, putting pressure on the Black pawn chain.

According to GM Mihail Marin, there are two principled reactions for Black when he is confronted with a White f-pawn on the fifth rank.

One idea for Black is to capture on f5 with his e-pawn and to bring a knight to e6. Due to the fact that knights are excellent blockading pieces, the knight is perfectly placed on e6.

Black can sometimes keep his extra pawn on f5 for some time or even support it with …g6. What’s more, the move …exf5 allows Black to free his problem piece, the light-squared bishop, which then can be activated via c8.

However, one should remember that …exf5 is only reliable when there are no good immediate breaks for White with e5-e6 insight.

The structure with a closed center in the French Defense offers White another attacking plan. If the Black king has already castled kingside, a piece sacrifice on the kingside becomes an option for White.

With Black pawns on h7 g7 and f7, White has three targets for a sacrifice. The f7-square is usually well defended by a Black rook which decreases White’s chances for a successful sacrifice. Yet, with the Black king still in the center, a sacrifice on f7 becomes an option.

A sacrifice on h7 is possible on some special occasions. Usually, this sacrifice involves a White bishop on the b1-h7 diagonal, a White knight on f3 which can come to g5 with a check and a White queen which then joins the action on the kingside.

A key target for a White piece of sacrifice is g7. The g7-pawn has an important task to cover the squares h6 and f6. Once it is no longer there, White gets access to these squares – often with decisive effect.

The aim of this course is to improve your understanding of the typical tactical and strategic themes in the French Defense, as well as to practice them in the included quizzes featuring carefully selected test positions.

Thanks to the asymmetrical pawn structure which arises from most variations, the French Defense is an excellent opening to play when you’re looking for a win with the black pieces.

GM Damian Lemos, GM Fabien Libiszewski, and GM Mihail Marin will show you everything you need to know in order to play the French Defense like an expert and dominate your opponents.